Lawmakers, Hill staffers and police officers at the U.S. Capitol were in shock Wednesday in the aftermath of the early-morning shooting at congressional Republicans’ baseball practice. The attack left Steve Scalise, the number-three House Republican, and four others wounded and recovering in local hospitals. Many of the Congress members who had to hit the dirt to avoid being caught in the crossfire, kept their baseball jerseys and cleats on as they hopped from one cable interview to another at the Capitol, recounting how they survived, avoiding the bullets that hit the dirt around them.

“This is a horrible aberration, and it makes us fear for our security,” says a visibly shaken Rep. Chuck Fleischmann, who has cuts and scrapes on his arms and knees from hitting the dugout floor to avoid the bullets. While he talks to reporters, he’s still in a dirt-covered jersey emblazoned with the word “Republican.” The morning’s tragedy is just beginning to dawn on him. “Just a horrible … experience. And actually, now thinking [about] the magnitude of the shots that were fired and the carnage that was there, I’m still in a state of shock.”

Everything We Know About Alexandria Shooter James T. Hodgkinson

Fleischmann represents Chattanooga, Tennessee, which witnessed a targeted mass shooting in 2015 when Mohammad Youssuf Abdulazeez drove to two separate Marine centers and opened fire, killing four. In the aftermath of that shooting, just as in the aftermath of Wednesday’s attack, Democrats called for stricter gun-control measures, but Fleischmann and most others in the GOP have resisted.

“It’s about the person. We have people in this country, sadly, who have just a horrific value system – somebody like this, today, who would do that, people who engage in terrorism. They will unfortunately find their weapon of choice,” Fleischmann tells Rolling Stone. “What we need to do is focus on keeping Americans safe. But I am, and will always be, a strong supporter of the Second Amendment. Put it this way: If we had had more weapons there, we’d be able to subdue the shooter more quickly. Thank God that the Capitol Police were there and were armed, because otherwise we’d have had a situation where there’d be a lot more damage.”

After the shooting, House Speaker Paul Ryan canceled Wednesday’s scheduled votes, and the chaplain led a prayer for the victims on the House floor.

Party leaders also canceled other proceedings, like a hearing in a House Natural Resources subcommittee on a piece of legislation that would ease restrictions on buying silencers for guns. Currently, getting a silencer requires purchasers to submit to being fingerprinted and produce a photograph that’s kept on file, and the waiting period can last as long as nine months. The bill being proposed by Republican Rep. Jeff Duncan would do away with those restrictions.

The congressional baseball game – a century-long tradition to benefit charity – and the team practices are sacred to many lawmakers who say it brings the two parties together like nothing else in Washington.

“It’s one of the things that makes you feel more normal – the camaraderie that we have in the mornings,” Republican Rep. Pat Meehan, who wasn’t at practice Wednesday morning, says to a group of reporters before being overwhelmed with emotion and tearing up. “The camaraderie that we have in the mornings when we are there is such a change from the pressures that we all feel on a regular basis, and is kind of a return to the fun things. You know, Scalise is the Whip, but when we’re out there we kind of treat each other like we’re in high school again.” 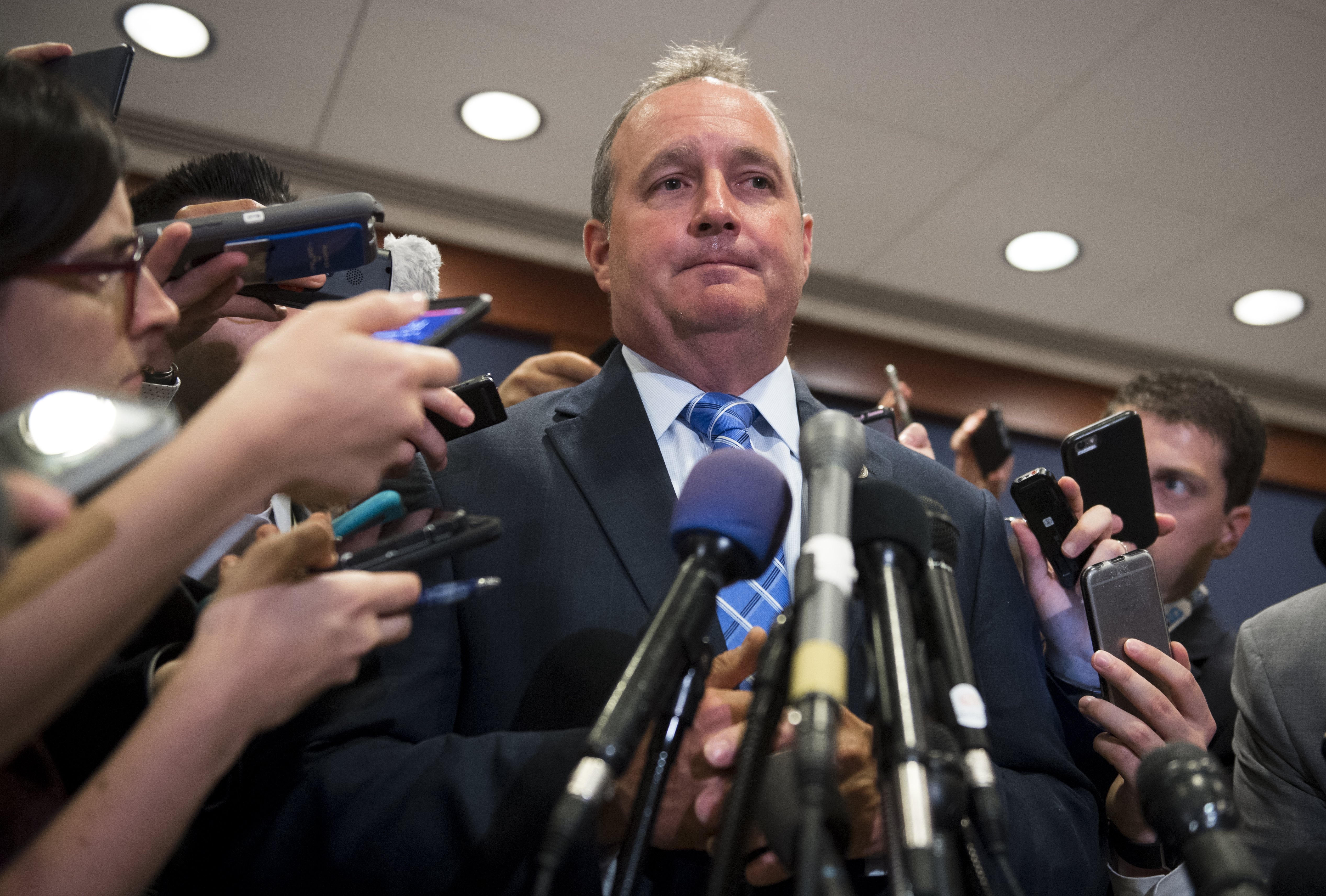 Duncan left the baseball practice just minutes before the gunman pulled out his rifle. “I’m shaken up,” Duncan tells reporters. A man whom Duncan later identified as the shooter had come up to the Congressman in the baseball field parking lot and asked if the players were Democrats or Republicans. “My colleagues were targeted today by somebody that wanted to kill them.”

Duncan is avoiding questions on his bill for now, but he says he expects the legislation to become more politicized in the wake of the shooting. “It always turns into that,” he says.

Other Republicans are avoiding specifics too. Rep. Rodney Davis, who represents the shooter’s home state of Illinois, was up to bat when the shooting began. “I heard a loud noise and thought it was a construction site dropping a large piece of metal, and then the next thing I heard was, ‘Run – he’s got a gun!” he says, still in his cleats and uniform. Davis gets heated mad when I ask whether there could have been greater carnage if the shooter had employed a silencer during his rampage.

“Come on, I’m not going to deal with policy issues right now,” Davis says. “We can discuss policy and policy differences all we want, but the bottom line, America saw a tragedy today that could have been much worse without the heroic behavior of the Capitol Police. And for your first question to be about policy, that’s crap.”

But some Democrats are eager to start the policy discussion. In the last Congress, they held a sit-in on the House floor after 49 members and allies of the LGBT community were gunned down at Orlando’s Pulse nightclub – a shooting that occurred a year ago this week. But after Democrats lost the White House in November, the issue has largely fallen off the radar. Democratic Rep. Carolyn Maloney, an outspoken gun-control advocate, says this is largely due to her party playing defense against President Trump’s agenda.

“We’ve been pretty busy in trying to save health care and trying to save the consumers, and the Consumer Financial Protection Bureau and other things,” Maloney tells Rolling Stone. “We have resisted, insisted and persisted every single day. And it has been a fight every single day. This is a different kind of fight. And it may reorganize the focus”  on gun-control efforts.

But getting the GOP to rethink gun measures historically has been tough. Maloney says Democrats are going to keep the issue in play and that they are working on grassroots efforts to make gun control a key part of the 2018 election. Still, she’s hopeful Wednesday’s tragedy will lead to some softening of hearts and minds on the other side of the aisle.

“I keep thinking – when Sandy Hook happened, I thought that would change the conversation. When our colleague Gabby Giffords was shot, I thought that would. I would think that this would change the conversation too,” Maloney says. “Democrats for gun safety were not opposed to people having guns that are licensed, and are for hunters and reasonable people. But we need background checks.”

Virginia Gov. Terry McAuliffe echoed that sentiment in remarks Wednesday afternoon. “Let me say this: I think we need to do more to protect all of our citizens. I have long advocated – and this is not what today is about – but there are too many guns on the street,” he said.