On March 4th, 2021 a member of the Helmand shura council was shot by unknown gunmen in the street, part of a gathering wave of targeted killings that have terrorized Afghanistan. “Abdullah,” a veteran Afghan journalist based in Kabul who was covering the story for a major U.S. newspaper, would normally contact colleagues in Helmand to verify details. Trouble was, all the local journalists he knew were gone, having already fled for their lives. Abdullah, who asked not to use his real name in this story for fear of retribution, was left to scrounge bits of information from relatives, neighbors, and social media posts. By day’s end, he found that at least nine people were attacked and three killed in Helmand’s capital of Lashkar Gah alone. “No one is reporting on the ground these days — no one,” he says. “Helmand has become a black hole.”

A Taliban stronghold and focal point of international press coverage for much of the war, Helmand is the most dangerous place to be a journalist in one of the world’s deadliest countries for media. Over the past year, 12 media workers were killed across Afghanistan – a more than 150 percent increase over the previous year. The pace of killings has accelerated since intra-Afghan peace talks began in September, and in the wake of a February 2020 cease-fire agreement between the U.S. and the Taliban that critics say encouraged the militants to operate with more impunity toward media and civil society. “The U.S. paved the road for these killings,” says one Afghan journalist in hiding, who asked not to be identified. “They abandoned us.”

The assassination campaign is undoing one of the great achievements of the post-Taliban era. Since 2001, Afghanistan has developed a free and vibrant media that is the envy of its neighbors, led by a generation of brave, capable reporters, many of whom received training sponsored by Western governments and news organizations. They have exposed official corruption and abuses of power, and tried to hold the Taliban accountable for war crimes such as civilian killings. Their knowledge, networks, and street savvy have been equally indispensable to foreign journalists trying to make sense of the country and its ever-shifting fault lines.

Now, the climate of impunity is driving more and more Afghan reporters to leave their jobs and lives behind. Over the past six months at least 50 have fled the country due to threats and insecurity, according to Nai, an Afghan media-advocacy group; others have been forced to move within Afghanistan or go into hiding. “The government is doing nothing to protect journalists,” says Nai director Mujib Khalwatgar, noting that none of the killers behind recent attacks have been credibly brought to justice. “Our success is becoming a failure.”

Taliban spokesmen deny responsibility for the surge of media killings, which have raised the death toll to more than 145 since the war began, but Afghan and U.S. officials and media watchdogs insist there’s plenty of evidence that militants are behind the majority of attacks. As peace talks stagger along, experts say the Taliban are keen to show the weakness of the Afghan government and remove those who stand for democratic values.

“The Taliban say that the realities of post 9-11 Afghanistan were created under occupation, and they are like foam on top of water: If you touch the water, [those realities] will go away,” says Tamim Asey, executive chairman of the Institute of War and Peace Studies, a Kabul-based think tank. “They are making a concerted effort to kill journalists, human rights activists, intellectuals, and academics to convey a message to the West and the new players of Afghanistan that these realties are temporary and will go away as soon as the U.S. and NATO leaves.”

The day-to-day risks are most severe for journalists working in Taliban-dominated provinces like Helmand, in the south of the country. But militants have also shown they can strike at will in urban centers, where they are disproportionately targeting women media workers. In December, Malala Maiwand, a reporter for Enikass TV and an outspoken women’s rights activist, was shot dead with her driver on her way to work in Jalalabad, the country’s fifth largest city. On March 2nd, three more female Enikass employees were killed in separate attacks on their way home.

“The Taliban and other groups are targeting women journalists because they believe they should still be inside the home, not on the frontline fighting for progress and human rights,” says Farida Nekzad, an award-winning editor and the director of the Center for Protection of Afghan Women Journalists. “Unfortunately, these killings have been especially effective against women.”

A recent report by the Afghan Journalists Safety Committee found that more than 300 women, or almost one-fifth of those who work in Afghan media, have quit their jobs over the killings and the coronavirus. Dozens of journalists from the provinces have sought anonymity in Kabul, a sprawling city of some 6 million people, though security there is scarcely any better. 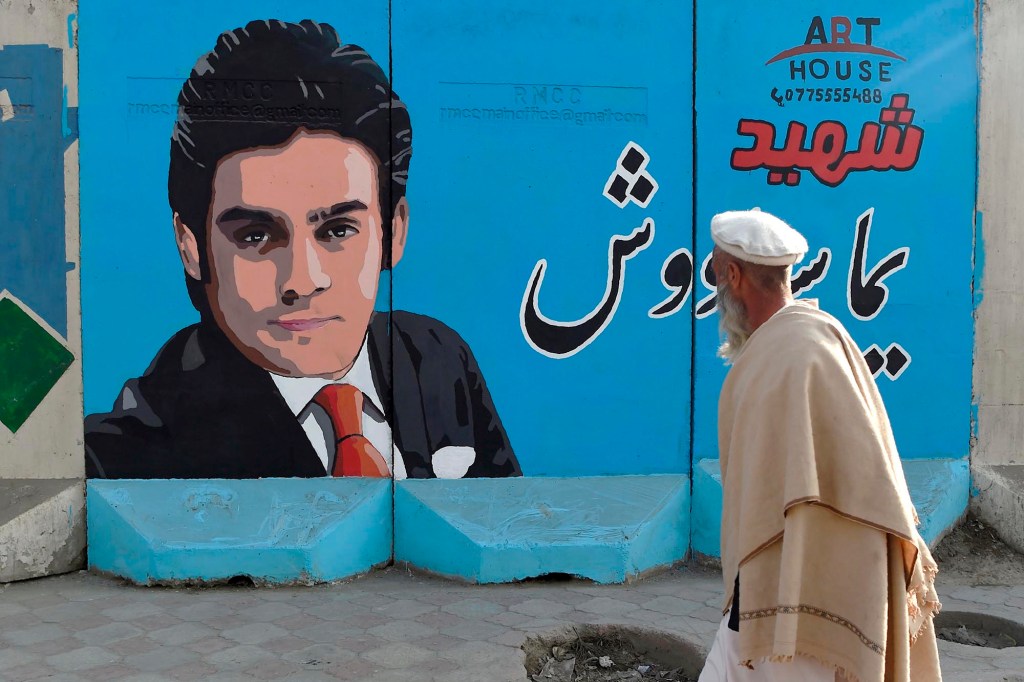 In this photo taken on January 19, 2021, a man walks past a barrier wall painted with an image of former Afghan Tolo TV presenter Yama Siawash, who was killed in a bomb attack on November 7, 2020, along a roadside in Kabul.

In November, Yama Siawash, a popular former presenter for Tolo TV, a private network funded in part by the U.S., was killed when a magnetically-attached “sticky” bomb exploded his car near his home. Afghan officials have reportedly confirmed that a Taliban cell was created to target journalists in the capital. (Assassins disguised as social workers have made house calls to do reconnaissance.) But journalists say the Taliban isn’t the only danger. Government intelligence agents have threatened, detained and beaten media staff, and powerful elites, and criminal groups are also exploiting the security vacuum to silence adversarial reporters.

In Helmand, the murder of Elyas Dayee has had the desired effect. Dayee, 33, a popular radio journalist for the U.S.-backed Radio Free Europe/Radio Liberty, was killed in Lashkar Gah on November 11th by a bomb stuck to his car. He had told colleagues the previous month that the Taliban had warned him not to report on their operations in the province – specifically any loss of territory and the deaths of Taliban fighters, or anything that would suggest the militants were violating the terms of their deal with the U.S.

Since Dayee’s murder, death threats against journalists in Helmand have intensified. Zainullah Stanikzai, a Reuters stringer based in Lashkar Gah who has been trained by U.S. and British organizations, says he was informed by Afghan intelligence that he was on a Taliban hit list. Stanikzai, 40, moved his family to Kabul, but continues to receive threats from militant accounts on Twitter and Facebook. “I’m still afraid,” he says, “but at least I’m in a big city.” He works the phone each day to track developments in Helmand, but worries that without being there he could soon lose his job.

Most of his days are spent chain-smoking with Abdullah and other Helmandi transplants in a nondescript compound. The walls are lined with a portrait gallery of Afghan journalists killed on the job: Abdul Samad Rohani, a BBC reporter shot dead in Helmand in 2008; Maharram Durrani of Radio Azadi/RFL, killed in an April 2018 double suicide attack in Kabul that claimed nine other journalists, including Shah Marai, AFP news agency’s chief photographer; Siawash, and many more. A giant poster with a picture of a smiling Dayee reads, “A strong voice of freedom was silenced.”

To pass the time, Stanikzai and his colleagues take online English classes, on the chance they might one day secure asylum in the U.S., Canada, or a European country: a long-shot. The number of visas issued and Afghan refugees admitted was reduced to a trickle under the Trump administration. The application process remains notoriously slow and time-consuming (and non-immigrant visa interviews are suspended due to coronavirus). “Getting a visa is a dream – it feels impossible,” says Ahmad Shah, another Helmandi radio journalist on a Taliban hit list (Afghan intelligence alerted him). Cynical about his prospects at the U.S. Embassy in Kabul, he may join others who have decamped to Turkey, India, and Uzbekistan to lay low.

For his part, Abdullah just returned from a month-long break in Pakistan after learning from well-placed contacts that he, too, was on a hit list, he says. With 14 family members to support, he continues to report, albeit in a limited capacity. He rarely leaves the office, takes different routes to work, and never parks his car in the street unattended. Hardest of all, given his defiant nature, he has stopped publicly speaking out against enemies of the free press. “Dayee’s killing broke me,” he says.

I met Abdullah six years ago while reporting a story about civilian casualties from a joint U.S.-Afghan raid. Having started as a radio presenter in Helmand back in 2006, he’d taken advantage of U.S. and British-sponsored training in investigative journalism and hostile environments to become one of the country’s best. His English is still a bit coarse, but his vast network of contacts and gift for ingratiating himself makes him a huge asset to Western journalists. Whenever we team up on stories his instincts are unerring, with a calculus for risk that is bold but never reckless, leavened by a sense of humor that is grounding in times of stress. 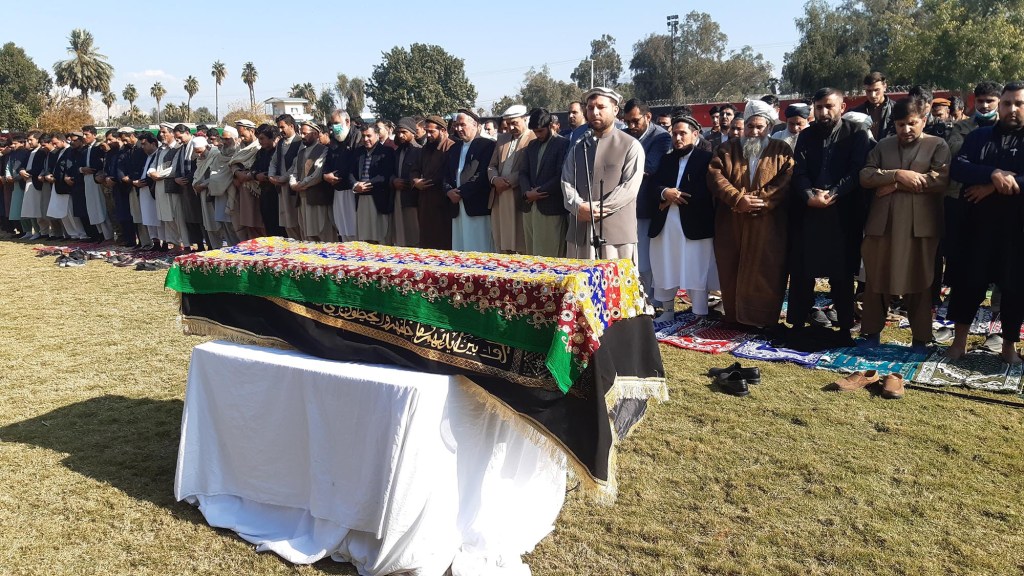 People attend the funeral ceremony of Malalai Maiwand, a journalist at Enikass Radio and TV in Nangarhar, after she was killed along with her driver in an attack on their vehicle in Jalalabad.

These days, the fear never fades. On the scene of a recent bus bombing in central Kabul that left three commuters dead and 12 wounded, Abdullah hung back on the periphery, scanning the crowd uneasily as photographers snapped pictures of the blood-streaked wreckage. Three years ago, he lost several close friends at a similar scene when a second-wave attacker blew himself up in a crowd of reporters. “I used to handle my work, no matter what I saw,” he says. “Now, I can’t control myself. My mind is not working.”

Abdullah’s disquiet has impacted my own ability to work effectively. To keep him out of unnecessary danger, and with a shallow pool of Afghan journalists to call on, I enlisted a “fixer” of dodgy reputation to assist me on my last trip to Kandahar, the southern province where the Taliban is gaining ground. It was a fiasco. The stand-in fixer alternated between bouts of panic and naked manipulations, ultimately putting money ahead of safety. Drained of confidence, I let him go, the reporting incomplete.

As more seasoned Afghan media workers flee or go to ground, the depth and quality of information coming out of the country is diminishing. At a pivotal point in the war, Afghans are bereft of ground-truths needed to make critically important decisions. Meanwhile, news consumers and policy makers in the U.S., possessed of an increasingly vague awareness of a drifting conflict now entering its 20th year, have even less to consider as the future of the U.S. military in Afghanistan hangs in the balance.

President Biden has a May 1st deadline to decide whether American forces will stay or leave for good, bringing an end to the longest war in U.S. history. If the mission is extended, which appears likely, the Taliban has pledged a severe “reaction.” For Afghan journalists under attack from without and within, it’s hard to imagine conditions getting any worse. “I wake up everyday thinking it could be my last,” Abdullah says. “How can we protect ourselves? How can we survive? These are the questions we are asking.”