It’s the People’s House, but the terrorists behaved as if only they should have the keys to the Capitol. One man sat in Nancy Pelosi’s office, his feet contemptuously propped up on her atop the desk and a smile on his face. Others charged at a member of law enforcement, left alone and unable to handle the mob’s surge. We saw them literally on the walls, hanging from a ledge in the Senate chambers or outside, swinging on the scaffold. Others took selfies and souvenir photographs, as if the mob’s intrusion were merely some Capitol tour gone awry. A door featured the newly scrawled threat: “Murder the Media.” Others were seen with guns, and zip ties, apparently prepared to take hostages. Washington, D.C., police found explosives near the building. A man stood where Vice President Mike Pence typically sits in the Senate chamber, taking it upon himself to declare that Donald Trump had, indeed, won an election he lost. The entire scene was a violation in the purest sense, and on top of all that, the lack of protective face coverings amid the pandemic betrayed both a lack of sense and shame.

These people did this because they could. What we all witnessed on January 6th was not so much white extremism as the natural and inevitable result of white entitlement, a group of people putting into action their belief that they’re the only ones with the right to pick this country’s leadership. They’re reinforced by a president who found political prominence by claiming the first black president of the United States was born in Kenya. They’re validated by pro-Trump lawmakers who continue to insist the only way they could lose an election would be for someone else to steal it. Then, this country and its a la carte system of law and order affords them special privileges they are scared to lose. The 2020 election represented a rare denial of white privilege, and Trump and his supporters have lost their minds because of it.

Trump, as he does, channeled that insanity for the ugliest possible purpose.

He himself invited them to invade, both via a tweet in December and earlier that same January morning during his speech, so they had no fear of reprisal or consequences. Contrary to the feigned confusion offered Thursday morning by the Capitol Police chief, the entire nation knew that this was possible. Having discussed it online for weeks, Trump MAGA sycophants told us they were going to be there on January 6th and what they planned to do.  And with the overall passivity, permissiveness, and lack of preparation on display, the law enforcement on hand made clear that they didn’t consider a massive mob of white people to be a threat. The lack of competence was so egregious, it invites accusations of collusion.

“It is unavoidable to question whether or not there were law enforcement people who were complicit with these actions or was this a total intelligence, tactical and response failure,” said Marq Claxton, a retired New York Police Department detective who now works with the Black Law Enforcement Alliance. “The post-incident analysis should include the removal of the entire executive management of the Capitol Police, because they not only endangered our government and its officials and properties but they also failed to provide even the minimal amount of protection to the frontline officers. This failure cannot go unpunished.”

Four people lost their lives during the attack, including one woman shot to death by a Capitol Police officer. However, not even the death of four people deters the Trump army from the plans for sedition. If anything, those deaths may prove to be an accelerant the burning fire since any supremacist cause requires violence to succeed. Inherently, it is force used to protect and expand power. The people committing these acts at the Capitol, as well as the president and other members of Congress who incited them to riot, surely understood that.

Equitable law enforcement might help. Days after prosecutors declined to charge a Kenosha, Wisconsin police officer for shooting and paralyzing Jacob Blake last summer, we saw these white thugs handled, comparatively, with kid gloves. Only 54 arrests were made, which should stupefy anyone who saw the images from that day. A viral video let us all see one cop allowing a Trump supporter take a selfie with him. Another showed others opening the gates for the rioters.

Phillip Atiba Goff, a Yale professor and the co-founder and CEO of the Center for Policing Equity, said that race was clearly a factor. “If you look at the pictures of how law enforcement was set up to protect the Washington Monument or the Lincoln Memorial when Black Lives Matter protesters were walking past it,” Goff said, “it was all more militaristic than when armed white supremacists told us they were going to storm the Capitol in order to interrupt democracy.”

The mob succeeded, if only briefly, in delaying the confirmation of the victory Joe Biden and Kamala Harris won in November’s election. There was little resistance to the flood of white noise spilling into the Capitol, designed to obscure the black and brown votes that had ended their idol’s rule. The invalidation of votes is the erasure of people who they deem inconvenient to their vision of America. Spurred on by their elected officials, they issued an uncompromising ultimatum to black and brown people who have the nerve to consider ourselves Americans. It seems that only they, and others like them, are fit to select a president.

This was a predictable culmination of Trump’s presidency and his inflammation of white resentment since his birther days, and the flowering of what Republicans have sown for generations now, since the aftermath of the 1964 Civil Rights Act. This will be only the 56th year of American history in which any semblance of true democracy has existed, and that has been more than enough for Trump, his acolytes in Congress, as well his mob. Several Republicans, even after Wednesday’s catastrophe, kept toying with a conflagration that they never had any intention of controlling or containing by continuing with their futile objections. 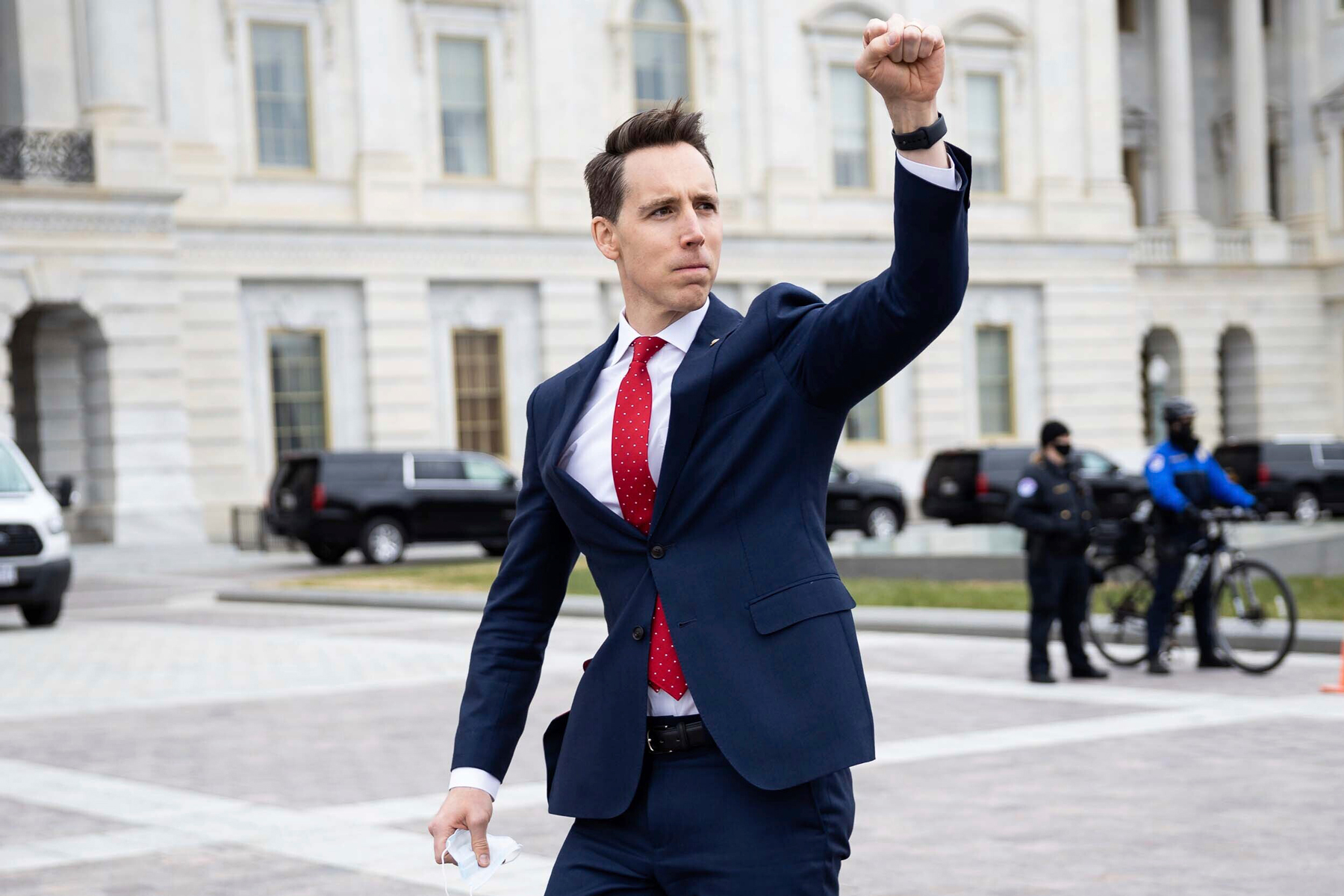 Sen. Josh Hawley (R-Mo.) gestures toward a crowd of supporters of President Donald Trump gathered outside the U.S. Capitol to protest the certification of President-elect Joe Biden’s electoral college victory, before they breached security. Jan. 6, 2021 at the US Capitol in Washington, DC.

Every concern about Trump ascending to the Oval Office had been validated long before the president helped incite a terrorist attack on his own country. The slogan that Trump has promoted, Make America Great Again, has become an oxymoronic signature of those who seek to stunt the nation’s growth and progress. These MAGA followers are the anti-patriots, willing to align themselves with some of this nation’s most murderous enemies in order to achieve the America that eludes them.

“Black folks organizing up around issues of power are threatening to the core of what many in this country believe the country is about. And white folks organizing around deranged conspiracy theories that support only a white supremacist, a eugenicist notion of what America can be, is less threatening than that,” Goff added. “Violent protests for the sake of white supremacy are less threatening to many in the state than peaceful protests for the idea that Black lives should matter.”

Wednesday’s domestic terrorism was the largest attack on the American federal government since September 11, 2001, and the only incursion on Capitol grounds since it was burned by the British in 1814 during the War of 1812. That is where these Trump supporters, as well as their president and other Congressional instigators, now reside in history. A presidency built atop a bedrock of lies and promoted from the beginning as insurrectionist has culminated predictably, in an attack on the very democracy they claim has been stolen from them.

The president — who should resign or be immediately removed from office, as well as prosecuted — egged them on with since-deleted tweets. It only made the situation more grotesque. His Rose Garden video professing his love revived memories of his “very fine people” remark in 2017, and now he has his own personal Charlottesville.

Josh Hawley is the 41-year-old Missouri senator who was the first to declare that he would contest the results of the 2020 election. He gave a speech that accurately described the people for whom he was fighting. However, it was nearly a year ago, and he was talking about Hillary Clinton supporters.

Those who sought Trump’s impeachment, Hawley alleged, “cannot accept the verdict of the people” and they wanted “to overturn the election and entrench themselves in power.” It is an apt description of the terrorists who ransacked the Capitol on Wednesday, as well as their dear leader.