Trump Still Wants to Be President, But He Never Wanted the Job - Rolling Stone
×

Campaigning requires compassion. The same goes for governance. Neither Donald Trump nor anyone in his orbit have yet come to this realization, surviving instead on their stale brand of Fox News testosterone. Sure, that message still can draw a lot of (white) people on a frigid weekday evening, especially if you can bus them in yourself. But Trump also needs to have a plan to get them home, and, well? There’s the rub.

For more than an hour after his Tuesday-night rally ended on the tarmac at Omaha’s Eppley Airfield, attendees were still waiting for buses to take them home. The president had long since left on Air Force One, but several people began requiring medical attention. At least seven people were reportedly sent to area hospitals. The last of the crowd didn’t clear the site until 12:30 a.m., according to The Washington Post — more than three hours after Air Force One had taken off.

Jon Stewart Cautions: It's a 'Mistake' to Focus Only on Trump

Now consider that those are the people who Trump actually cares about, or so he would have us believe. It is the literal leaving them in the cold that seems the worst political sin, but assembling the largely maskless crowd estimated in the tens of thousands with no social distancing in sight is what we strangely come to accept. His flocks assemble, largely unmasked, as their hero tries to run for re-election during the raging, murderous pandemic and despite the advice of medical professionals who might dare warn of the dangers. This contest scheduled to come to a conclusion next week has been less between a Democrat and a Republican than between those trying to survive and a president watching his own nation atrophy on his own watch. The nearly four years in office have not been a teacher for Trump, but we should have learned something. Those of us who have survived it, at least. All he appears to desire is great power, without great responsibility.

Another example arrived that same Tuesday, before his Omaha rally. The White House declared victory over Covid-19. Who knew that all it took to cure it was a press release? The Office of Science and Technology Policy, to the extent it still exists, put “ending the Covid-19 pandemic” atop a list of Trump’s first-term accomplishments, adding that the administration has “taken decisive actions to engage scientists and health professionals in academia, industry, and government to understand, treat, and defeat the disease.” This is their claim, even as the pandemic is arguably worse right now than it has ever been inside the United States. The nation set an unfortunate single-day record of 83,000 newly reported infections last week. According to the Johns Hopkins University Covid-19 Dashboard, more than 227,000 people have died. Still, Trump, despite having suffered the disease himself, talks to his denizens as if there is nothing to worry about. It’s “rounding the turn,” he claims.

We are past the point of considering whether this is political suicide. Once we all wondered why Trump’s career was able to withstand such obvious missteps and horrific errors, and why someone who has steered a country to this kind of calamity is even considered a viable candidate. Part of that continued quandary has to do with the nation’s puzzling resistance to understanding its own racism, and how it works within our politics. Trump wasn’t able to endure endless scandals and bankruptcies as a real-estate baron simply because we are infatuated with fame and wealth in this country. Whiteness works.

Unfortunately, having used racism as a tool for so long, Republicans got lazy. Once the proponents of a more pure version of small-government conservatism — one that still believed in public service and had not yet submitted completely to kleptocracy — the political right and the party that represents it have found their apotheosis in Trump. Why shrink the size and function of the state bureaucracy when you can merely keep it big, but only help the people you like? Why shrink the federal government to the point where you can drown it in a bathtub, as Grover Norquist once morbidly put it, when you can let the states and municipalities simply handle absolutely everything? Dispense with any and all intellectual honesty. Just hold onto power, grow it, and don’t bother with all the governance. 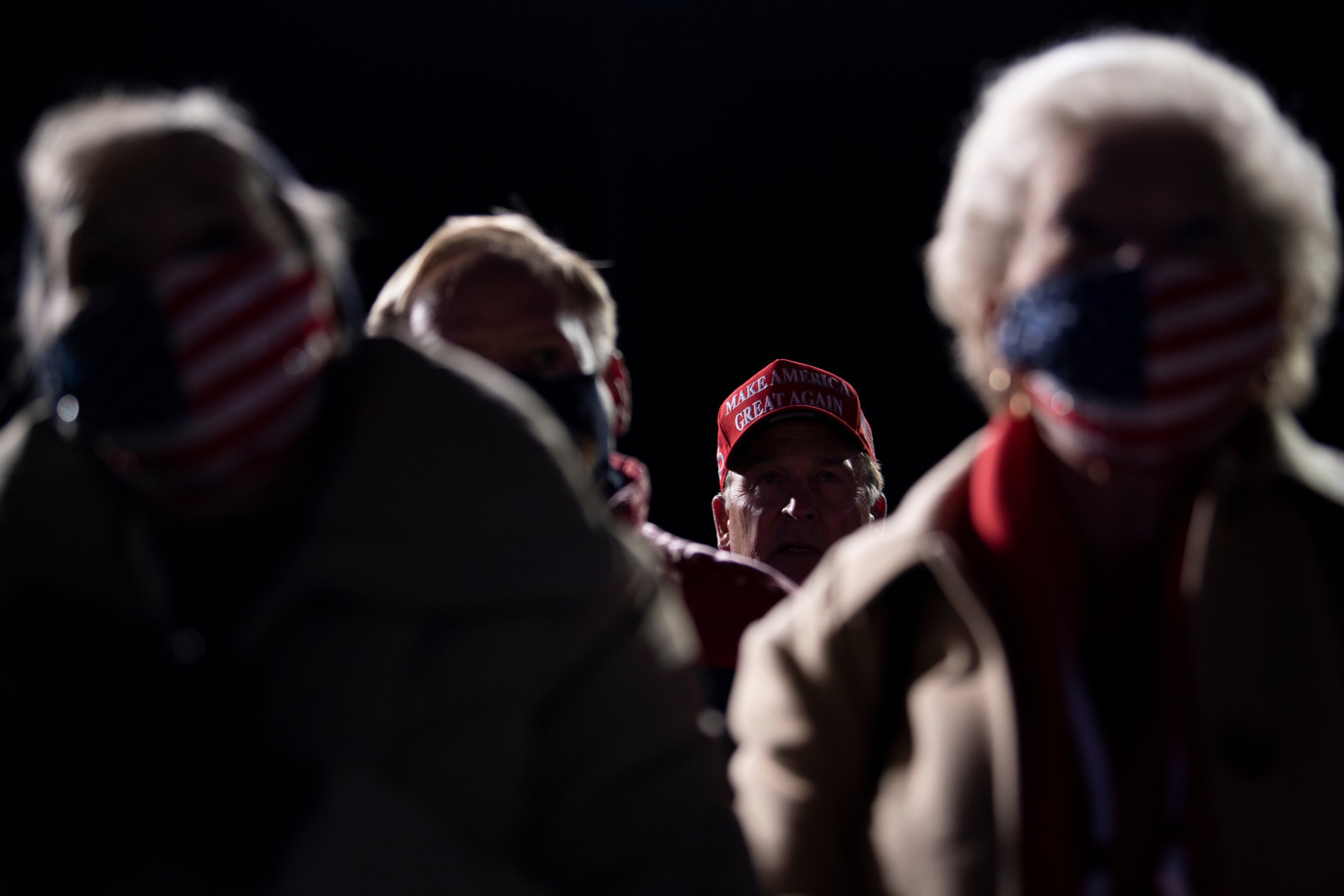 It’s why all Mitch McConnell cares about is handing out lifetime appointments to judges and Supreme Court justices who can reshape America, undemocratically, from the bench. It’s why Education Secretary Betsy DeVos, in a recent Reason interview, said about her own department that “this building has caused more problems than it has solved” and called for its elimination, saying that “I would not be at all unhappy to work myself out of a job.” It’s why we don’t see Republicans seeking to, in any way, expand their voter base. Remember that GOP postmortem “autopsy” after Mitt Romney’s 2012 defeat, that uncommon piece of self-reflection that recognized openly how difficult it would be for the party to ever win another presidential contest so long as they kept alienating women and people of color with their bigoted agendas? Well, Trump essentially defecated on that in 2016, and challenging for the presidency in the first election in 50 years without the full protections of the Voting Rights Act, he prevailed thanks to the antiquated Electoral College — a curable cancer from which our democracy continues to suffer, unnecessarily. Such lasting mistakes of our Founders, their failures to place guardrails to protect against those who might pervert the very idea of public service, is why we see the Senate majority leader prioritizing a Supreme Court nomination over pandemic aid. “By tomorrow night, we’ll have a new member of the United States Supreme Court,” McConnell said the day before Amy Coney Barrett’s Monday confirmation, speaking as if she were a trophy. “A lot of what we’ve done over the last four years will be undone sooner or later by the next election. They won’t be able to do much about this for a long time to come.” This kind of gloating not only further exposes their reasons for appointing an ideological extremist like Barrett to the Court, but also speaks to a willful perversion of democracy. McConnell wasn’t merely taunting Democrats, but the voters who will be unable to change a thing about the judiciary he and his Senate colleagues have shaped (unless a President Biden, Vice President Harris, and a Democratic Senate push to expand that judiciary, which they damn well should).

The president, last week, also suddenly removed civil-service protections for experienced career federal employees, some of whom the country has relied upon for several administrations — enabling him to possibly flood agencies with his less competent cronies. This is whether or not he wins or loses the election, even as a lame duck who would surely sabotage Washington’s works for the incoming Biden administration. I sincerely believe this is a president who couldn’t give a good goddamn whether or not the government he runs actually functions properly, whether or not he is in charge, unless they are the agencies that do what he appears to actually enjoy: separating immigrant children from their parents, for instance, or firing tear gas at civil-rights protesters. He recently celebrated the unconstitutional murder of a suspect by federal law enforcement, so that, as well. And if re-elected, he’ll keep using this country as if it is his personal real estate — handing out long-protected areas like Alaska’s Tongass National Forest, as his administration announced Wednesday, to industries that damage our environment and speed up climate change.

Trump’s racism and bloodlust, along with his obvious addiction to celebrity and power, is what may explain his desire to keep this job. So, too, may be a desire to escape criminal prosecution for his misdeeds. However, his first term has been a giant billboard advertisement for competent governance, of any size and shape. And that is something that Trump is simply unwilling and unable to provide.

It would be pleasant, in a way, to be able to live in the kind of unreality that Trump exists in perpetually. He has tried to invite us in, and folks like those assembled on that Omaha airfield wanted to join him in his delusions of grandeur. His supporters want the America he promises, the one in his head, a nation of fantasy and lies, where Covid-19 is cured and those discussing it ad nauseam are just trying to injure the image of their savior.

The polls say that most Americans want to return to a pre-Covid nation, but that is a fantasy. Yet that’s the specialty of the Trump presidency, indulgence in lazy thinking that says that making America great, again or at all, is easy. It may be how Trump himself has been allowed to think, experiencing an elephantine version of white privilege for all of his life. But not even those watching him take off from Omaha can touch that, and some just might realize that one day. Hopefully, not before they’re intubated in a hospital bed.

A president can be elected to make white people feel superior to everyone else, but it doesn’t make it so. He can say it’s morning in America, but he can’t bring back the sun. Similarly, Trump can tell us that things are A-OK, that the economy isn’t still in crisis. But actually digging us out, and creating an America that is better? That requires a federal government that functions properly and a safety net that Republicans have worked consciously to erode. Normalcy only arrives if a president does work that Trump doesn’t want to do. We can’t just fly off into the night, without a care in the world. The rest are still down here on the ground, in desperate need of warmth and shelter.