As the definition of whiteness in America has expanded over generations, the unearned advantages that come with it become harder to kick. While racism is rightly regarded as a social disease, the privilege that it affords white people can be more like a drug. So even when Donald Trump becomes an obviously horrid president whose policies hurt even some of his own voting blocs, there are many who won’t give up the sweet taste of superiority over other groups — immigrants of color, African Americans — whom he marginalizes even further.

That’s one big reason why, rather than recoiling from the injuries Trump is inflicting upon the rule of law, his nearly monochromatic base is following his example, mistaking actual moves towards equality, legality, and public safety as encroachments upon their freedoms. Doing so is not merely unpatriotic in the sense that they favor party over country — such indulgence edges us closer to authoritarianism and fascism.

That indulgence is evident this week as Trump’s backers and apologists put both their white privilege and white fragility fully on parade. Whether in the form of a rigged trial or an armed demonstration, groups that primarily represent the interests of white Americans have behaved as if the end times are coming. They aren’t under any real threat, yet they have reacted with the kind of fervor and extremism that nonwhite groups with valid grievances couldn’t dream of displaying.

The most visual example of this surfaced on Martin Luther King Jr. Day in Richmond, Virginia’s state capital, where tens of thousands converged. It was an armed flood of (mostly) white men protesting announced planned gun-control measures for the state, such as universal background checks and bans on military-style assault weapons. Media outlets deemed it peaceful because we didn’t see Charlottesville redux, but I’ll be damned if I subscribe to some notion that hundreds of thousands of angry white men with guns storming into town is in any way “nonviolent.” 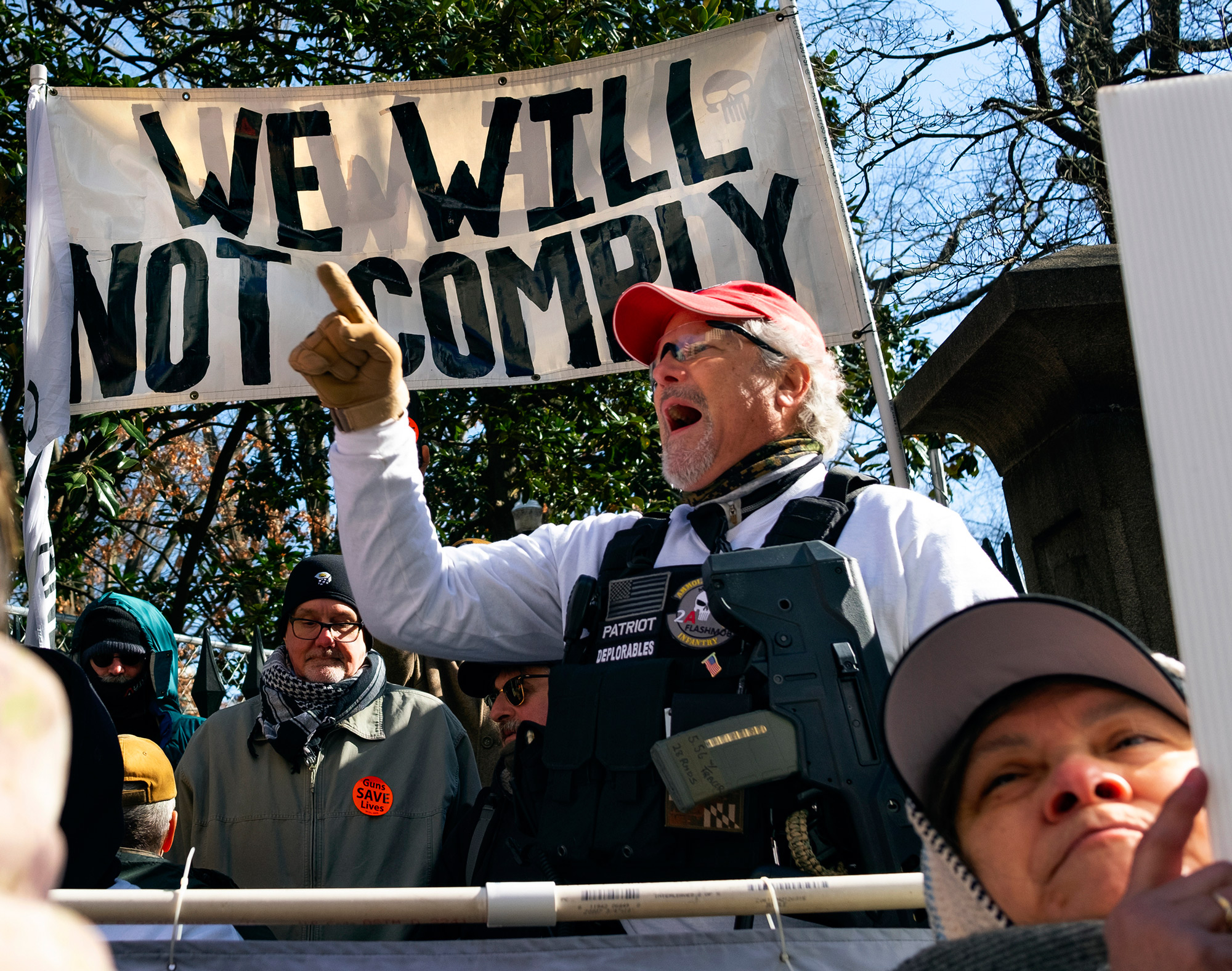 A protester yelling “We will not comply” joins others as they gather on January 20th during a rally at the state capitol in Richmond, Virginia.

A bunch of these guys showing up with weapons and tactical gear sends a message. Guns are inherently a tool of death, if not mere intimidation, so it isn’t just an expression of First Amendment rights when folks exploit their Second Amendment rights in this way. It is extreme, if not classifiable as extremism, when white men react to a small-d democratic result with the threat of violence. In last November’s election, Virginia put Democrats in charge of the state legislature for the first time in 26 years. Since then, pro-gun activists have threatened to kill a state lawmaker, and others have intimated that civil war is afoot.

(Even the Black Panthers in 1967 Oakland, protesting Gov. Ronald Reagan with guns in hand, were more careful. Imagine if black Americans today reacted like this to every election result that, in actuality rather than in theory, worked against their interests. Perhaps we would have seen those gun-control measures a lot sooner.)

However, we miss the larger point when we ask why this development seems to upset not merely a group of gun enthusiasts that happens to be overwhelmingly white, but also anti-government militias and white supremacists like the Proud Boys. This wasn’t so much about the fear of losing one’s firepower as it was about the threat of losing one’s white power. Hence, despite Richmond’s population being half black, it is easy to see why hardly anyone who wasn’t white showed up to this “rally.”

Another place where black folks are scarce is the United States Senate, where only three — Republican Tim Scott and Democrats Cory Booker and Kamala Harris — are currently seated. The impeachment trial and the Virginia event share not only a dearth of black people, but an excess of white fragility. They both speak to the extremes that our society permits white people in power, whether granted by gun or government, to assert themselves when that power is challenged or held to account.

The president’s defenders, chief among them Senate Majority Leader Mitch McConnell, have already begun rigging the impeachment trial for him. They are blocking witnesses who Trump has said should testify, all while using histrionic and extralegal rhetoric to imply that what’s unlawful is the constitutional process of impeachment.

On Tuesday, Republicans voted along party lines to bar subpoenas for acting White House Chief of Staff Mick Mulvaney and former National Security Council chair John Bolton and delay a decision on others until later in the proceedings.

They did this even in the face of strong public opinion in favor of an actual trial. Trump, unable to help himself, even bragged about withholding evidence from an impeachment trial in which one of the two articles is about his obstructing justice.

Forget, for a moment, that a president being impeached should have no say whatsoever in who is called to defend or oppose him on the stand. People are allowed to weigh in on who defends them, but not to pick witnesses for the prosecution. That kind of freedom, especially if you aren’t Donald Trump, is unimaginable. We still live in an America where the racial disparities in criminal-justice outcomes are so stark that the United Nations released a report in 2018 concluding that black defendants were nearly six times as likely to be incarcerated than white defendants. For Hispanic people, it was only half that much, but still.

I would argue that the Senate impeachment trial is about to be a funhouse-mirror version of the injustices we see daily in our criminal-justice system, where defendants of color hardly ever experience a fair and evenly weighted process — let alone a Trumpian version that favors the defendant. It isn’t surprising to see a wealthy white man who has thus far escaped any serious consequences for his corporate corruption or the allegations of sexual violence against him feeling like he can dictate the terms of his own judgment, whether or not he is president of the United States. However, rather than recognizing that prerogative as harmful to a fair and legal proceeding, McConnell and company have busied themselves with covering up the president’s crime and ensuring that the public doesn’t care that they did so.

This is shaping up to be what the Rev. William Barber, the noted civil rights leader, likened Tuesday to the show trials of the Jim Crow South, which ensured racists went free for their provable crimes. The Trumpian era has made the inequities of our jurisprudence even more stark, but this has only encouraged more Americans to emulate the president’s behavior. As with the attempt at violent intimidation in Virginia, we are seeing what happens when misguided feelings of persecution coalesce with an entitlement granted by an America that so often tells men like this that they can do no wrong.

There is the possibility that seeing this all play out can change things. Virginia is one of the states most plagued by gun violence and mass shootings and one that has been most bereft of laws to combat them. The citizens did something about it. Trump’s presidency, carrying the mark of impeachment, may not survive another election.

However, I suspect that we would be ignoring generations of history were we to presume that America at large will see these events splashed on television and across headlines, and suddenly wake up to the evils of unchecked and extremist white power. Showing America its own ugliness, too often, has only encouraged it to disfigure itself even more.