President Trump and his Sharpie struck again Thursday, this time at the now-daily task-force press conference inside the White House. But this time, rather than attempting to redefine the projected path of a hurricane, he clearly wanted to redirect a national conversation. A Washington Post photographer discovered that in at least one place where “coronavirus” appeared in his notes, Trump crossed out “corona” and replaced it with “Chinese.” 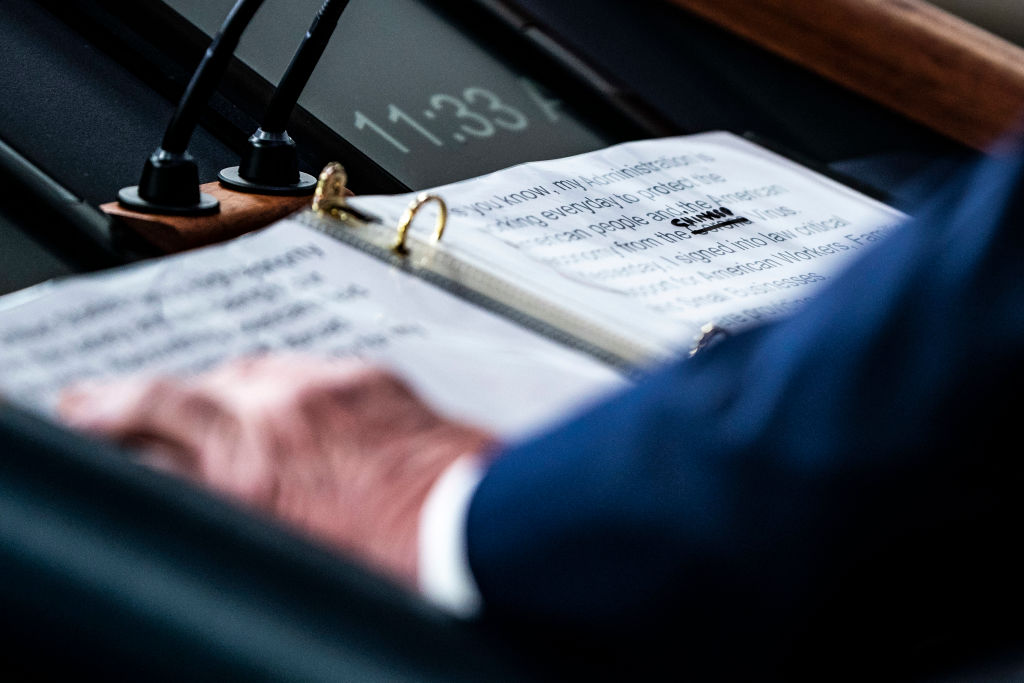 The previous day, Trump defended his politically and factually incorrect label. Yes, “It’s not racist at all,” he said. “It comes from China, that’s why.” While researchers have traced the virus to a Wuhan market and Chinese officials bear considerable responsibility for concealing information and exacerbating the pandemic’s spread, Trump is only compounding their error by choosing to lie to his constituents. The geographic excuse is one of his favorites, despite the fact that pandemics such as Ebola and the Spanish flu are misnomers. Those three examples are just some of the reasons why the World Health Organization is now responsible for naming diseases, and did so with COVID-19 on February 11th. Since then, Trump’s Sharpie and his mouth have gone to work.

Journal of a Progressive Prepper

Can This Air Purifier Protect You From Covid-19?

Trump gleefully fielded a softball from the sycophantic far-right One America News: a sardonic query about whether the term “Chinese food” was racist, then a false accusation that the “major left-wing news media” has embraced “Chinese Communist Party narratives.” That cued Trump to launch a long, self-aggrandizing, and false rant against the press, which was neither original nor worth repeating.

Disparaging the media, which Trump continued with an unprovoked attack on an NBC News correspondent on Friday, conveys to his constituents that they should (further) distrust press reports at a time when most about him are negative. And the racist moniker for the coronavirus gives those folks someone to point at when they or their loved ones get sick, even when a more attentive and acute federal response to the viral threat may be more to blame. But racism and authoritarianism are not only ideological siblings — they also soothe insecure leaders like Trump who cannot stand to hear one negative thing about himself or his performance.

Just more than half of about 500 people polled by CBS News now approve of what he’s doing to address the pandemic, so something must be working. (It sure isn’t the actual government response.) But Trump and his Republicans have no idea what to do besides feed their corporate buddies more tax breaks and use bigotry to prod low-income white voters into going along with it. Their entire philosophy has revolved around deconstructing effective government and getting enough voters to help them fuel plutocracy. Racism is an essential tool for them, but this president is what baseball talent evaluators might call a “one-tool player.” Inflaming division is what this president does because it is virtually his only discernible political skill. Responsible governance and public service are both foreign to Trump, and perhaps that is why he appears to hate them so much.

We would be foolish to expect Trump to change, but we have less time than ever for him. The virus is killing more Americans every day, and every day his failure becomes more complete. This is nothing to celebrate. But since racism is at least as urgent a crisis as this pandemic, we also don’t have time for the irritating habit that surfaces among political writers and commentators whenever Trump decides to be publicly racist. Rarely do any of them pressure him to resign over it, which they should. While it may be evident that Trump uses bigoted speech and actions as weapons of mass distraction, often deploying it to provoke the kind of liberal outrage that writes its own headlines for America’s media content factory, it is hardly ever regarded as a central fault of his administration or personal performance. Instead, the ways in which Trump uses race and racism are regarded as niche stories, somehow beyond the “kitchen table” concerns of “ordinary” Americans.

That mindset is curious, to be sure. But it also is so pervasive among these thinkers who tell us to dismiss or ignore Trump’s racism, regarding moments like this “Chinese virus” episode as a “gullibility test.”

That is how The Atlantic’s Graeme Wood termed it, alleging that this “Chinese virus” episode is a red herring intended to shift the public’s eyes away from the government’s utter lack of preparedness to handle a pandemic that now threatens to kill millions of them. It is a tempting argument because it inherently makes the person who adopts it look like the Better Man, rising above Trump’s baser appeals to focus on the nation’s more pressing concerns. But in America’s relatively short history, what problem has endured longer than bigotry, systemic or otherwise?

Wood, who is of Asian descent, urged readers this week to “avoid the elementary trap of getting bogged down in the septic slop of Trump’s latest tweet.” Instead, he argued, we should be offended by the administration’s negligence and focus upon the urgent tasks at hand. But when did Trump adopting a racist moniker for the virus become separate from his seeming inability to combat that virus? None of us should not mistake skepticism of Trump’s racist behavior with an effort to resist it. No bigotry, or system infected with it, ever faded away because people chose to ignore it.

There are so many Trump failures for which to account, but it is relatively easy to examine and condemn his racism while keeping a larger context — in this case, the coronavirus pandemic — in perspective. It is clear that Trump’s blasé approach to the virus wasted time and likely cost lives, and his racism is just another method of delay as he searches frantically for a way out of this.

I don’t think that Trump is searching for a “solution,” at least one that a public dealing with his crisis is demanding. We always have to view success in a different way for Trump, as for him that means breaking unions, closing borders, and taking other essential steps toward a nationalism rooted in white patriarchy. He hasn’t deviated from his pursuit of that endgame, even as he fails to meet the challenge of protecting Americans from this virus. That alone demonstrates how and why racism is inherent to his failure. When we hold him to account for it, it isn’t falling into a trap. It is bringing to the forefront an uncomfortable reality that has been physical for some and theoretical to too many. It is confronting an inherently American evil that needs to die.

This is especially true in this instance, when people in this country and around the world are targeting those of Asian descent with increased violence and harassment. People have stigmatized Chinatowns in various cities. A teenager here in Los Angeles was assaulted at school and falsely accused of contracting the novel coronavirus. A Cleveland woman was denied an Airbnb rental because of “local health advisories.” Journalists have spoken up on Twitter about being accosted on the street or, in a notable instance, reportedly having the phrase “Kung Flu” said to her face by a White House staffer.

Trump, with all of his deliberate ignorance, will continue to deny that he has anything to do with it, despite what experts have claimed and his past actions have shown. But especially given the setting — a presidential task-force briefing that ostensibly gives facts to the public — why is Trump not challenged to say how calling it the “Chinese virus” helps save lives? We have seen a correlation between Trump’s racist rhetoric and actions, and the spike in terrorist violence committed by white supremacists. Why would this be any different? Why isn’t he held to account for engaging in similar behavior during this deadly crisis?

He is as fundamentally disgraceful in this respect as the U.S. senators who sold stock once they were briefed on the coronavirus. Rather than exploiting the market to profit off the coronavirus, which we should also know if Trump has done, the president exploits our divisions to benefit politically. Both actions are fireable offenses.

Conservatives have won a victory in the economy of ideas when we regard addressing and ameliorating racism, to say nothing of refusing to promote it, as somehow ancillary to a federal government’s priorities. Trump’s racism is not a sidebar. It is part of the main story, essential to his overall collapse. We fail when we opt to let him get away with it.