On November 9th, 1966, John Lennon walked into London’s Indica Gallery where he met a 33-year-old avant-garde artist named Yoko Ono. The Beatle, unenthused by concept art, climbed a ladder that was part of Ono’s installation piece. At the top of the ladder, the word “YES” appeared through a spyglass and, as Lennon later explained, he was deeply moved by the simple expression of acceptance.

Nearly 50 years later, Ono continues to proliferate optimism through her art and social activism. Photographs of the piece that inspired Lennon, “YES Painting, 1966” along with photographs of “Apple, 1966” and “War Is Over, 1969-1991” are included in the comprehensive new collection Yoko Ono Infinite Universe At Dawn, curated by Ono with Genesis Publications. Only 1,500 limited edition signed copies of the book will be released worldwide at roughly $517 (or £325).

Tuesday night at New York’s Paley Center, Ono sat down with Rolling Stone contributing editor Anthony DeCurtis for a lengthy discussion about her path as an avant-garde artist. Wearing a leather jacket and dark circular glasses, Ono spoke about her childhood in Tokyo — where she was trained as a classical pianist — to her involvement with New York’s Fluxus movement and John Cage. 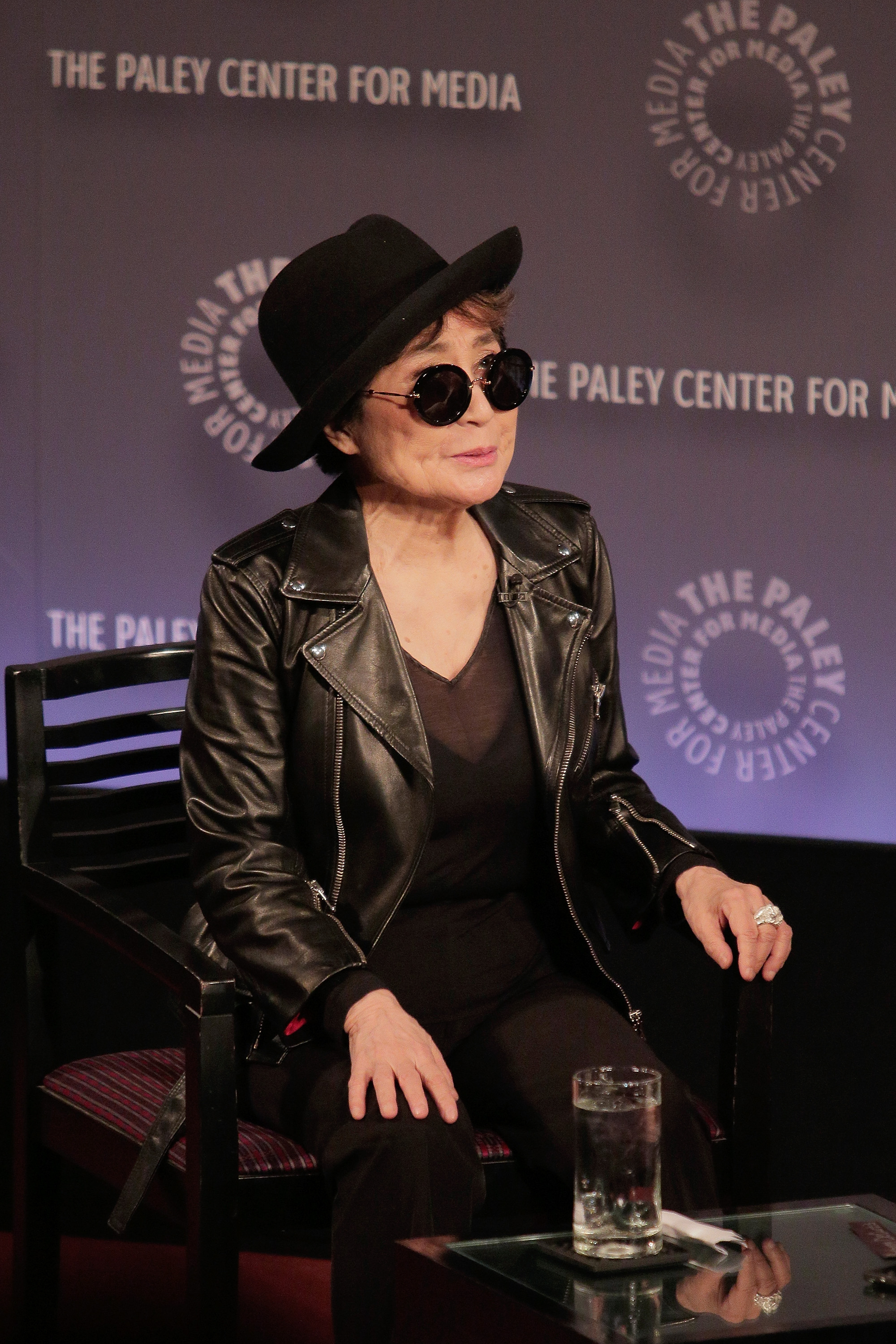 Ono said she rebelled against her parents’ classical interests and experimented with conceptual music as early as her teens. “I had a natural feeling for doing something that was new,” she said. However, when her family relocated to Japan’s countryside during WWII, Ono’s mother encouraged her to pour her hardships onto the page. It proved to be valuable training for Ono, who would later use her art as an instrument of social change.

A video montage highlighted the radicalness of Ono’s experimental film projects. The most striking was “Cut Piece, 1965,” featuring a vulnerable Ono sitting on a stage with her eyes fixed in the distance as individuals came and cut off a sliver of her clothing with a scissors until there was nothing left to cut. Ono only performed it wearing garments she actually loved. “Nuns understood it,” said Ono, “because they are used to giving.” “Cut Piece” is a hallmark of Ono’s fascination with communication, a theme she revisited in pieces such as “Bed Peace, 1969,” a clip of her infamous Bed-Ins for Peace with new husband John Lennon, and her insouciant “Bad Dancer” music video from Plastic Ono Band’s 2013 album Take Me to the Land of Hell.

While Ono admitted she used to struggle with interaction (“I was an artist that didn’t want anyone to touch or change my work”), her opinion softened the more she witnessed the power of engagement. “All of us have energy, but not all of us give it,” Ono said, adding with a credulous smile, “It’s easy to change the world.”

After eight decades, Ono’s projects take on a larger scope these days. Her 2007 memorial, Imagine Peace Tower, is a public art structure dedicated to John Lennon in Viday Island near Reykjavik, Iceland. Long ago, Ono had an idea for a building made of light. When she told Lennon about it, he asked her to build the light tower in his garden. She laughed at the ridiculous idea. Today, the installation is actualized. Fifteen searchlights are projected from a white stone monument, creating a tower of light, a symbol of modernity and enlightenment. At the base of the monument, the word “Imagine,” after Lennon’s emblematic song, is engraved in 24 languages. Ono said, “It just occurred to me that this is [Lennon’s] garden.”