“Love is in the air tonight!” shouted Karen O at the Yeah Yeah Yeahs’ New York homecoming show on Sunday night. She wasn’t kidding – the YYYs could inspire couples to make out even before they broke out of New York clubs with 2003’s “Maps.” But at Webster Hall in the East Village, the love was directed toward the stage, and Karen O gave the crowd plenty to look at.

Outfitted in a zebra cape, a banana-yellow glitter-studded shorts-suit, a welder’s mask (also glittery) saying “Yeah,” Seventies-era Miles Davis glasses (one lens in and one out), and a tousled head of semi-bleached hair with dark roots the size of a fist, she might have been the happiest person in a room full of folks out for a good time. (She also wore a miner’s flashlight headpiece early in the set, as if she were planning to join Orbital or something.) 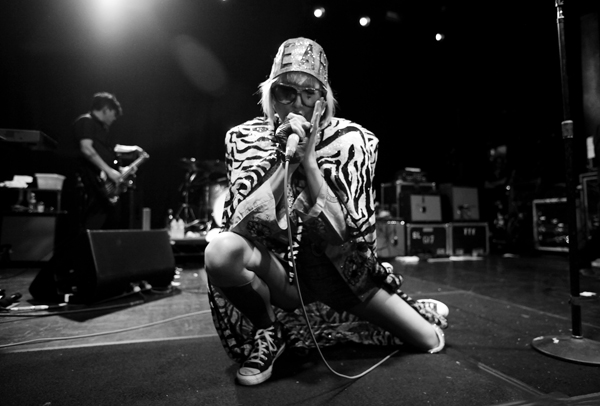 Expanded to a four-piece for their 14-song set (they played the two-song encore as a trio), the Yeah Yeah Yeahs – O, guitarist-keyboardist Nick Zinner, drummer Brian Chase and guest sideman-to-the-stars Dave Pajo (Slint, Zwan, countless others) – grew stronger as the set progressed. Or maybe they just grew more anthem-like. Fist-pumpers like “Gold Lion” and “Cheated Hearts,” from 2006’s Show Your Bones, were finished by the time the set was half-done; ditto “Black Tongue,” from 2003’s Fever to Tell, which elicited sing-alongs nearly as lusty as O’s own on the key lines, “Boy, you’re just a stupid bitch/And girl, you’re just a no-good dick.”

“Sacrilege,” with which the YYYs previewed the new Mosquito last month, came early in the sequence, right before “Cheated Hearts,” and as O swung her blue scarf overhead during the latter song, “Sacrilege” felt more like a set-up than an epic. There’s something kabuki-like about O’s stage moves; they’re very theatrical, but also giddy. She’s a fashion plate because she likes outrageous clothes, and can pull them off. But she’s a rocker because there’s no hauteur there at all. Or, as she put it with a laugh when she asked the band to begin “Wedding Song” over again after missing her cue, “So profesh.” 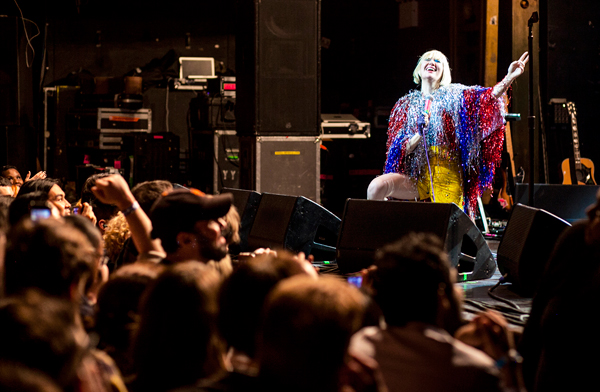 After that one, performed mostly under a bare spotlight, things revved up considerably. The crowd’s arms were up before the first drumbeat of “Zero,” from 2009’s It’s Blitz!; this time O put on a black leather jacket (with studded “KO” on the back). “I’m totally getting a contact high right now,” she said afterward. “I like it, I like it.”

Right after performing the new “Despair,” O pointed to the stage-left wall and noted, “I once saw Lux Interior climb up that wall. It was pretty amazing. I’m not going to do that tonight, though.” She had something better up her sleeve. After bouncing like a kid through “Heads Will Roll,” the main-set finale, the band returned, sans Pajo, for two more. “Maps,” dedicated to pretty much everyone the group knew (“Second cousins, third cousins”), was interrupted briefly with a round of “Happy Birthday” to a friend.

Then came “Date With the Night,” also from Fever to Tell – a fearsome stomp with O at her most genuinely unhinged. The best part came when the band stopped and froze, both O’s and Chase’s arms aloft for a good 20 seconds. Then Zinner revved up, Chase twirled his stick, and they came smashing back in. O slammed her mike to the floor like a lariat, repeatedly. It was show-stopping in every way possible.