Kanye West doesn’t believe in yesterday. Living through his records may be the closest thing our generation gets to experiencing the constant future-shock of the Beatles between Rubber Soul and Let It Be. Each of the six left-field knockout studio albums that band released from 1965 through 1970 seemed to tweak the world toward its psychedelic or surreal or shaggy image. Of course, after that, the Beatles called it quits. After Kanye’s sixth critically acclaimed game-changer, he only started getting a little help from Paul McCartney.

Kanye West’s six-album run between 2004’s The College Dropout and 2013’s Yeezus is hands down the greatest, most unstoppable streak of records in hip-hop history. And while great rapper streaks are not exactly unheard of (Bay Area ambassador E-40 is set to drop his 23rd excellent album any day now), there’s been absolutely nothing comparable to West’s level of daring, visibility and impact. That, sadly, looks like it’s coming to an end.

Part of what made the Kanye West solo albums great was how they cut a clear path through expectations — not only poppin’ wheelies on the zeitgeist but sailing clear over it dressed like Evel Knievel. Kanye West albums deliver the impossible: a cinematic banger about conflict diamonds, hipster concerns like French house or krautrockers Can turned into populist monsters, Young Jeezy getting a safe place to ponder his sodium intake, a nine-minute minimalist masterwork with a three-minute vocoder solo, avant-garde digital noiseniks like Arca and Gesaffelstein running rampant.

Every Kanye West album has felt like a bold stroke against everything, since he zigs when the world zags. His 2004 debut, The College Dropout, treated his insecurities like 50 Cent treated the size of his guns. In the middle of G-Unit’s chest-puffing machismo and T.I.’s tales of street hustles, West rapped about hating his job at the Gap, dropping out of college and feeling guilty about consumerism. With 2005’s Late Registration, he and Jon Brion opted for sweeping string arrangements in the age of minimalist crunk. 2007’s Graduation presaged our EDM technofuture years before DJ Snake and Lil Jon had everyone turned up. 2008’s 808s and Heartbreak took the then–increasingly unfashionable Auto-Tune technology and used it to change what a rapper does — beyond T-Pain’s pop triumph, West used the simplistic and melodic gurgle to mine emotional depths. 2010’s My Beautiful Dark Twisted Fantasy was a Pink Floyd–sized, King Crimson–sampling 68-minute prog-rap behemoth in the age of shrinking budgets. 2013’s Yeezus was basically a noise record scrawled in political punk freehand.

What is even left for Kanye West to do? Twisted Fantasy is already rap’s baroque St. Pepper’s, 808s its stripped-down Let It Be. It seemed for a minute like West had discovered a new path with a pair of Paul McCartney collaborations, “Only One” and the Rihanna single “FourFiveSeconds.” Both were completely beatless — has there ever been a hit rap song with no beat? Mixing plainspoken hip-hop lyrics with electronic textures and classic singer-songwriter balladry, they were basically Dylanesque folk confessionals performed by some of the most famous people on Earth. In hip-hop’s 43rd year, the very idea of “rap” could have been disassembled completely by an album of robo-Mumford tunes, a Rubin-esque reducing of “rap” to mean nothing but stark honesty and the occasional rhyme. Ultimately this phase of Kanye West turned out to be more detour than blueprint.

For the first time ever, West seems a little more concerned with following than leading. Loose track “Facts” was an attempt to follow the success of the Future and Drake mixtape by releasing his own version of their viral hit “Jumpman.” “All Day” was yet another one of West’s attempts to liberate Chicago’s teenager-driven drill music from lo-fi YouTubes and put it in arenas. Even the album title, Waves, implies the need to borrow existing slang: “Wavy” is imprisoned rapper Max B’s way of saying something was progressive. Borrowing it is not especially wavy. 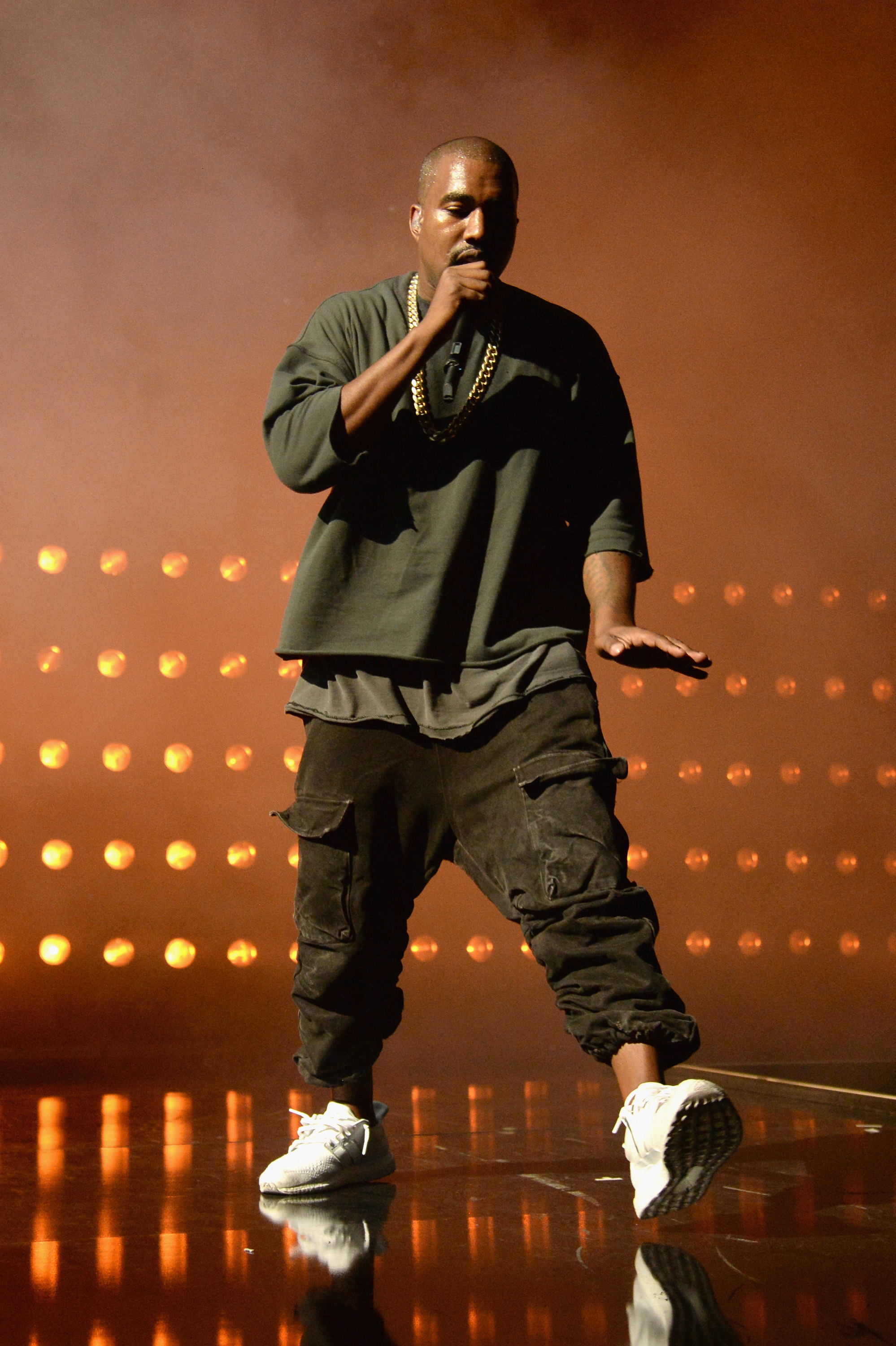 You can’t put blame on the man, who’s already notched nearly 15 years as one of pop’s most brilliant auteurs. Is there even anything for Kanye to rebel against? Streaming services have democratized the landscape, making the umbrella of successful rap music wider than it’s been since the golden era. We have complex lyrical knots from Kendrick Lamar and Nicki Minaj and simple shouts from Chief Keef and Lil Durk. We have party music from Rae Sremmurd, fight music from Meek Mill, depression music from Earl Sweatshirt and joy music from Migos. We have a Broadway musical that’s rapped. We have whatever spaceship Kid Cudi is piloting this year. And as for the rest of rap, well, it’s all lanes that West himself has opened. The confessional post-Dropout diaristic types (J. Cole, Big Sean, Lupe Fiasco); the post-808s emo-pop crooners (Future, Drake, Fetty Wap); the post–Twisted Fantasy high-concept fashion misfits (Travi$ Scott). You diss Drake, you diss yourself.

The existing Waves tracks aren’t even slouches — in fact all four songs that are out there, “Wolves,” “Fade,” “Real Friends” and “No More Parties in L.A.” are great. They’re perfectly awesome Kanye West songs: warm, weird, honest, an amalgam of the ideas spread across his last three records. The only problem is, he’s not the only one making records like that anymore; they’re filling a space that already exists. Kanye goes ham for an obscene amount of bars on “No More Parties in L.A.” — maybe one of his most technically advanced verses in years. “My psychiatrist got kids that I inspired” is one of the year’s greatest humblebrags. But if you want to hear a great rapper over an old Madlib beat, there’s about two decades worth of stuff you can catch up on. “Real Friends” is a mature confessional about maintaining relationships — no more toasting to douchebags, let’s reform them. But the underwater feel is like practically every record of the post-Weeknd era. “Wolves” is beautifully minimalist and dreary and desperate, but Travi$ Scott is out here eating Kanye’s lunch by doing a catchier, less arch version of the same.

Kanye is doing a version of all the Kanyes from the last eight years, but so is most of rap. Without a script-flipping sound, Waves is going to be just another great rap album lost in a world where great rap albums get released for free on Livemixtapes.com every week. Without something to change our way of thinking, Waves will be the Rolling Stones’ Goat’s Head Soup, or Prince’s Diamonds and Pearls or Talking Heads’ Little Creatures — a completely serviceable, mostly excellent record that wouldn’t be anyone’s first pick for the oral history.

Then again, if Waves is amazing, it wouldn’t exactly be the first time Kanye West shattered someone’s expectations.