Will Ads or Music Fans Pay for Streaming in 2019? - Rolling Stone
×

When Spotify went public last year, its biggest hurdle was convincing investors that its free tier — supported by advertisements, delivering music to millions at no cost and draining heaps of money from the Swedish music-streaming service — was crucial to its business. Free users, Spotify said to both Wall Street and the music industry, have a very good chance of converting people into paying subscribers on the premium tier, where their monthly fees quickly “make up” the money from past freeloading.

It’s a promise that everyone has believed in so far, largely because they’ve had no real other choice. But as music-streaming services become cemented as the dominant way people listen to music – especially among the key demographics of teens and young adults – the music industry is antsy for proof that the majority of listeners will bite onto the much more profitable subscription tier and not stream for free forever.

A look at music listening patterns in 2018 would suggest that the industry’s hopes are coming true. According to year-end figures from data firm BuzzAngle, which tracks music consumption, the growth in on-demand audio streams in 2017 — and it was growth indeed, with the number of individual audio streams soaring from 376.9 billion in 2017 to a record 534.6 billion — was largely driven by paid streaming. Comparing the last quarter of 2017 and the last quarter of 2018, subscription streams rose 50.5 percent while ad-supported streams increased 18.2 percent. And that’s only growth: In pure numbers, BuzzAngle analysts say that in the last quarter of 2018, 85 percent of all audio streams were also subscription-based. 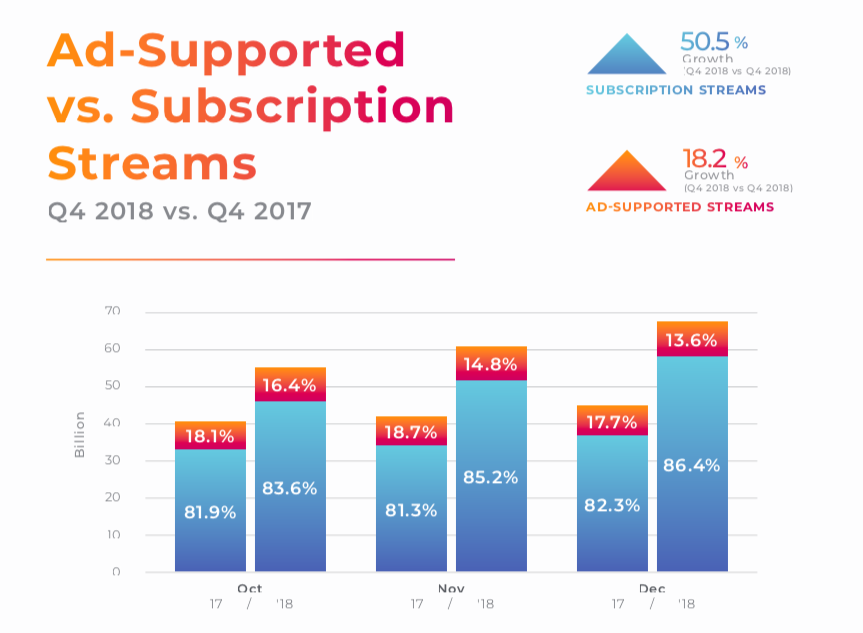 There are caveats to this glimmering, utopian vision of music fans increasingly paying for music. Those figures above don’t include data from video streams — i.e. the dizzying amount of free music streaming happening on YouTube every day, which some industry executives deem the elephant in the room that is music’s profitable future. While Spotify is the biggest music-streaming service, with around 190 million users, half of whom are on the free tier, YouTube trounces that figure with a monthly user base of about 1.8 billion; the free video-streaming giant’s presence in the space muddies the future of the subscription music model.

But elsewhere in the report is a separate point of optimism for the music business: The number of unique audio tracks that were streamed in 2018 totaled 9.2 percent more than in the previous year (about a difference of 3 million songs), which BuzzAngle CEO Jim Lidestri calls a “terrific sign for the industry.” Such a figure suggests either that listeners are using streaming to explore more new music than before, more artists are making more music or a combination of the two. In any case, for an industry still trudging out of two decades of decline, the near future at least looks solid.

Note: Penske Media has a controlling share in BuzzAngle.