Wilco frontman Jeff Tweedy will chronicle his early life and creative evolution in his upcoming book Let’s Go (So We Can Get Back): A Memoir of Recording and Discording With Wilco, Etc., out November 13th via Penguin. (The title is out November 22nd via Faber & Faber in the U.K.)

Throughout the book, the singer-songwriter “takes fans into his songwriting process, from early days with Uncle Tupelo to writing Summerteeth, Yankee Hotel Foxtrot, A Ghost Is Born, and beyond,” according to a press release. The description continues, “Jeff talks about his childhood in Belleville, Illinois; takes you to the St. Louis record store, rock clubs and live music circuit he grew up in; and shows you around the Chicago scene that brought everything together. He’ll also talk in-depth about his collaborators in Uncle Tupelo, Wilco and more.” He also writes about his parents, wife Sue and sons, Spencer and Sam. 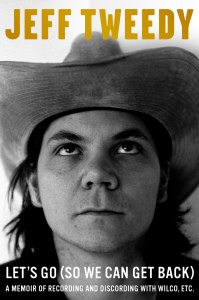 Tweedy teased the project in 2015, calling the autobiography “funny, disarming and honest.” He added in a statement, “I have stories to tell, and I’d like for this book to be a combination of those stories about my experiences, and maybe a window into one person’s creative process, as well as some of what I’ve seen working with other artists in my current and former bands, in the studio, on the road, in my basement with my sons and more.”

The musician recently announced a solo tour that launches September 19th in Milwaukee, Wisconsin and wraps October 8th in Los Angeles, California. In 2017, he released the solo LP Together at Last, and collaborated with Mavis Staples on her album You Are Not Alone. Wilco issued their 10th record, Schmilco, the previous year.