Rain had soaked thousands of Wilco fans by the time the band returned for their second encore on Monday at Brooklyn’s Prospect Park, but Jeff Tweedy wasn’t going anywhere. “Let’s see if I can remember this one,” he said with a grin, picking the opening chords to “Red-Eyed and Blue,” the lovesick ballad off 1996’s Being There. “It’s all coming back to me now.” The song segued into the stomping barroom swagger of that LP’s “I Got You” and a highly-charged “Outtasite,” guitarist Pat Sansone windmilling, drummer Glenn Kotche standing up in an arena-rock pose and Tweedy extending his arms howling, “Look out, here I come again and I’m bringing my friends!”

Wilco were at the height of their live powers during their two-night stand at the gorgeous Prospect Park bandshell – a benefit for Celebrate Brooklyn’s free summer concert series – playing a total of 45 songs over both nights. Perhaps due to the rain and lightning, the first night possessed more dramatic edge, full of intense, violent jams and precise dynamics. After kicking off breezily with new cut “Dawned on Me,” they got serious by second number “War on War,” which began acoustically, but devolved into a haze of feedback, whirring keys and Nels Cline furiously scratching a pipe-like object across his guitar neck. You can hear it all on Yankee Hotel Foxtrot, but it’s still staggering to see live. Cline’s genius was on full display all night, bringing his Jaguar-stabbing peaks to “Impossible Germany,” “Shot in the Arm” and  “Muzzle of Bees,” which eased from hushed meditation into an extreme psychedelic freakout. They were at their weirdest during the new “Art of Almost,” with Tweedy grooving center stage like Thom Yorke over frantic rhythms and knob-twisting manipulated guitars and keys. As rain poured, lightning flashed several times during the epic jam, and the crowd cheered. “Is it raining?” Tweedy said. “I’m jealous.” 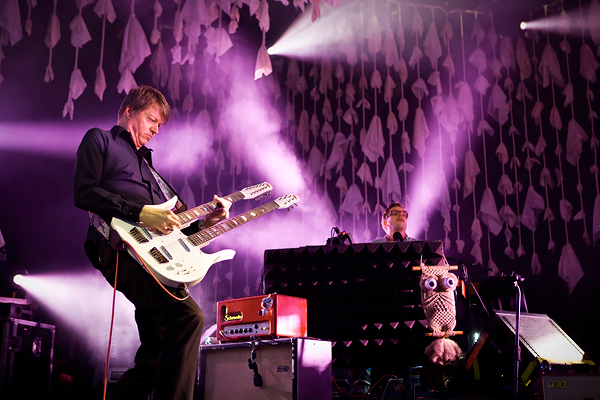 Night Two was more of a perfect summer night, the setlist leaning more on acoustic, sensitive songs with fewer peaks. Still, fans who returned were rewarded with plenty of great moments; a fully animated Tweedy howled “Hummingbird” with no instrument, taking his brimmed hat off for emphasis, and the band blazed through the funked-out distorted boogie of “I’m the Man Who Loves You,” an angry, pummelling “Nothing’severgonnastandinmyway” and the irresistible garage jangle of 1995’s “I Must Be High.” During the encore, the band nailed a mindblowing, shattering “Via Chicago” as stage lights flashed furiously. Watching the crowd sing along to the scorned Summerteeth ballad made it clear how far Tweedy has come since he wrote it. In the Nineties, he went through ever-changing Wilco lineups and struggled through addiction, depression and a panic disorder. Now, Tweedy seems far more content; he’s spoken in interviews about becoming addicted to running, and he just started a band with his teenage sons called the Raccoonists. And with an ace solid lineup, Wilco are a more finely tuned live machine than they ever have been. “Oh my God, the big rock & roll clap thing!” Tweedy said as the crowd participated during “Monday.” “I’m gonna cry!” After more hand-clapping and finger-snapping during “Kingpin,” Tweedy smirked. “Thank you for indulging my rock & roll fantasies,” he said. 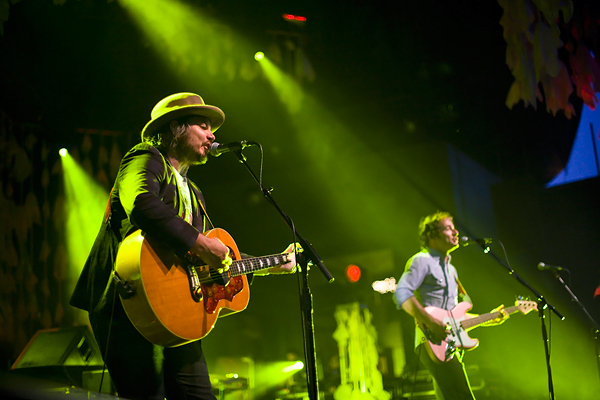