Although festivals necessarily operate according to a formula, Wilco’s are never formulaic. Back to anchor their own Solid Sound Festival for the third time at the Massachusetts Museum of Contemporary Art in the Berkshires town of North Adams, the band played a pair of headlining sets Friday and Saturday that were as different as could be: Only one of them featured songs by Wilco.

The Chicago rockers turned Friday night’s performance into an all-request show that was full of surprises. On Saturday Wilco stuck to their own catalog, including a handful of deep cuts that don’t pop up too often in the band’s set lists. In between, they hosted performances by acts including Neko Case, Low, Yo La Tengo and Eighties indie-rock band the Dream Syndicate’s first U.S. show since 1988, along with Foxygen, who ended up with a surprise of their own. Yesterday’s lineup to close Solid Sound featured Medeski Martin and Wood, as well as performances from Brazil’s Os Mutantes and various Wilco offshoots.

That was certainly the case Friday. After a quick opening set from Austin rockers White Denim on one of two secondary stages and a funky throw-down from Dallas gospel band the Relatives on the main stage, Wilco came on as the sun sank behind them to mine songs from 76 pages worth of requests that fans submitted online. MC’d by Daily Show comic John Hodgman, Tweedy and Co. took on tunes by the Beatles, Bob Dylan and the Rolling Stones, indie-rock staples by Big Star (“In the Street” and “Thank You Friends”), Television (“Marquee Moon,” a clear audience favorite) and Pavement (“Cut Your Hair”), and unexpected offerings by Abba and Daft Punk. (Listen below.)

They had help here and there from other musicians on the bill, and one who wasn’t: Replacements bassist Tommy Stinson joined Wilco on guitar to perform an appropriately chaotic version of “Color Me Impressed,” from the ‘Mats’ 1983 LP Hootenanny. Jess Wolfe and Holly Laessig from the Brooklyn band Lucius also accompanied Wilco, adding backing vocals on the Kinks’ “Waterloo Sunset” and the Band’s “The Weight” and taking the lead on Abba’s “Waterloo.”

Occasionally Hodgman would wander out, fire up a bingo blower machine on the corner of the stage and select a ball marked with a number that allegedly corresponded to an entry on a huge sheaf of telex paper stacked nearby. “That’s my favorite song,” he invariably said, resulting in the Grateful Dead’s “Ripple,” Yo La Tengo’s “Tom Courtenay” (with an assist from Yo La Tengo) and the sole Wilco number, “Kingpin.” A stump-the-band portion of the show featuring in-person requests from audience members looked like a bust until someone asked for Daft Punk, and Wilco obliged by rolling through “Get Lucky,” complete with sexy dance moves by a tambourine-shaking member of the band’s crew in tight jeans.

“It was out of our comfort zone, obviously, so we thought if we couldn’t play it, we’d play their version over the PA and put on motorcycle helmets,” Tweedy told Rolling Stone. “But I didn’t want people to think we were making fun of it, because that wasn’t our intention.” 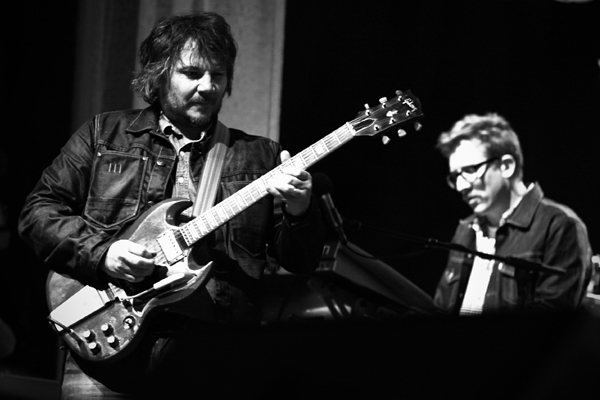 Stinson wasn’t the only unexpected guest at Solid Sound. On Saturday, Dinosaur Jr. guitarist J Mascis sat in with Mark Mulcahy during the latter’s noontime performance, and Beth Orton – whose husband, Sam Amidon, was on the bill – played a surprise pop-up set inside one of the Mass MoCA galleries.

Also Saturday, Lucius presented a set of their own tightly harmonized songs as part of a lineup that included a mellow, meandering performance from Yo La Tengo, a spellbinding turn by Low on taut, often spare songs that seemed to mask a turbulence roiling just below the surface, and the amped-up antics of Foxygen. The buzzed-about young band has proven surprisingly fragile, canceling a European tour earlier this year to preserve the “creative health” of the group, but at Mass MoCA they surged through a volatile, energetic set that included singer Sam France climbing the scaffolding supporting the stage, before a member of the festival crew pulled him down brusquely enough to send him sprawling.

It wasn’t the only incident involving Foxygen: the band was later ejected from the festival after the group’s tambourine player was involved in a drunken altercation. The North Adams police said a member of the band was briefly detained but not charged. “They were awesome,” Tweedy joked onstage later in the day. “They were a little too awesome, I think.”

Wilco’s Saturday set roamed among the band’s albums, with a particular emphasis on their 1999 LP Summerteeth, along with a handful of songs from all of their other albums except 2004’s A Ghost Is Born.

The band tinkered occasionally with the arrangements, undercutting the mournful melody on “Sunken Treasure” with extra turbulence, unleashing savage bursts of noise that surged up over Tweedy’s vocals and then receded on “Via Chicago” and spotlighting Mikael Jorgensen for an organ breakdown on “Can’t Stand It.”

Wilco brought out guests, including Wolfe and Laessig and Yo La Tengo’s Georgia Hubley, to help on “California Stars” during the encore, which also included the rarity “Just a Kid,” written by Tweedy and his son Spencer for the 2004 SpongeBob SquarePants movie.

Spencer Tweedy got his own chance to perform yesterday when his band, the Blisters, opened the final day of Solid Sound with a raucous 45-minute set of songs that closed with the joyfully snotty “Rock N Roll Intervention.”

Yesterday featured a more experimental lineup. Wilco’s Nels Cline and Julian Lage performed an hour’s worth of improvisational guitar duets, while Wilco drummer Glenn Kotche’s side project On Fillmore accompanied a live version of the NPR program Radiolab. It wasn’t all improvisational: Wilco’s John Stirratt and Pat Sansone performed a set of low-key, Seventies-style alt-country songs as the Autumn Defense, and later in the day guitarists Marc Ribot and David Hidalgo played an acoustic set of dusty ballads in English and Spanish they called “Border Music.”

After a high-energy set from Os Mutantes, Medeski Martin and Wood closed the festival with a muscular performance featuring a succession of guest spots from Hidalgo, Ribot and Cline, who looked rapturously happy as he dialed in sinewy, spiraling guitar lines. Tweedy joined Medeski Martin and Wood toward the end for a version of Wilco’s “Hate It Here,” which helped bring the third Solid Sound Festival to a close.

“This was the biggest and best one yet,” Tweedy said.