When Michael Gira moved to New York, he was sick of L.A. punk. He had lived through the surge of ’77, but by the end of the decade, he says “its initial liberating violence was mitigated by the kind of fashion aspect and the way people would play the same three chords in slightly different variations.” So he moved to New York City and brought together a group of like-minded high-volume pugilists and named it Swans.

Although the band’s initial release, 1982’s Swans EP, built off of the city’s dying no-wave scene, the ensemble came into its own with its debut full-length, Filth, the following year. Full of lumbering rhythms created by two bassists, two drummers, one guitar, a whipped metal table and some suffocating tape loops, the record is primal art rock at its most vitriolic, anticipating industrial, sludge and noise-rock in one fell thump. More threatening, Gira intermittently snarls imperatives about power – “Flex your muscles!” “Take control and keep it!” “Don’t talk until you’re spoken to!” – in a way that made Henry Rollins sound like Olivia Newton-John at the time, as the band dismantled rock to its most threadbare essentials.

Swans Finish Next Two-Hour Epic, 'To Be Kind,' With St. Vincent

Now Gira is issuing a deluxe version of Filth, a definitive three-CD account of Swans at their most bloodthirsty. In addition to the original album, it contains live recordings from CBGB and Berlin, studio outtakes and the original Swans EP. It’s the first in a series of reissues Gira is releasing (next up will be White Light From the Mouth of Infinity and Love of Life), while he and the current Swans lineup ramps up to recording a new album in September.

Gira recently spoke to Rolling Stone on a tour stop in Belgium, in the midst of a European tour where the band is test-driving new material, to reminisce on Swans’ filthy origins.

What was your intention with Swans originally?
It was just people strangling sound out of their instruments without any kind of explicit musical skills, per se.

You complain about punk bands doing three-chord riffs, but a lot of the songs on Filth are just one lunging chord.
Well, it seemed like cheating to go on to a second chord, so we didn’t. We came upon that sound just by playing. I had started playing bass, and I was dissatisfied with playing bass lines pretty quickly and I started making these chords that I would slam, and they just make these chunks of sound. We made rhythms around that, and we had tape loops that we would use that would come in and out with the use of a volume pedal. So we didn’t play to a rhythm: it was kind of a roar that would come in by pushing the volume pedal down in time with the music.

What was life like for you around the time of Filth?
Really hard. I didn’t have any money. I was doing construction work of the lower order, like demolition and some sheet-rocking and some plastering, stuccoing, any kind of grunt work. But I worked really hard, so I made good money. But you’d make some money and then it’d be gone and you’d have to find more work. It was all just kind of difficult. New York was replete with interesting music and art at the time, so that was good, but the city itself was in the throes of decay. The neighborhood where I lived – I lived on 6th Street and Avenue B – was mostly abandoned buildings, gunfire every night; machine-gun fire, in fact. Some buildings were just piles of rubble. Other buildings taken over by dope dealers and were mainly places to sell heroin. Lots of crime. It was a much different city than what it is now.

The art must have been good enough to keep you there.
It was invigorating. There was really nothing left for me in L.A. at the time. If you wanted to do something exceptional at the time, New York was really the place to do it.

Filth is the first record to feature Norman Westberg on guitar. What did he bring to the band?
One of my few idols was Iggy Pop and the Stooges, and Norman had this kind of a vast, sustaining chordal sound that I associate, for some reason, with Detroit. He had these really big sheets of sound. He tethered it more to the world of rock, which I liked.

Why were Swans so primal sonically then?
I suppose it just felt good.

Why did Swans have two bassists and two drummers?
I think it just gave more visceral power to the sound. It was very physical and, as such, it opened up other channels psychically because it was so overwhelming.

And when Roli Mosimann wasn’t playing drums, he whipped a metal table with a metal strap. Where does one get such things?
A metal shop in SoHo, which was then a quasi-industrial area. It was a place that made metal shelving, and I would go down there and buy 10 or so shelves and a bunch of the strappings that they used to apply the shelves together and then put a couple of socks on the end of the strap and wrapped gaffer tape around it, so it became some kind of instrument. It was a sharp sound that particularly mixed really well with the snare.

What were on your sound loops?
Some of the tapes were of synthesizers; one was a kitten slowed down, like, four times or something, just different kinds of chunks of sound. It was linked to a rather huge bass amp, so it was really physical. The whole thing was about physicality at the time.

Why?
‘Cause it felt good!

How hard was it to find a studio engineer that understood that?
I’m not sure the engineer did understand it. We recorded that album at Vanguard Studios, which is a very famous New York studio where they recorded orchestras and music from folk to R&B. We recorded in a huge room. The only memories I have is being frantic to get it done ’cause we had no budget whatsoever. I guess the whole thing was a week.

Were you satisfied with how it came out on vinyl?
I suppose at the time. I mean, I’m never really satisfied. I’m always more interested in what’s coming next.

Filth originally came out on Glenn Branca’s Neutral label. Was that a big deal for you?
Sure. I had tremendous admiration for Glenn. I don’t recall how that connection was made actually. It might have been through Sonic Youth. That was one of those random things that happen that turn out to change your life. That was a great experience, and I played in one of his early symphonies, and that was truly inspirational. Not in the sense of wanting to take influence from his music per se, like Sonic Youth did, but more in the sense of reaching for epiphanies through sound. I had really no interest in finding out how he did that or trying to emulate it, but I just wanted to be able to reach that kind of highest moment, these crescendos. It was like a paradigm, an example of what was possible. It was absolutely mind-blowing, psychedelic in the true sense.

What did your parents think of early Swans?
I doubt that they were even able to listen to it. But my father started to believe that I was doing something of some value when I got reviewed in The New York Times for the first time around ’83. That was impressive to him. So then it was OK. If they did listen to it, they’d just say “Well, that’s something for you kids.”

Why are so many songs on Filth about power?
I was preoccupied very much with how the work that one does constitutes usually at least a third if not more of your life and what a tragedy it is to spend your life doing work which doesn’t fulfill you or is debasing or in some way that you’re controlled by some kind of corporate or other entity. And I was also very preoccupied with media control of people’s identities and thoughts, which has gotten even worse since then. I was pretty obsessed with those subjects so they turned up on the records.

And then on “Freak,” you sing, “You’re gonna murder somebody weak.”
Yeah, well, in my post-adolescent fury, I reduced everything to its most basic components. 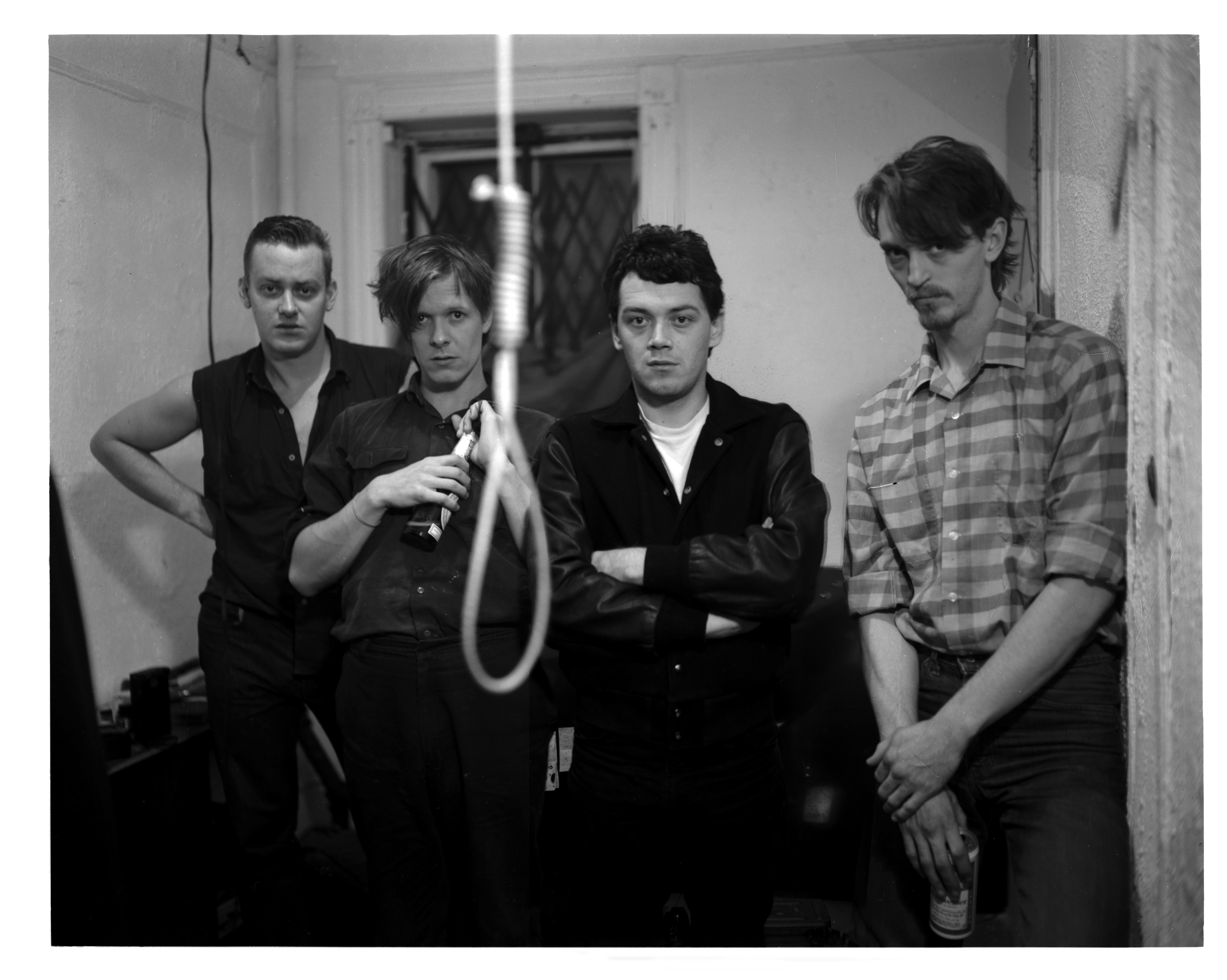 What was the inspiration behind “Blackout”?
I don’t remember. I don’t think it specifically had to do with drinking. I think maybe it had to do more with trying to reach a state of mind that was completely empty – something I’m still striving for.

Listening to the lyrics and feelings about power, would you consider yourself a masochist at that time?
[Laughs] I’m not gonna talk about my sex life, that’s for sure. I’m not that person anymore and that’s a long time ago but I think it just had to do with trying to erase yourself in any way possible and the sound was one way of doing that. It was so big you really lost yourself in it. It was very intense.

Why did you want to lose yourself?
I think that’s a valid religious aspiration personally.

The reason I ask about masochism is I read you once licked part of CBGB?
It was the floor in front of the audience.

Why on earth?
I just found total abjection to be for some reason desirable at the time. I thought it was my job as a performer to be as abject as possible, I suppose.

That’s certainly Iggy Pop–like.
Oh sure, him and Alan Vega. They’re big heroes of mine.

“I regret playing CBGBs barefooted on a regular basis and walking down to take a piss down there.”

What do you regret from that time?
Oh, just about everything. You name it. More than licking the floor, I regret playing CBGBs barefooted on a regular basis and walking down to take a piss down there. That was a pretty suicidal venture.

How much of a role did drugs play in Swans’ early days?
None. Any role they played was negative and expunged very early on. Alcohol might be a different matter, but I was a construction worker, so I drank beer after work. Put it that way [laughs]. You just wash down the dust.

How often did the volume become too much for you at those shows?
Quite often. But you just work through it. It’s not meant to be an aggression towards people or any kind of silly macho statement. Some of the guitar sounds wouldn’t exist unless it was heavily amplified. You can almost see the sustain hanging in the air, and you can feel it with your body as well. What I live for is when everything reaches that state. It’s like being right inside a symphony that’s kind of lifting you up to. It’s addictive.

A lot of the press in the Eighties described you as an angry young man. Is that accurate?
Yeah. But I don’t know what all the bluster was about now. I guess it’s just wanting to charge through the wall of perception and find something new. When you’re young, you’re just kind of beautifully violent. A lot of great art, literature and music is made by extreme young people and I think that’s a good quality. I don’t possess that quality anymore, but certainly then I felt like I could do anything.