Bangerz is the perfect name for Miley Cyrus’s fourth album due out on Oct. 8. The 13-song record (16 on the deluxe version) is packed tight with hit records.

Yes, the public is tired of Miley’s pathetic attempts to receive attention by any means necessary whether twerking, swearing, fondling dwarves or wearing revealing outfits, but the former child star has a secret weapon – talent.

Miley can sing and is wildly creative. Her obnoxious outbursts paired with production genius from the likes of Mike WiLL Made It, Pharrell Williams and will.i.am have created one of the most addicting, crass pop records that is inarguably the year’s guilty pleasure.

She’s taken leads from the greatest pop artists of the last 30 years and makes them her own, a hard to accomplish feat. 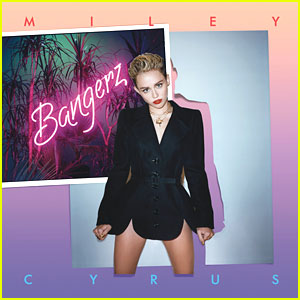 “Adore You” – Miley opens the album with sensual adlibs on this soulful pop ballad wit punchy violins, soft pianos, warm base grooves and a bit of layered doo-wop backing vocals. She applies a country styling on her vocals. It’s possibly her way of reminding listeners that she really can sing.

“We Can’t Stop” – Miley rushes to give fans the party they came to expect with her hit “We Can’t Stop.” It’s easier to appreciate the song’s slow boom and poignant pianos against her nasal Auto-Tuned pitch without the distraction of her wild twerk-fueld stage shows.

“SMS (Bangerz)” – Even aside from “SMS (Bangerz)”‘s Britney Spears guest feature, this song is the perfect dance follow up to “We Can’t Stop.” The hard, edge, driving beat lives up to the title as Miley trades singing and rapping in a style reminiscent of 1980’s rap hits, Salt N Pepa’s “Push It” and L’Trimm’s “Cars That Go Boom.”

“4×4” – Considering Miley’s country lineage, it makes sense that “Bangerz” would showcase some of those influences. But this song takes a surprising, unique foot-stomping approach, reminiscent of the style of KT Tunstall. She mixes her square dance-esque singing with a bit of rap and a fitting verse from “Country Grammar” rapper Nelly.

“My Darlin'” – It would take Ben E. King several listens to “My Darlin'” to recognize that his song “Stand By Me” has been incorporated into this spacey, Auto-Tune midtempo collaboration with Future. It’s so different than anything on the radio that it could easily be a surprise hit.

“Wrecking Ball” – Miley really didn’t need to go on a nude wrecking ball joy ride to take this power ballad to No. 1. It’s a solid, compassionate song that vacillates between soft, pacing vocals and guttural emotions.

“Love Money Party” – Miley tries again her fast-paced square dance raps over a hokey, booming track fit for a sequel to Fergie’s solo debut Glamorous. She offers a very simple explanation of her philosophies on love, money and partying: “Party ain’t nothing but a party when you party everyday it ain’t nothing but a party.” As on the preceding track, she fluctuates between rapping and singing to compliment the beat shifts. Big Sean offers one of his usual show-stealing verses.

“Drive” – Miley takes an angrier stance on heartbreak on “Drive,” another kick drum heavy track guided by EDM synthesizers. She sings, “If you done with it then why’d you say forever for?”

“FU” – While I appreciate the experimentation on the album, this is the first failed attempt. “FU” is a pop opera with a theatrical delivery and a dramatic production to match. Unfortunately, French Montana is of no help here, only makes the song that much more awkward.

“Do My Thang” – In case anyone missed the memo, Miley declares her determination to maintain her independence and she does so with such attitude. After adamantly proclaiming that she’s a southern belle, she launches classy expletive-filled raps over EDM handclaps, doubled drumbeats and buzzing sound effects.

“Maybe You’re Right” – Aside from being an unsuccessful attempt to capture the appeal of one of Katy Perry’s triumphant mid tempo ballads, it does evoke some empathy for her heartache.

“Someone Else” – Finally, Miley gets to the heart of her angst on the last song on the regular version of the album. Instead of spewing bad girl sass, here she weeps about the guy who “left with her heart.” She says it’s the reason why she “turned into someone else.” It’s another booming, EDM track.

“Rooting For My Baby” – It’s clear why “Rooting” is a bonus track on the deluxe version of the album. Sonically, it doesn’t fit the original, more hip-hop fused collection of songs. “Rooting” is a slightly lazy, fun pop rock track in the vein of Sheryl Crow. It’s definitely one of the cooler stylings on the album.

“On My Own” – This could be considered Miley’s tribute to the soul pop records of the 1980s. Michael Jackson influences can be heard in the aggressive, chanted lyrics. The sharp, funky electric guitars scream Prince. There’s even sexy panting straight from the Vanity 6 songbook. They even work in some of Rick James “Give It To Me Baby” bass. It’s possibly the best song on the album. The energy is so consuming its hard to focus on the lyrics.

“Hands In The Air” – Filler track. This bouncy, electronic song sounds like something that would better serve a video game soundtrack. It does boast a big, moving chorus, and a good rap verse from Ludacris, but its hardly memorable following so many other standout offerings.