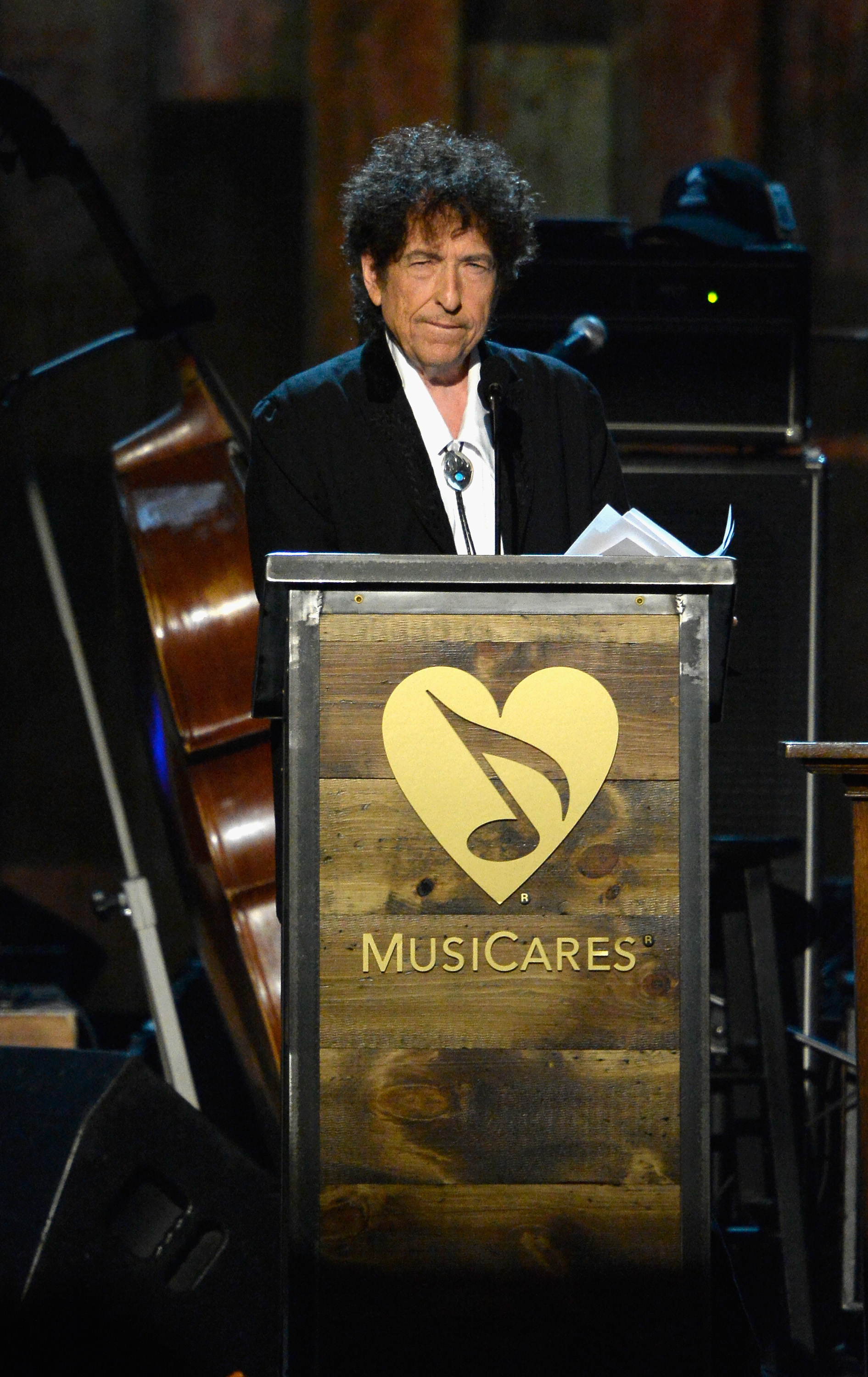 For someone not known for public pronouncements, it turns out Bob Dylan gives pretty good speech. During his acceptance comments as 2015 MusiCares Person of the Year on February 6th, Dylan didn’t simply thank those who played vital roles in his career. In a more than 30-minute talk, Dylan spoke like he never had before about songs and songwriting as well as his inspirations and friends who inspired and championed his work. He also spent a fair amount of time talking about the people who didn’t believe in him. The speech quickly become among the most talked-about acceptance speeches of all time in any genre. Having said that, even the most hardcore Dylanologists had to look up a couple of Dylan’s references. Here’s a helpful explainer of some of the speech’s most important passages.

“I know I should mention John Hammond, the great talent scout, who way back when brought me to Columbia Records. He signed me to that label when I was nobody. . .The last person he discovered before me was Aretha Franklin. . .”

It’s appropriate that, when it came to diving into his career, Dylan first thanked Hammond, the formidable A&R man who worked at Columbia Records, discovered Billie Holliday and Count Basie, and did indeed sign Franklin in 1960, a year before Dylan’s five-year contract was inked. Dylan was initially called “Hammond’s Folly” around the offices of Columbia, but Hammond and Dylan both proved them wrong.

Dylan is, of course, referring to their well-known covers of, respectively, “Mr. Tambourine Man,” “It Ain’t Me, Babe” and “All I Really Want to Do” (the last actually credited to Cher solo but produced by Sonny Bono). (The Byrds went on to record many other Dylan songs, too.) Dylan isn’t always effusive about cover versions of his songs: Last fall, Manfred Mann and the Byrds’ Roger McGuinn both told RS that they never received any feedback from Dylan after they cut songs from The Basement Tapes. So it was revealing when Dylan also lauded Peter, Paul & Mary’s rendition of “Blowin’ in the Wind: “Not the way I would have done it — they straightened it out. But since then, hundreds of people have recorded it and I don’t think that would have happened if it wasn’t for them.” Dylan clearly knows the value, artistic and otherwise, of a good cover.

“Nina Simone. I used to cross paths with her in New York City in the Village Gate nightclub. . .She recorded some of my songs that she learned directly from me, sitting in a dressing room.”

Simone, pop’s original fiery, uncompromising diva, isn’t the first person one thinks of when it comes to Dylan remakes, so it was pleasantly surprising that Dylan acknowledged her. Once Simone (subject of an upcoming Netflix doc that premiered at Sundance) began moving away from pre-rock standards and into contemporary material in the mid to late Sixties, Dylan was on her to-cover list. Her 1969 album To Love Somebody included her renditions of “Just Like Tom Thumb’s Blues,” “I Shall Be Released,” and “The Times They Are A-Changin.'” Two years later she cut “Just Like a Woman.” With her poised but earthy phrasing, Simone made each version her own, particularly the gospel-steeped take on “I Shall Be Released.” Later in the speech, Dylan said he might record “Oh, Lord, Please Don’t Let Me Be Misunderstood” — by which he probably means “Don’t Let Me Be Misunderstood,” recorded by the Animals, Elvis Costello, and others but also very much associated with Simone. 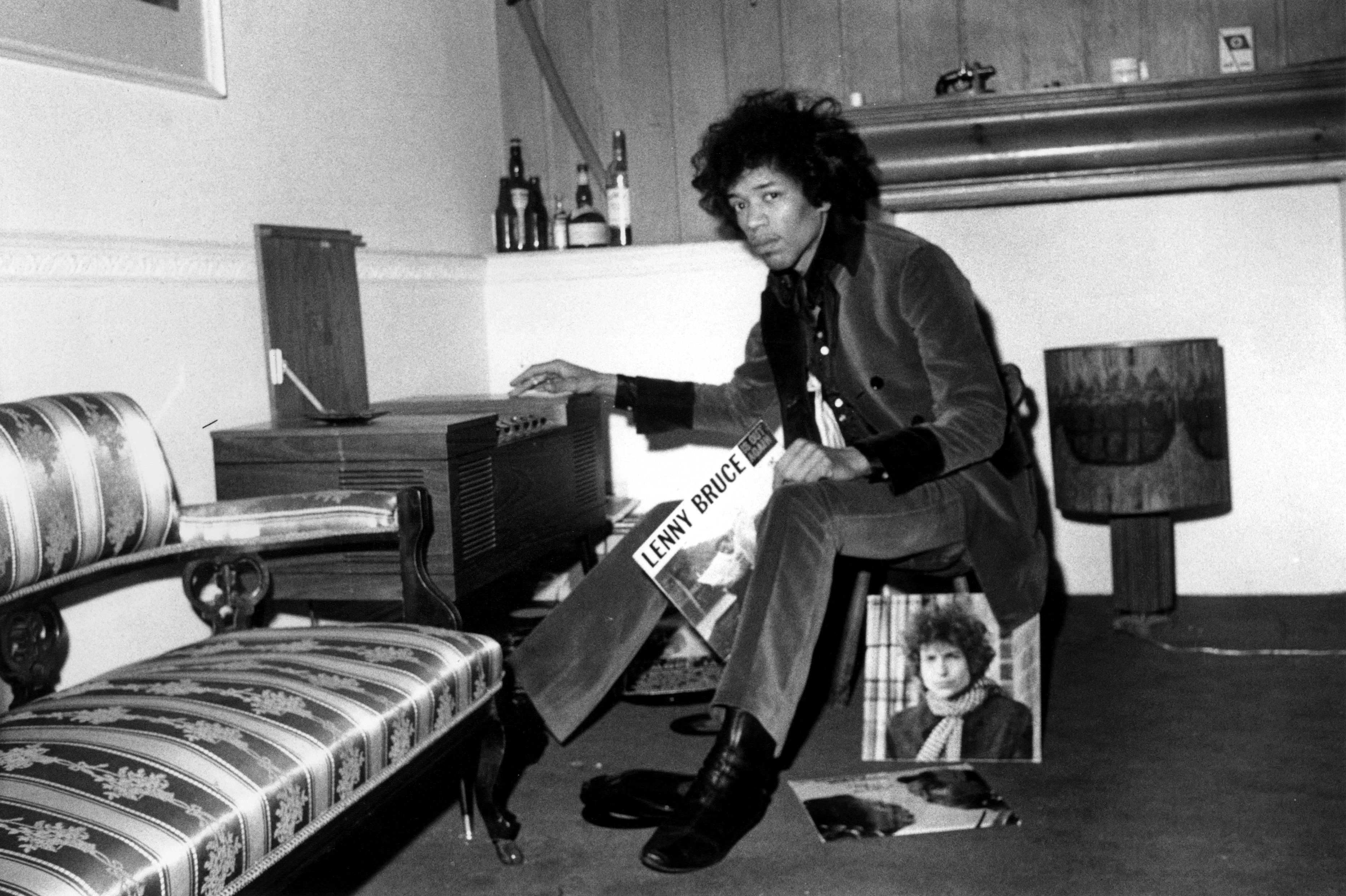 “I actually saw Jimi Hendrix perform when he was in a band called Jimmy James and the Blue Flames — something like that. And Jimi didn’t even sing. He was just the guitar player. After he became famous, he took some small songs of mine that nobody paid any attention to and pumped them up into the outer limits of the stratosphere and turned them all into classics.”

Prior to his name stage, Hendrix did perform with the blues-based Blue Flames at the Café Wha? in New York’s Greenwich Village, all around the time Dylan was in the area (1965). According to John McDermott, catalog director for Experience Hendrix, “Jimi wasn’t singing that much at that time. He sang some blues. But he wasn’t the Jimi Hendrix that [manager] Chas Chandler helped shape. No doubt Dylan could have seen an instrumental set from Jimi.” As far as the “small songs,” Dylan may be pulling our legs, given Hendrix eventually covered “Like a Rolling Stone,” but Dylan is most likely referring to Hendrix’s overhauls of “All Along the Watchtower” (which Hendrix helped transform into an FM rock staple), “Drifter’s Escape,” and “Tears of Rage.” “Dylan clearly struck some chord in Jimi,” McDermott says. “Maybe it was Dylan’s openness or freedom, but something caught Jimmy’s ear. It was great that Bob said what he did.”

“The Blackwood Brothers have been talking to me about making a record together.”

Given the many musical byways Dylan has traversed in his career — remember his straight-faced, old-fashioned Christmas album? — a white-gospel record isn’t remotely out of his wheelhouse. According to Ron Blackwood, manager of the Blackwood Quartet, Dylan has indeed expressed interest in such a project. (The Quartet is different from the Blackwood Brothers Quartet, a still-ongoing white gospel group that was formed in 1934 and cofounded by Ron Blackwood’s father; Dylan may have confused the two names in his speech.)

“Ahmet Ertegun didn’t think much of my songs, but Sam Phillips did. . .I didn’t really care what Leiber and Stoller thought of my songs. They didn’t like ’em, but Doc Pomus did.”

Mike Stoller, the surviving member of the (Jerry) Leiber and Stoller songwriting duo that gave us “Stand by Me,” “Spanish Harlem,” “Yakety Yak,” and many more, was not available for comment, and Ertegun’s widow, Mica, can’t recall any such remarks supposedly made by her late husband. It’s more revealing of Dylan’s love of pop craftsmanship that he gave props to Pomus, the wheelchair-bound writer (often with Mort Shuman) of “Save the Last Dance for Me,” “This Magic Moment,” “Little Sister” and other early-rock-era gems. At Dylan’s suggestion, the two met to write some songs together in 1986. And according to writer Peter Guralnick, who’s working on a Sam Phillips biography, the founder of Sun Studios and Sun Records was indeed one of Dylan’s champions: “Sam loved Dylan and said many times that Dylan was one of the few contemporary artists he’d like to produce. He was outspoken in his advocacy of Dylan’s uniqueness and individuality — ‘in the extreme,’ as Sam would say.” Alas, Phillips, who died in 2003, was never able to realize his dream of working with Dylan. 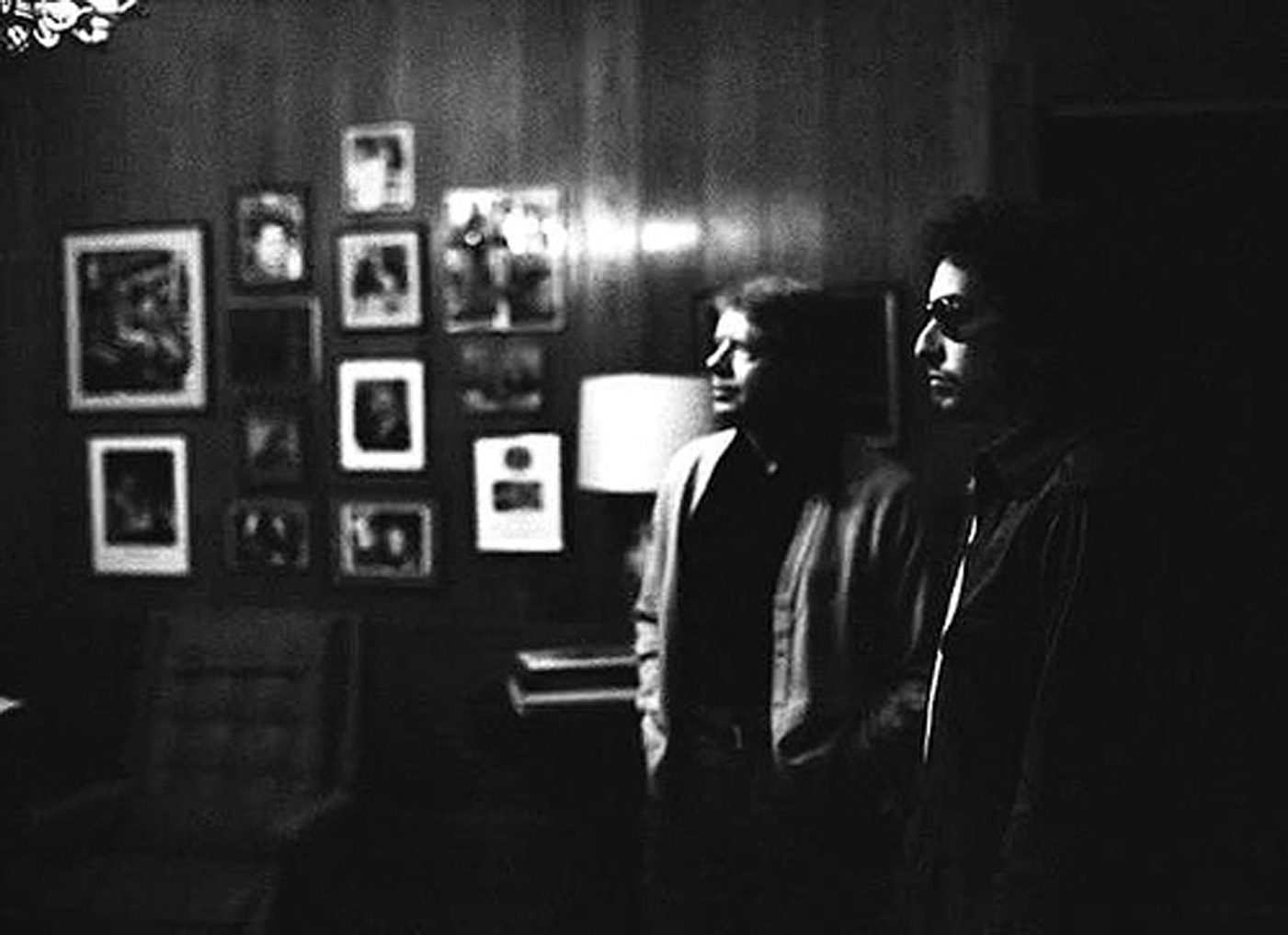 “I also want to thank President Carter for coming.”

The bond between Carter and Dylan goes back at least 40 years. In 1974, Carter, then governor of Georgia, invited Dylan and the Band to the governor’s mansion for a visit. During his presidential campaign in 1976, Carter quoted lines from “Blowin’ in the Wind.” And during his acceptance speech to be the Democratic Party’s nominee that summer, Carter invoked “It’s Alright, Ma (I’m Only Bleeding)”: “We have an America that, in Bob Dylan’s phrase, is busy being born, not busy dying.” In the decades before presidents flaunted their rock and hip-hop choices on their iPods, such citations were, to say the least, rare — further proof that Carter was our first rock & roll president.

“Critics say I can’t sing. I croak. Sound like a frog. Why don’t critics say that same thing about Tom Waits? . . .Why don’t they say those things about Leonard Cohen? Why do I get special treatment?”

If anyone ever wondered if Dylan reads his press, this comment (and references to write-ups of his new album of standards, Shadows in the Night) settled that question. Of course, Dylan has a point about his voice being the target for critical barbs dating back over 50 years. But his two fellow singer-songwriters have come in for their share of criticism. Rolling Stone‘s review of Cohen’s first album, Songs of Leonard Cohen, noted his “strange voice,” and its write-up of the followup, Songs from a Room, noted, “It doesn’t take a great deal of listening to realize that Cohen can’t sing, period. . .The first thing that has to be withstood is his voice. It’s monotonous in a literal sense of the word.” Of Waits, the magazine’s Record Guide noted that his “gravel-voiced poetic renditions can become tedious for all but cultists.” At least Dylan’s in good company.

“Rock & roll is a combination of blues, and it’s a strange thing made up of two parts. A lot of people don’t know this, but the blues, which is an American music, is not what you think it is. It’s a combination of Arabic violins and Strauss waltzes working it out. But it’s true.”

Based on those vivid comments, Dylan would make a pretty good rock critic himself.

“I was at a boxing match a few years ago seeing Floyd Mayweather fight a Puerto Rican guy. . .It was time for our national anthem. And a very popular soul-singing sister was chosen to sing. She sang every note that exists, and some that don’t exist. Talk about mangling a melody. . .”

It’s no shock that Dylan wouldn’t be a fan of melisma, which can be done tastefully (think Stevie Wonder at times) and sometimes not so much (many overbaked examples on the pop charts over the last decade-plus). In this left-field case, Dylan is apparently referring to Marsha Ambrosius, the former half of Floetry who’s written songs covered by Michael Jackson, Alicia Keys and Kelis. Ambrosius did sing “The Star-Spangled Banner” during a 2012 fight in Las Vegas between American boxer Mayweather and Puerto Rican fighter Miguel Cotto. 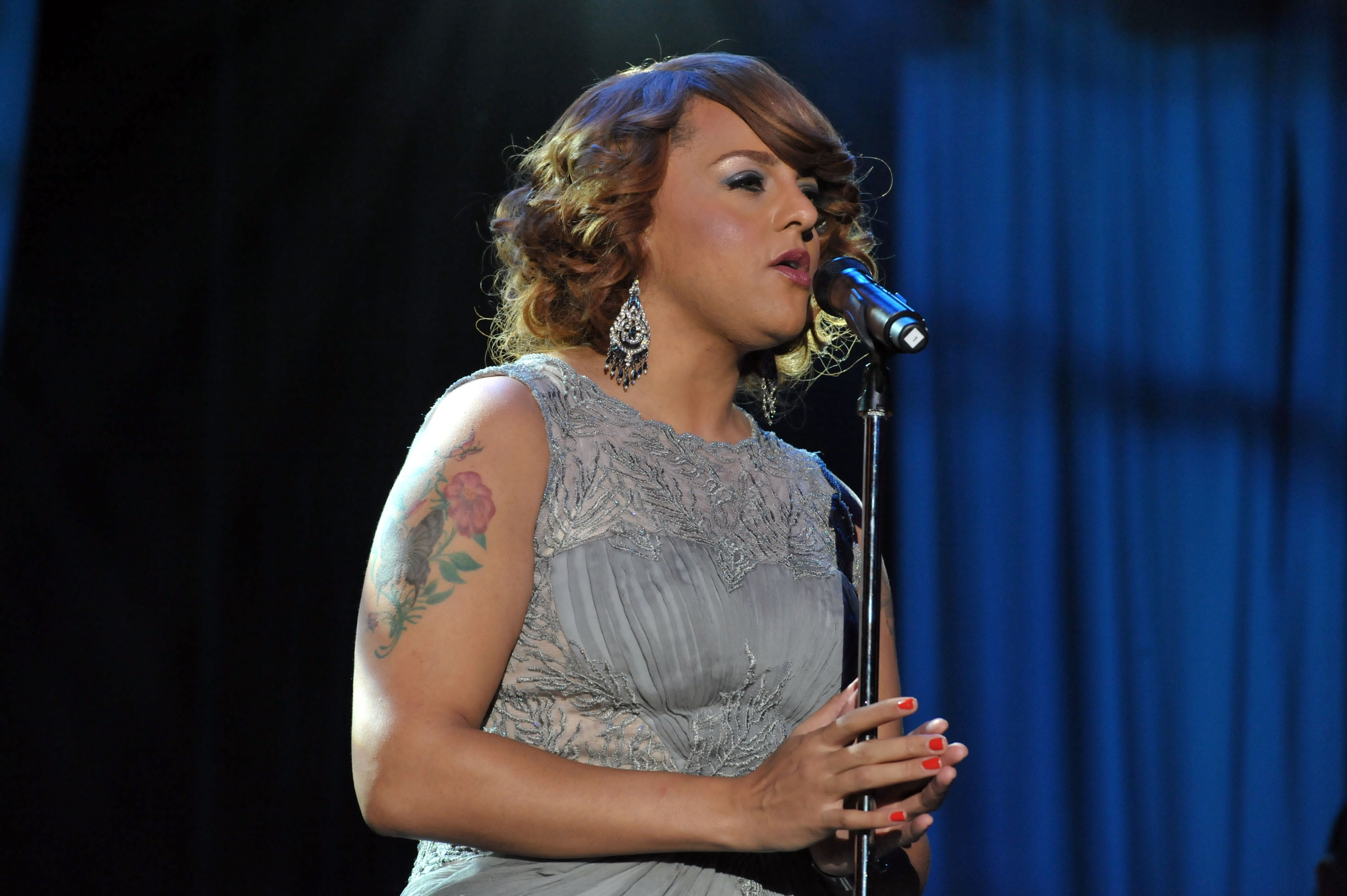 Of everything Dylan mentioned that night, this comment struck many as one of the most puzzling. Ten years ago, Dylan and the country icon toured together, and in 2013, Haggard told RS he was planning a Dylan tribute album. “I’m singing the ones that I love the most, with Bob’s blessing and a lot of people’s interest,” Haggard said. “You know, he’s just the greatest songwriter I think of our time. It would be a toss up between him and Kris Kristofferson.” The album never came to fruition, but Haggard just cut a version of “Don’t Think Twice It’s All Right” with Willie Nelson. In response to Dylan’s remark last weekend, Haggard tweeted, “Bob Dylan I’ve admired your songs since 1964.”

“I’d like to personally thank [MusiCares] for what they did for a friend of mine, Billy Lee Riley. . .You won’t find him in the Rock and Roll Hall of Fame. He’s not there. Metallica is. ABBA is. Mamas and the Papas — I know they’re in there. Jefferson Airplane, Alice Cooper, Steely Dan. . .Billy Lee Riley is not there. Yet.”

It was fitting that Dylan ended his speech with a reference to an early rock & roll hero who was aided by MusiCares, the division of the Recording Academy that helps musicians with financial and medical assistance. MusiCares helped with medical and mortgage bills for Riley, the rockabilly fireball best known for the wonderfully salacious “Red Hot” and the zippy “Flying Saucer Rock & Roll.” As Dylan said earlier in the speech, “If you can’t hardly play the blues, and you don’t have the hillbilly feeling, you’re not really playing rock & roll.” Riley died of colon cancer in 2009 at age 75 in 2009. As far as the Hall of Fame and who has been inducted and who hasn’t — Dylan is accurate on all those counts.