A look back at Whitney Houston's music - Rolling Stone
×
× 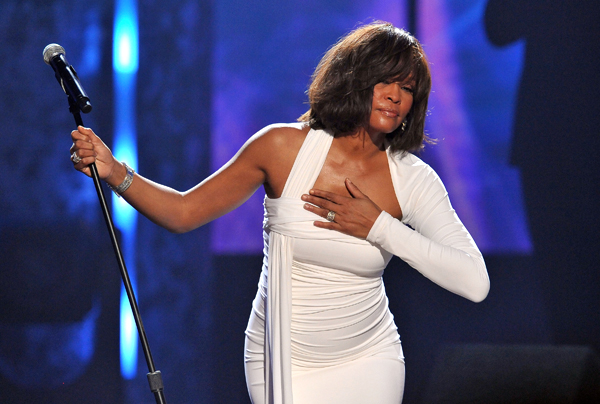 One word. Near the end of “The Greatest Love of All,” the third straight Billboard Number One single for the 22-year-old Whitney Houston, the singer transformed the tone of the song from sweetly exalted to absolutely unstoppable. “No matter what they take from me, they can’t take away myy! dig-ni-ty,” she thundered on the second pass through the verse, distilling all the great gospel and soul legacy of her very talented family (mother Cissy Houston, cousins Dionne and Dee Dee Warwick, godmother Aretha Franklin) into a single syllable.

The c0-author of the song, Linda Creed, wrote it about her own battle with breast cancer. After living with the disease for a decade, she died at age 36 in April 1986, a month before Houston’s version hit the top of the charts. Houston was just getting started. Perfecting a definitively Eighties brand of pop-soul – smooth-jazz keyboards and rhythms, swelling orchestration – she was, for a good stretch, the brightest star in an era marked by super-duper-stars.

Though she had one of the most astonishing, confident voices pop had ever heard, she also had restraint, and she dealt with criticism that her style was airbrushed. “You’re not black enough for them,” she explained to Katie Couric in a 1996 interview. “You’re not R&B enough. You’re very pop. The white audience has taken you away from them.” But Houston’s voice was no appeasement, and the fact that she didn’t push every line over the edge meant each of her songs contained a signature moment – sometimes as fleeting as that “my dignity” – when she vaulted the song into the realm of divine possession. When she was singing, she knew precisely what she was doing, always.

She hit the mark on the full-hearted pity party “All At Once,” when she took the line “I looked around and found that you were with another love” up and up, like a dizzying hot-air balloon ascent. She did it on “All the Man That I Need,” when her voice broke into a heart-stopping flutter on the last word of the line “He gives me more love than I’ve ever seen.” She made patriotism sound like the greatest joy on earth with her resplendent version of “The Star-Spangled Banner.” And the sustained note that centers her version of Dolly Parton’s “I Will Always Love You” – “and Aaaaah-e-aye, will always love you” – raises the song from a bittersweet memory to the power of existence itself.

Whitney Houston lived for the moment. Sadly, it eventually led to addiction, and the ravaging of her extraordinary voice. But if gospel music was created to express those moments of pure communion with your inner truth, then Whitney Houston was undoubtedly heaven-sent.