Fans of Lizzo will have to hold out just a little longer for a new album from the singer, but they will get a chance to see the “Rumors” star on stage next month, as part of a special one-night-only performance in conjunction with American Express.

Lizzo is headlining the final concert of the year for American Express’ UNSTAGED digital music series. The event, meant to promote American Express’ insider access to top artists and events, takes place tomorrow, December 4, and will be available to stream online via LIVENow. A select number of tickets were also made available for fans who want to attend Lizzo’s concert in person in Miami, though they have since sold out online.

Lizzo, who hasn’t performed a full concert in nearly two years, says she’s looking forward to playing again in front of a live audience. “I’m a little rusty but I’m so excited to be back on stage because this is where I belong,” she tells Rolling Stone. “Live music and connecting with people — this is what it’s all about.”

The concert, taking place during Art Basel weekend, is expected to run just over an hour long, with a setlist spanning some of Lizzo’s most popular hits, including her latest track, “Rumors.” The singer also tapped director Chris Robinson for the show, working with him to bring her songs to life (Robinson was nominated for a Grammy for his work on Nas’ music video for “One Mic,” and has worked with artists like Jay-Z, Rihanna and Outkast in the past). In a press release, American Express says to expect a “one-of-a-kind pyrotechnic performance, highlighting Lizzo’s fan favorites and new songs.”

Lizzo isn’t revealing all her cards just yet, though she teases that fans can expect something completely different from what they’ve seen — and heard — from her in the past.

“Doing this at Art Basel really inspired me and my team to just get weird,” Lizzo says, teasing “crazy iMacs,” “stairs” and a full stage with dancers. “I feel like we have the opportunity to just step outside of our comfort zones and make something super interactive,” she continues, “and I’ve never done anything like this before.”

She’s also excited to be in front of a crowd again, after being limited to virtual appearances during quarantine. “[Zoom] isn’t the same because I don’t get to touch people,” she says. “It’s got to be moving and sweating.”

Still, the singer says, “I was grateful for the opportunity to just give to myself for a bit, because I know that once I take that stage again, baby, that foot and that toe is not un-touching the stage for a while.”

Lizzo last performed at the Outside Lands festival back in October, but the singer was most recently spotted at the taping of Adele’s One Night Only special. Did she take any inspiration from her fellow diva’s return to the live stage?

“Adele is someone who I’ve never seen live and I’m just like, ‘Oh I feel so connected to her,'” Lizzo says, revealing that she was personally invited by the UK star to attend the show. “When you hear her voice? Everyone in the room gets goosebumps; everyone in the room’s eyes tear up; everyone in the room can feel it. I love having visceral experiences like that, with musicians who kind of transcend the song and who are an incredible presence,” she continues. “These are singers with voices that truly touch your heart.”

There are a few ways to watch Lizzo’s American Express concert online, which is streaming on live-now.com.

A general admission ticket costs $9.99 and gets you access to the live stream plus free replays for up to 48 hours after the initial airing. You don’t need to be an American Express member to purchase this live stream ticket.

American Express card holders can purchase exclusive “Amex Fan Packages,” which include everything from signed photos to limited-edition apparel, to a virtual meet-and-greet with Lizzo herself. Amex card holders can also unlock a “mobile second screen experience,” which lets you access exclusive merch that you can only get with your card.

Pricing for the Amex Fan Packages start at $9.99 for a live stream link and digital signed photo. The Amex VIP Package costs $262.99 and includes the live stream, digital photo, signed poster, a limited-edition hoodie and a chance to “meet” Lizzo online before the show. 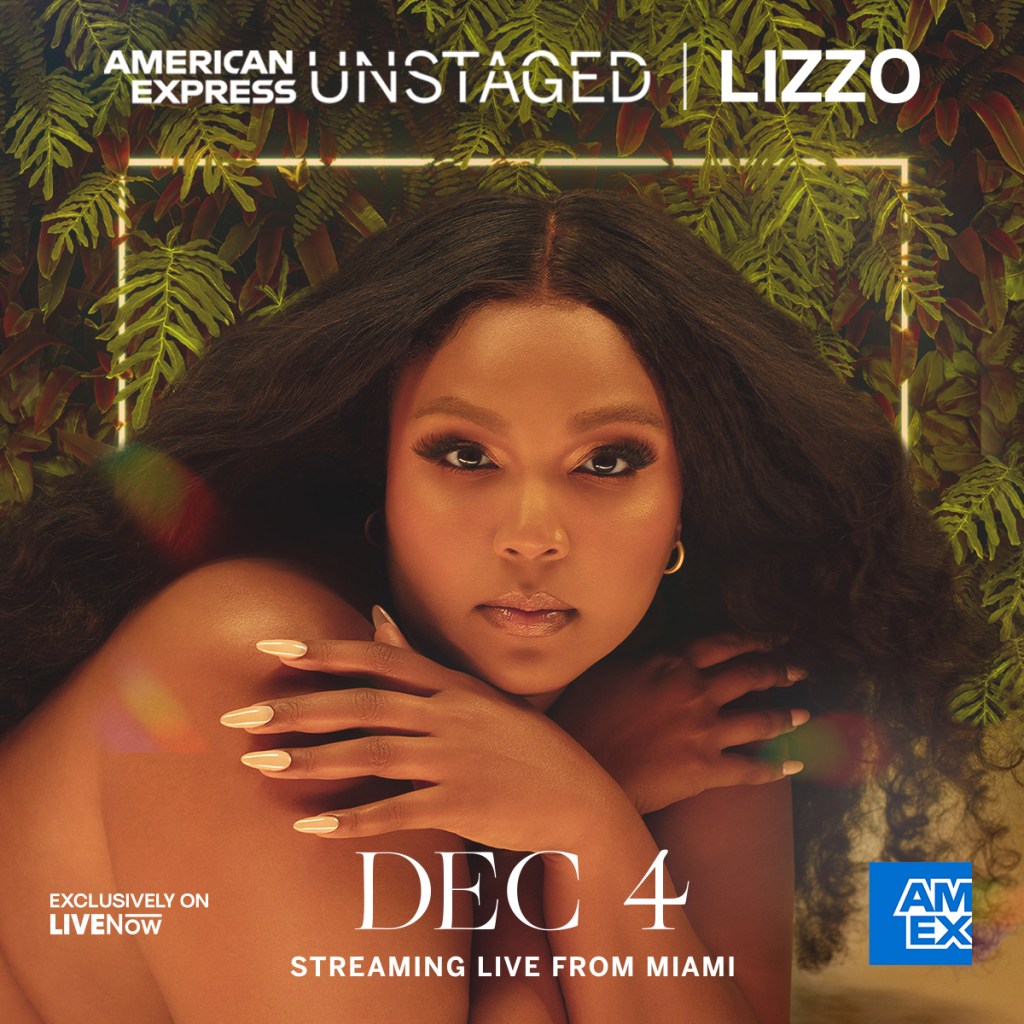 Fans who have all purchased a live stream ticket to Lizzo can also watch the American Express UNSTAGED performance with up to three friends and join a video chat together using LIVENow’s “Watch Together” feature. See full concert details and ticket info at LIVENow.com.

“American Express worked with Lizzo in 2019 to celebrate the 50th Anniversary of Stonewall Pride in New York as well as on her ‘Cuz I Love You Too’ tour and the response was overwhelming,” says Brandy Sanders, Vice President, Global Entertainment Partnerships & Experiences, American Express. “Not only did we know, in that moment, that we had to work with her again but that we had to bring it to a global audience, which American Express UNSTAGED provides us the opportunity to do. It’s just another way we show our Card Members that music is better with Amex.”