The funky rock ‘n’ soul collective Fitz & The Tantrums, led by dashing blue-eyed soulman Michael “Fitz” Fitzpatrick and fiery R&B goddess Noelle Scaggs, has finally followed up 2010’s Pickin’ Up the Pieces with the long-overdue sophomore album, More Than Just a Dream. And with a new major label, Elektra Records, and an updated sound that owes as much to the ’80s and it does to the ’60s, the band is about to blow up, big-time.

The Tantrums’ story is hardly an overnight one. Theirs is a rare case these days, in that they earned their success the old-fashioned way: through tireless touring and word-of-mouth. Possibly the hardest-working band in showbiz, Fitz & The Tantrums totally deserve their hard-won hype. 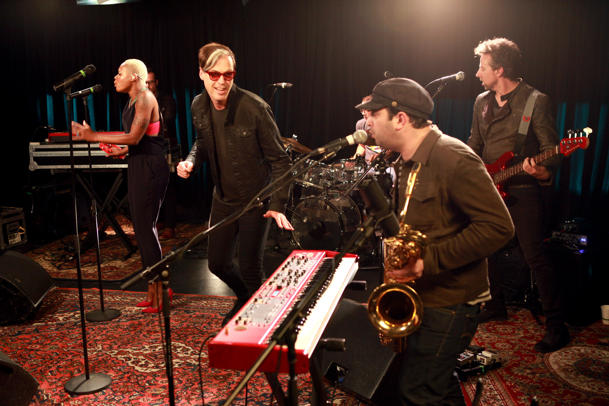 The band recently came to Yahoo! Studio to play tracks from More Than Just a Dream, including the peppy new single “Out of My League,” which is shaping up to be THE jam of summer 2013. And they played the intimate room like they were playing Coachella or Bonnaroo, truly proving that they’re in a league of their own.

Check ’em out in all their Fitztastic glory:

Afterwards, the band’s Michael, Noelle, and drummer John Wicks sat down with Yahoo! Music to talk about the evolution of their sound, their long and atypical musical journey, and the Fitz live experience: