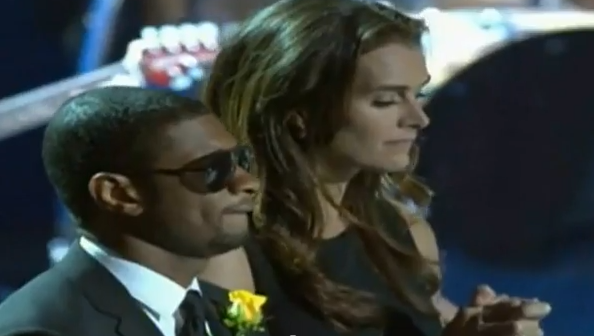 When Judith Hill auditioned on “The Voice” Season 4’s premiere this week, she wowed all four coaches and 13 million-plus viewers with her dynamite diva vocals. But this wasn’t the first time that she’d performed for a massive TV audience: Back in 2009, Judith was hired to be Michael Jackson’s duet partner for his This Is It London shows, and when those concerts were cancelled after Michael’s shocking death, she sang “Heal The World” at his Staples Center memorial service, which was viewed by more than a billion people around the world. It was a performance to remember, for sure. But bizarrely, new “Voice” judge Usher, who also performed at the Jackson memorial and actually stood onstage behind Judith that day, didn’t recognize her when she tried out for “The Voice”–not when he spun his chair around, and not even when she said her name.

Speaking to Yahoo! Music’s Reality Rocks, Judith says she and Usher did briefly interact backstage at the memorial–but she doesn’t seem too surprised, or insulted, that Usher doesn’t remember her four years later. “The night before the rehearsal, which was a very sobering rehearsal, kind of teary-eyed, I just kind of passed by him and gave him a respectful head-nod,” she recalls. “And he gave me a head-nod back, but that was really the extent of our communication. So I wasn’t sure if he was going to recognize me when his chair turned. And he didn’t–so that was interesting, you know?”

So, did Judith (who eventually joined Adam Levine’s team, not Usher’s) try to jog Usher’s memory after their reunion on “The Voice”? Says Judith: “No, I didn’t even bring it up; we haven’t had any discussion about Michael or anything like that. I haven’t seen him since the Blind Auditions. There was so much going on, it’s hard to even ask someone to remember you. But I’ll be curious to see if he remembers me, or if he puts the pieces together. And that should be interesting!”

Considering how spectacular Judith’s MJ memorial performance truly was–Usher may not remember it vividly, but many other music fans do–it’s hard to believe that she even needed to go on a show like “The Voice” to advance her career. Judith says she did receive plenty of music-business offers after that fateful day in 2009, but she was wary of moving forward. “It was so overwhelming, with all of these different people from the whole world calling me up, and I just needed time to process that,” she explains. “Michael had just passed, and it was just a really, really intense time. I’m glad I didn’t make any rash decisions or try to capitalize on that moment, that I just really took the time to process it and really figure myself out as well.

“I had all sorts of weirdos coming at me [with possibly shady offers], and I didn’t know who to trust,” Judith admits. “I was kind of overwhelmed. You know, a lot of people may promise you the world or say certain things. I did get into a few different situations, and I learned quickly that these people weren’t right for me or they had other motives that weren’t clean. I learned a lot. It was good to go through that process and realize that I’ve got to be careful.”

And what did Judith, who hasn’t ruled out doing a Michael Jackson cover on “The Voice” if it feels right, learn from her brief time working closely with the one and only King Of Pop? “Oh, my goodness, I learned so much from him,” she raves. “I mean, the fact that he was a perfectionist…I learned, more than anything, to dream big and really have your imagination be big, and to work hard to make that dream possible. Michael had such dreams for the stage, like he was so picky about the particular lighting or how the drums should sound…it really challenged me to figure out what my dreams were, and work really hard. Michael was the hardest-working man in the business, and it was incredible seeing him and working with him.”

Certainly Judith’s experience with Michael should help her on “The Voice”–after all, if she has worked with a legend like MJ, then teaming up with Adam Levine should be a breeze, and if she has already performed on live television for a billion viewers, then nothing about being on “The Voice” should feel intimidating, right? Well, Judith admits that her illustrious professional background will give her some advantage in this competition, but confesses: “I still get nervous. I was jittery at my ‘Voice’ audition! I found myself feeling more nervous at the Blind Auditions than I did with my other [performance] experiences, because this is a singing competition and basically they’re judging you, versus being on a stage where there are no chairs turning. There’s so much pressure to perform well–they’re going to judge you, they’re going to pair you up with someone, they’re going to eliminate you…there’s a lot of that sort of thinking. I’ve never experienced that in my life, so this is really hard for me, and I’ve had a lot of anxiety. The concept of it being a contest has been really hard for me to digest, so I think the most important thing I’ve got to do is find my Zen and my calm and just be who I am, and not worry about people judging me.”

Speaking of judges, will Judith ever give Usher a hard time about his little embarrassing memory lapse (which was sort of similar to the one that previous “Voice” judge Christina Aguilera had in Season 2, when she initially failed to recognize her old “Mickey Mouse Club” castmate Tony Lucca)? Judith laughs, “Oh, yeah, if the time comes, I’ll be like, ‘Hey, it’s me!'” Let’s hope the NBC cameras capture that exchange when and if it happens (that’d be some TV gold), but regardless, it’s certain that Usher will never forget Judith Hill again.