“The Voice” Season 4 has come to an end. This means that Shakira and Usher will have vacated the red spinning chairs that they’ve been keeping warm for on-hiatus coaches Christina Aguilera and Cee Lo Green, who’ll return to the show this fall.

Shakira and Usher have become popular “Voice” cast members during their short run on the show — some viewers even seem to prefer them to their predecessors, if the comments in this very blog have been anything to go by. But don’t worry: Shakira and Usher will be back next year, for Season 6. And those of you who’ve been missing Xtina and Cee Lo, fear not — their return in Season 5 is just a few months away.

But until then, it’s time to ask the inevitable question: Who judged it best? Let’s answer that by staging our own Shakira/Xtina and Usher/Cee Lo “battle rounds”…

Manners: Shakira is definitely the kinder, gentler diva here. Shakira greets everyone with a smile and oodles of enthusiasm and affection, and she always “roots for the nice guys.” Christina, on the other hand, is not always so nice. Remember that time when she rudely texted and sipped Starbucks during Tony Lucca’s performance? Or when she spent her entire critique of Juliet Simms’s fantastic “Man’s World” bragging about her own performance of the same song at the Grammys? Or how she picked on the amazing Amanda Brown throughout Season 3? Sheesh. Shakira would never stoop so low.
WINNER: Shakira

Fashion: Yes, Shakira always kept it classy, and kept covered-up, and I appreciated that this season. But I kind of missed Xtina’s endless, eye-popping array of Spanish lace fans, spaceship-shaped royal wedding hats, leather diapers, doll-hair wigs, bachelorette-party tiaras, and down-to-there plunging necklines. It was always fun, or at least funny, to see her black-bar-worthy fashion Don’ts week after week. I admit I’m already excited to see what sort of crass, crazy costume Xtina will rock on the Season 5 premiere.
WINNER: Xtina 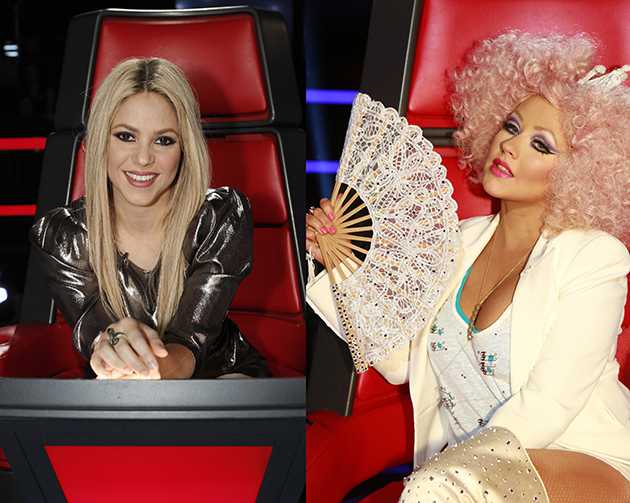 Expertise: Both Christina and Shakira have made their unfair shares of coaching mistakes. Christina’s past flubs included cutting Jesse Campbell in Season 2, letting Aquile and De’Borah go in Season 3, assembling a team of interchangeable mini-me’s in Season 3, and being so obnoxious during her Season 2 feud with Adam Levine that she pretty much ruined her finalist Chris Mann’s chances of winning. Shakira’s track record hasn’t been perfect, either. Her egregious Season 4 errors have included letting Luke Edgemon slip away in the Battle Rounds, pitting Garrett Gardner against Tawnya Reynolds and Shawna P. against Sasha Allen in the Knockout Rounds, and choosing a really unsuitable Backstreet Boys song for poor rocker Garrett that ensured his premature doom. But at least Shakira put together a diverse team, and she made a couple of smart, strategic Steals in the Battle Rounds (Karina Iglesias and Sasha). So this round narrowly goes to…
WINNER: Shakira

Vocals: Let’s face it, this show IS called “The Voice.” And while both Shakira and Christina have their annoying vocal tics — Shakira sometimes sounds like one of those screaming YouTube goats, and Xtina often grunts like she’s giving birth mid-song — in the end, Christina is the stronger singer of the two, and really one of the strongest singers of her generation. So that gives her some extra cred.
WINNER: Xtina

Manners: I expected Usher, an R&B heartthrob, to come across as a lothario and a lech. But he’s been quite a gentleman, for the most part, other than one slightly off-color joke about the Swon Brothers’ “Fishin’ in the Dark” and his tendency to always sit in his red chair with his legs splayed wide open. Cee Lo, on the other hand, always blatantly, ickily flirted with the show’s female contestants, sometimes even letting his libido make bad decisions for him. (Remember Erin Martin? DOMO? I rest my case.) Gross.
WINNER: Usher

Fashion: Usher may be a sharp-dressed man, but there’s no contest here. Cee Lo is a fashion icon! Some of his “Voice” getups have made Xtina look positively plain. Cee Lo has worn a white Tony Manero leisure suit, spiked Stormtrooper armor, a Prince costume (complete with Jheri-curled wig), a fringed Elvis jumpsuit (complete with matching pompadour wig), head-to-toe red Billy Idol leather, a leopard-print cape, and even zebra-striped satin pajamas on the set of “The Voice.” The wardrobe budget for this show is going to at least quintuple when Christina and Cee Lo return.
WINNER: Cee Lo 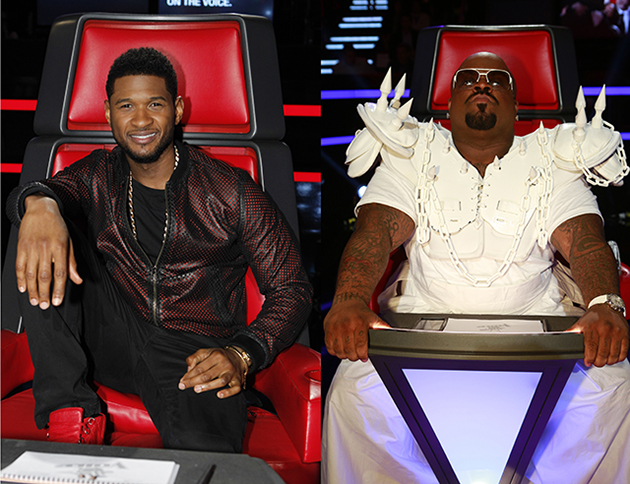 Expertise: Usher has made some sound decisions this year, mainly when supporting THE coolest contestant of Season 4, Michelle Chamuel. But Cee Lo, of all the coaches in “The Voice’s” four seasons, has the most illustrious and impressive history of picking truly interesting, outside-the-box singers. Cee Lo took chances with acts like Vicci Martinez, Nakia, Juliet Simms, Jamar Rogers, Tony Vincent, the Shields Brothers, Jamie Lono, Nicholas David, Cody Belew, MacKenzie Bourg, Diego Val, and Chevonne, some of the most unique contestants to ever compete on the show. I’ve missed his risk-taking this season (I bet he would have LOVED Midas Whale and Grace Askew), and I look forward to seeing the choices he’ll make in Season 5.
WINNER: Cee Lo 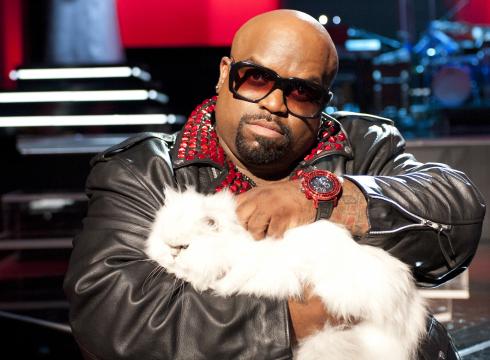 Pets: In Season 2, Cee Lo’s sidekick was a lap cat that had its own Twitter handle, T-shirt line, and pop single. In Season 3, he adopted a rare shoulder-dwelling parakeet named Ladybird. He even once sang a duet with Kermit the Frog and recorded a Christmas song with a flock of furry Muppets. Cee Lo should really have his own spinoff series on the Animal Planet network. Meanwhile, where are Usher’s animals? The guy doesn’t even own a goldfish, apparently. Boo.
WINNER: Cee Lo

Going by the tallies above, Shakira and Christina are tied, while Cee Lo narrowly beats the (also worthy) Usher. Which “Voice” coaches did you prefer? Sound off in the comments section below!