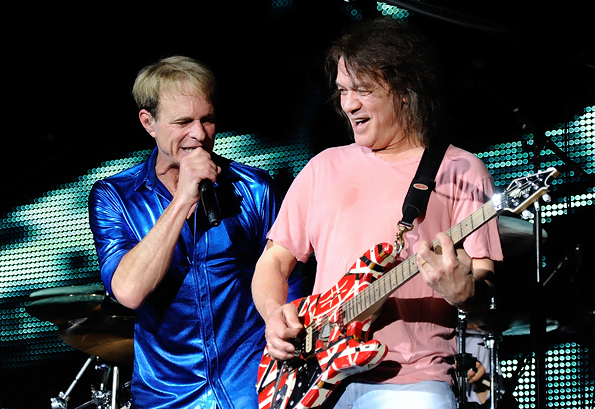 Van Halen‘s rise to rock godliness in the late Seventies and early Eighties came at a time of excess in all aspects of music, from big blowouts in the industry to well-chronicled decadence by musicians. That spirit was brought back to life – albeit in a much more PG, mostly sober way – Wednesday night in L.A. as the band prepared for its upcoming tour with a private show at Jim Henson Studios in L.A.

The first sign that this was a special event came as the lucky few hundred invited guests walked into the studio courtyard to be greeted by an open bar and food trucks serving a menu ranging from shrimp po’ boy sandwiches to tacos and ice cream cookies. This kind of lavish affair has largely migrated over from the worlds of film and video games as the music industry has struggled financially over the last decade. But a Van Halen tour and new album is a major occurence, plus a big excuse to party.

Early in the hour-long set, David Lee Roth quipped, “This was to be an 11 a.m. Tuesday press conference. Then someone moved it to Wednesday at 8 so we can drink.” Playing in a tiny studio with a stage that looked like it came right from Madison Square Garden, surrounded by three walls of massive LCD screens projecting every Roth movement and Eddie Van Halen riff in larger-than-life fashion, the quartet of Roth, Eddie, Alex Van Halen and Wolfgang Van Halen delivered a set worthy of the gods.

Opening with “Eruption” and segueing into “You Really Got Me,” the quartet ran through 60 minutes of greatest hits and new material. Roth could be seen peeking at his own moves on the LCD screens, perhaps making sure they were right for the tour. Ever the frontman, he made sure his trademark high kicks still reached his head, and he talked often to the crowd as the rest of the group concentrated on getting the songs into touring shape.

They’re damn close, as evidenced by several hits, including “Runnin’ With the Devil,’ “Unchained,” “Everybody Wants Some,” “Panama” and the closing “Ain’t Talkin’ ‘Bout Love,” which still rocks with enough power to make an intimate room feel like an arena. The band also played three new songs: “Tattoo,” “The Trouble With Never” and “She’s the Woman.” The former in particular fit right in (and yes, we’re aware the song dates back to the Seventies).

Following “Ain’t Talkin’ ‘Bout Love,” which Roth called the last song of the night, he told the crowd the band had no place to go. As confetti fell from above, two drum majors and a cavalcade of Carnival dancers ascended the stairs to the stage to join the band for an encore of “Jump.”

As the song ended, the dancers moved into the courtyard, where the party continued with a samba theme. Despite the international flair, this was American rock as only Van Halen does it – big, bold, brash and fun.