The second Boston Calling music festival kicked off on a sunny late-summer day, a welcome change from the previous incarnation’s unseasonably cold and rainy start. Located in the heart of the city at Boston’s City Hall Plaza, a mass of returning college students and locals alike gathered over the second two-day event in a matter of months.

With a lineup spanning indie rock to hip-hop to straight-up booty-quaking EDM, many of the highlights of the weekend were the top-billed acts. Vampire Weekend proved that prep-pop is perfect for Boston, Kendrick Lamar flew in to say “Wassup,” Major Lazer ensured that all pelvic muscles are sore in town this morning and Passion Pit returned home for the crown. Meanwhile, new kids on the block such as the lovely Lucius and magic ticket winners Viva Viva shone with the promise of good things to come.

As he did in the spring, Boston Mayor Thomas Menino took the stage on Saturday, welcoming everyone to his city and introducing Local Natives. They launched into their take on the Talking Heads‘ “Warning Sign” with a multi-part a capella introduction.

The Gaslight Anthem rocked for an hour and a half, which, to be honest, may have been a little long and a little too hard for the crowd. Luckily the day’s headliners, Vampire Weekend, were on hand to wrap things up on a high note. Crashline, the event promoters, couldn’t have picked a better band to close things out, and also to lead into the following day’s dance-heavy lineup. Ezra Koenig and his crew’s preppy, poppy dance-along wandered through their three albums, and it seemed everyone (and  we do mean everyone) knew all the words. When they encored with the regionally appropriate “Walcott,” which name-drops towns on the Massachusetts vacationland of Cape Cod, mayhem and a mass scream-along ensued.

Each day’s opening act was the winner of an emerging artist contest. On Saturday hometown band Viva Viva reunited from a hiatus, and their enthusiasm showed with twangy, psychedelia-infused rockabilly.

Lucius, who will release their debut album in October, are the best band you may not have heard yet. Fronted by a pair of matching blonde bombshells, they have been in heavy rotation on this summer’s festival circuit, and they’ve honed their skills with Sixties-infused dance rock that gets the crowds on their feet. 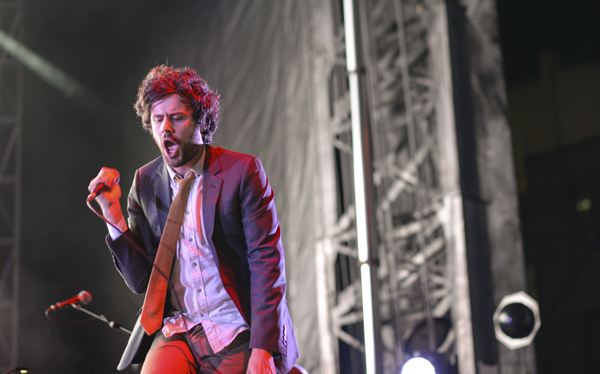 Providence, Rhode Island’s Deer Tick played their new album, Negativity, from top to bottom, infusing a little more dirge and drone before reaching back to close with “Ashamed” from 2007’s War Elephant. Bat for Lashes’ Natasha Kahn, easily the most colorful performer of the day, worked her rainbow dress and single drumstick, stalking the stage and performing haunting, tribal songs with highlights including “Laura” and “What’s a Girl to Do.”

Sunday had a change in vibe, both from the lineup and the crowd. As attendees streamed in, it was readily apparent that they had come to dance, with questionable club fashion – body glitter, short shorts, ironic T-shirts and furry accessories  – galore. The median age also dropped, plunging into the teens and low 20s, drawing a noticeably increased police presence in response to the growing attention to MDMA from recent deaths, one of which was here in Boston.

The highlight of the day – and possibly the entire weekend – came from Solange. Not one to be held under the shadow of her sister Mrs. Carter, Solange somehow managed to remain accented by the perfect amount of sun as she smiled and danced. She covered the Dirty Projectors’ “Stillness Is the Move” so well, they may as well be covering her. R&B has never been so sunny, both literally and figuratively.

No one can argue that Diplo isn’t one of the kings of the new EDM movement, and while his attempt at the world’s largest twerk-jam may have been preempted at last week’s Electric Zoo festival, he certainly tried to make up for it in a less official fashion in Boston. After flying around the crowd in his human-sized hamster ball, he and his collaborators had the crowd throwing their shirts in the air, screaming and twerking ’til you could feel the ground vibrate, all punctuated by some of the sketchiest backup dancers ever to take the stage. Like some sort of medieval gods, the group drove the bacchanalia to a fever pitch with a mix of classic tracks from House of Pain to Kris Kross, leaving kids in their “Where’s Molly” trucker caps panting with a new respect for the athleticism, at least, of Miley’s VMA performance.

Flying in on a private jet to make it on time, Kendrick Lamar proved that Boston don’t kill his vibe. He fired through a set that, while cut for some reason a half-hour short, had the sign language interpreter reaching deep into her bag of gesticulations on tracks such as “P&P (Pussy and Patron).”

Passion Pit are from Boston, and they were without a doubt the homecoming heroes. Singer Michael Angelakos stalked every inch of the stage like a man possessed, jumping from speaker to speaker as the band tore through a set on what must have been new gear (theirs was destroyed last week during a storm at Chicago’s North Coast fest). Starting with “Make Light,” the first song from their very first album, and ending with their freshest hit, “Take a Walk,” the band helped the second Boston Calling fade into the night a sweat-soaked, sore-footed success.