A previously unreleased Bob Dylan song lyric entitled “Go Away You Bomb” will be auctioned by Christie’s on June 26th. The song was written by Dylan in 1963 for Izzy Young of the Greenwich Village Folklore Center. “I asked everyone I knew to write a song about the nuclear bomb,” Young tells Rolling Stone. “Bob Dylan came in literally the next day and handed this to me.”

Written at the height of Dylan’s protest period, the song lyrics, which he wrote on a typewriter and then corrected by hand, bristle with anger and sarcasm. “An’ I hate you cause you could drop on my by accident an’ kill me,” he writes on “Go Away You Bomb.” “An’ I hate you twice as much as Jim Crow hates me.”

Bob Dylan to Tour With Wilco, My Morning Jacket This Summer

Young moved to Stockholm in the early 1970s, and the lyrics sat in a drawer until he rediscovered them a number of years ago. He was extremely reluctant to part with them, but the 85-year-old’s bleak financial situation forced his hand. “My daughter, who is 39, came to me and said ‘Papa, I’m sick of you surviving by miracles,'” Young says. ‘”You have to sell that Bob Dylan song.’ She convinced me I had to, and she moved it to a bank vault for me.” 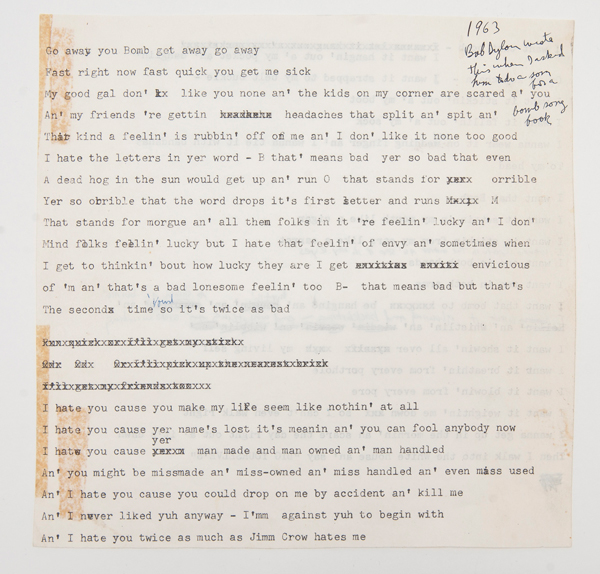 Dylan’s history with Young stretches all the way back to the songwriter’s earliest days in New York. Young was the owner and operator of the Folklore Center, a meeting place for local musicians full of rare books and records. “At first Dylan seemed like anybody else that came into the store,” says Young. “But I noticed after a while there was something different about him. He would take every goddamn record I had in the store and listen to them. He was the only one that read all those scholarly communist books. Anything I had in the store, he would read.”

Young arranged for Dylan to headline a show at Carnegie Chapter Hall, a small theater in the Carnegie Hall complex, on November 4th, 1961. Only 53 fans attended and Young lost money. “I tried to give him 20 bucks anyway,” says Young. “He refused to take it since I lost money. A lawyer friend saw us arguing about he suggested I just give him 10 dollars. We made that agreement and both of us felt good.” 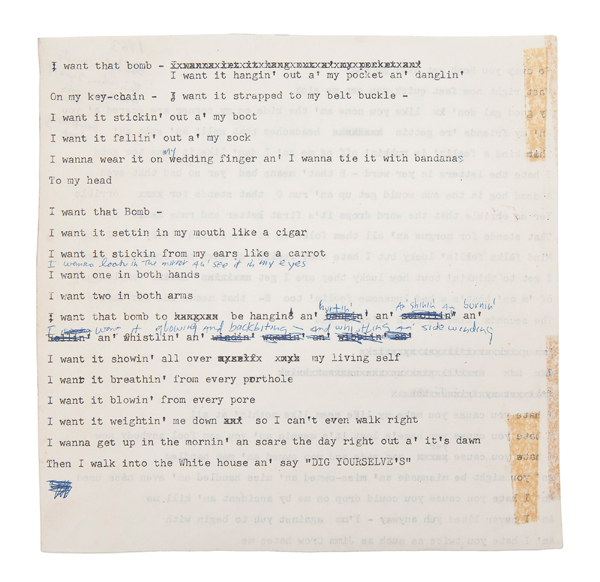