This November, Tyler, The Creator will bring his annual Camp Flog Gnaw festival series back to Los Angeles, and he’s coming with some big names: Kanye West and Kid Cudi. Each have performed at Camp Flog Gnaw in the past (Cudi as a headliner last year, and Kanye as a surprise appearance), but this is the pair’s first announced performance as the newly minted Kids See Ghosts since releasing their eponymous album this June.

This will be the seventh iteration of the festival. In addition to Kids See Ghosts, Tyler will be performing himself, alongside Post Malone, Lauryn Hill (for The Miseducation of Lauryn Hill‘s 20-year anniversary), SZA, Brockhampton, A$AP Rocky and more. Tyler will also be joined by Odd Future compatriots like The Internet, Earl Sweatshirt and Taco. The full lineup is available below.

The two-day festival will take place at Dodger Stadium on November 10th and 10th, and tickets go on sale this Friday, August 17, at noon PDT. 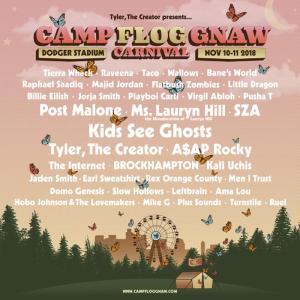