Tyler, The Creator Lets the 'Wolf' in at Intimate Brooklyn Show - Rolling Stone
×
×

The Odd Future brand has grown in broad increments since the crew first exploded across laptop screens almost three years ago: Bedroom recordings became critically acclaimed albums, viral prank videos gave way to a TV series and corporate ad campaigns, and doodles of cats and bikes on t-shirts blossomed into a booming merch business. But not much has changed on stage. At the Music Hall of Williamsburg last night, Tyler, Taco, Jasper, Mike G and Earl spat pastel-tinted rage between laughing fits and awkward dance moves for the 16+ crowd of devotees. (Watchful parents chaperoned from the balconies, cops lined the block outside the venue.)

Taco wound up the crowd with a DJ set before the show began, dropping Chief Keef and the Notorious B.I.G. with manager Chris Clancy’s toddler daughter turning up at his side. The stage was mocked up with artwork and props from Tyler, The Creator’s upcoming Wolf (due April 2nd), suggesting a twisted summer camp, complete with a tree stump, cabin and BMX bike. Tyler and Co. soon emerged to “French” off his breakout Bastard mixtape, and ran through a string of early material and many of the darker cuts from his debut Goblin including “Nightmare,” “Dracula,” “Tron Cat” and a full rendition of “Yonkers.” 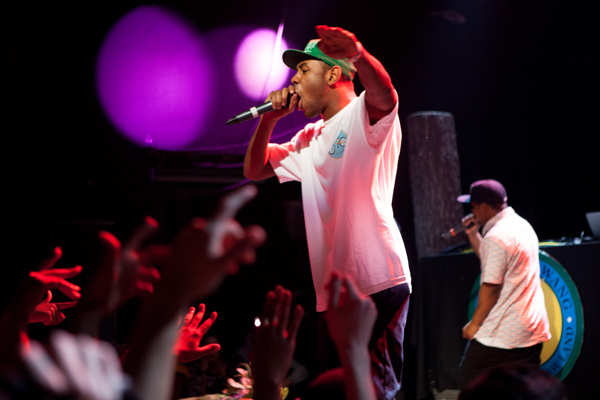 The exchange between artist and audience is paramount at an OF show, and the small venue allowed moments of writhing chaos and true intimacy: Fans pushed through moshpits to offer gifts and ask for selfies, and security was posted up at stage right to toss crowdsurfers back into the abyss when they wormed their way onstage. “Oh, it’s your birthday?” Tyler asked one girl shrieking for his attention. “Do you want me to sing happy birthday to you? Okay. Happy birthday, fuck you!”

Like any gifted MC, Tyler continues to self-examine through his lyrics and narrate his story before anyone else can – on new releases like “Domo 23” and Earl’s “Whoa,” his typical vitriol and self-loathing have given way to boasts of 50K checks and romps with European models. But on the new material previewed during the show, flashes of introspection shone brightest. He opened one track berating his father for still not picking up the phone, and later placed his bank account flexing in context: “You’d think all this money would make a happier me, but I’m about as lonely as crackers and skinny models be.”

Tyler’s production is more progressive and exploratory this time around, digging even deeper into the kick drums and colorful chords of his idol/mentor Pharrell. The upcoming single “Bimmer,” a playful love-letter about sharing Slurpies with a girl he thinks is “chill,” accented with harmonies from Frank Ocean, felt especially precious between the snarls and growls that dominated his set.

Despite the promise shown from sneak peaks of Tyler’s new material, it was his onstage chemistry with rhyme partner Earl that truly defined the night. Almost a year has passed since Earl returned to the United States to find all his friends had become rich and famous while he was shipped to reform school in Samoa, and the shock has seemingly worn off. Earl fit seamlessly into the set, cracking jokes and bouncing back and forth with Tyler on classics like “AssMilk” and “Orange Juice.” Their dynamic is still the heart of the group’s appeal, and they dominated the second half of the set as a duo, slapping each other with beef jerky sticks and bursting out laughing mid-verse.

The performance ended with “Sandwitches,” on which Tyler scoffs, “This n**ga had the nerve to call me immature. Fuck you think I made Odd Future for, to wear fuckin’ suits and make good decisions? Fuck that.” There were no suits & ties present, but as sweaty fans poured from the concert hall straight to the merch booth with weekly allowance to burn, one couldn’t help but think that Tyler’s made some pretty good decisions so far.