Ty Dolla $ign emerged in 2010 as the writer and hook-smith on “Toot It and Boot It,” a gleeful track by the rapper YG. The song demonstrated Ty’s musical chops — he managed to transform a sample of the Association’s Sixties sunshine pop into modern G-Funk — and introduced the world to the singer’s brash, lascivious persona: “I met her at the club, then I said wassup,” Ty croons. “I took her to the crib, and you know I fucked.”

Since then, Ty has released music at a remarkable rate (highlights include his Beach House 1 & 2 mixtapes), collaborated with everyone from DJ Quik to Charli XCX and Kanye West, become a go-to remixer of pop hits, and earned his own crossover success with the sleek 2013 smash “Paranoid.” His major-label debut album, Free TC, finally arrived last week; the project is dedicated to Ty’s brother TC, who is currently serving a prison term.

From 'Waiting to Exhale' to the Weeknd: Babyface on 20 Years of R&B

Rolling Stone spoke with the multi-instrumentalist and singer-songwriter about collaborating with Babyface, being ahead of the curve and his interest in EDM.

The release date for this album was pushed back a few times — was there a reason for that?
I felt like people wanted it to come out because “Paranoid” was hot and “Or Nah” was hot, but I had to let them know, shit’s still going to be hot. Let me marinate on the album and make sure it comes out perfect. We had to wait until I felt like it was perfect. And that’s November 13th.

But then you also dropped the Airplane Mode mixtape out of the blue.
That came from me reading my comments: Everybody was pissed a little bit because when we finally announced the album’s official date, that was two months before the album. They’re like, “Fuck, man, we need to hear some new shit!” So I’m like, “Alright, I got y’all.” So I put some shit out on October 13th, exactly a month before [the album]. Some of the songs were short, and people were pissed about that in the comments. They’re like, “What the fuck, man? I’m thinking my shit is broken, and it keeps on skipping to the next song!” I’m like, “Nah, I did that on purpose because I didn’t want to wear your ears out before the album.” I’ll come back after the album with the complete songs of whichever ones I felt like people really loved. And some more new shit. We do music all the time. I just let the people know: Never be worried. There’s always going to be the next shit. Nobody should worry ever. I’ma be here.

So you got both Babyface and Jagged Edge on this album.
Hella throwback, hella vintage. We can’t leave out Battlecat. I got Battlecat on shit playing vocoder and scratching. I got all my favorite elements that I grew up on. Jagged Edge is one of my favorite R&B groups. Babyface is one of my all-time favorite producers — and, like, the biggest paid [with the] most Number Ones. I was super grateful that he would work with me. His shit is totally different from mine, but we’re on the same musicality: I play guitar, I play keys, I play bass, I sing, I write for other people, I produce for other people. We’re basically the same guy except he has a million Number Ones and I have one or two [laughs]. 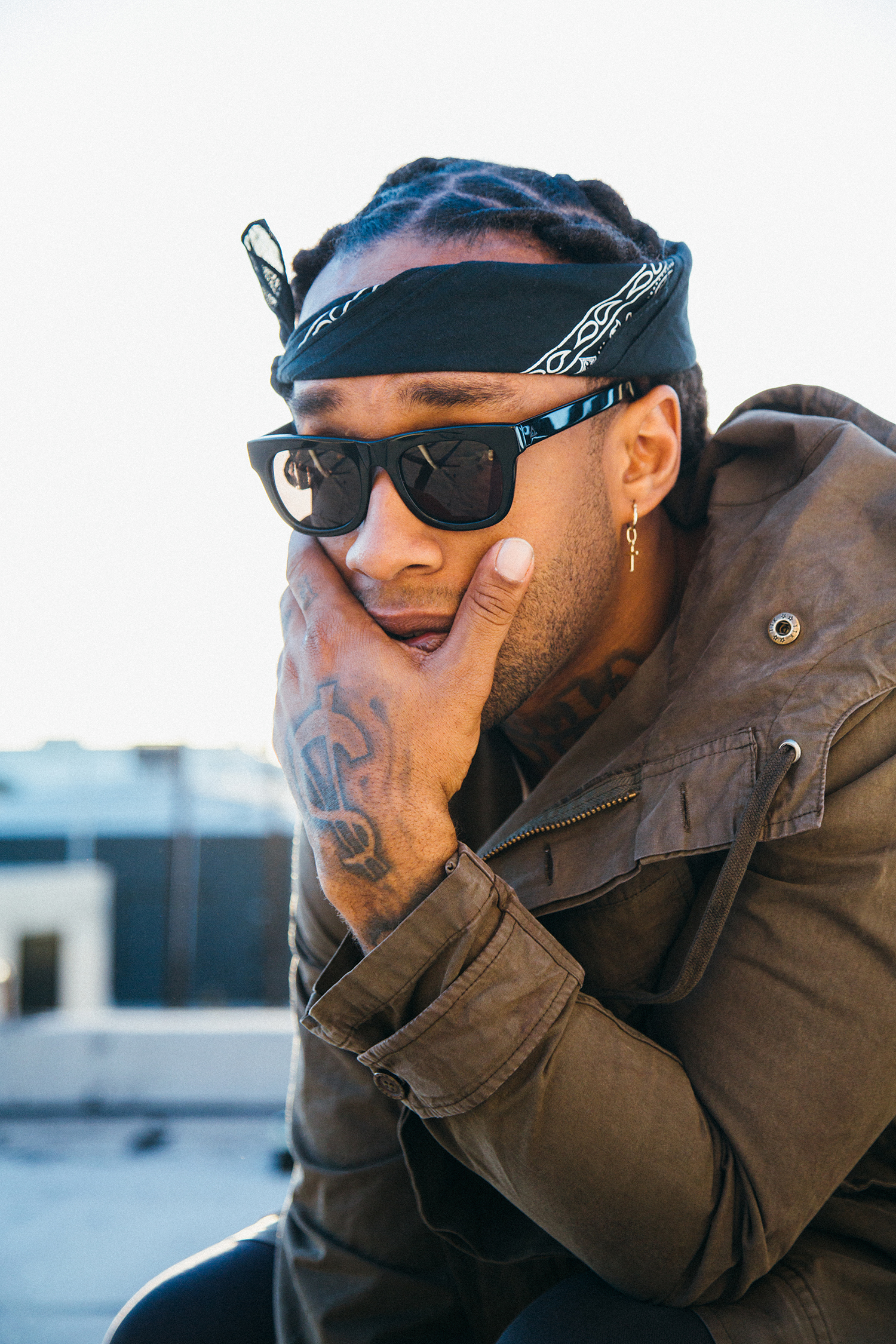 There are a lot of songs on Free TC that sound like Seventies funk.
Everyone can do what they want to do — I’m on some other shit. What I’ve always been about is new shit. When I put out “Toot It and Boot It,” did anything sound like that? If you put that on to this day in the club, everybody goes crazy to it: Nothing else sounds like it. Same thing with “Paranoid”: When I did that, nobody else was mixing the house [music] with the Mustard shit. Right after I put it out, you heard like 10 other people come out with the same thing. Watch what happens after this comes out: Everybody’s going to switch over. It’s all good.

“Paranoid,” that new song that Kanye teased during Fashion Week, “Bring It out of Me” on the new album — it seems like house music is important to you.
I love house. I’m definitely doing those records — I just came out on Carnage’s record; I’m going crazy on it. Me and Diplo just put out some shit. Hopefully I’ll work with Skrillex soon. If you go to the festivals, their concerts are popping. Why wouldn’t I want to get with that shit? Plus, I love it anyway.

You got famous for the ratchet R&B sound, but you’re already shifting styles — do you ever worry about losing your fanbase?
I’m never going to lose fans. They fuck with me. Before I was doing the ratchet shit, I came out with the Sa-Ra Creative Partners. I’ve been doing the other shit. I do all types of shit. Everyone that doesn’t fuck with me because I’m not doing one thing, then I don’t fuck with you either.

How do you feel about R&B as a genre right now?
There’s some cool people out there. I would love to see more — especially more singers that have skills. I don’t feel like people fuck with all the runs and [the] tedious moving through notes. People don’t fuck with that shit no more. People like the simple shit. It’s going to come back around. Everything has a cycle and a season. I’m glad to be a part of this season right here where people are finally fucking with my shit — I’ve been doing music for a while. I’ve always been me, and now everybody is able to be them.

What do you think changed that made that possible?
The Internet and everybody being able to see what’s really going on everywhere. The whole reason behind my album Free TC is seeing all that police brutality, injustice, mass incarceration. Now you get to see it, and I dedicated my whole album to it, and I want to make people aware of it even more so we can put a stop to it. Everybody’s able to get married now. That’s cool. There shouldn’t have been a problem with that. People are people. Everybody likes what they like.

Your single “Blasé” is climbing the charts.
As soon as I played the whole album for everybody at Atlantic, they were like, “‘Blasé,’ that shit’s fucking dope.” Every time I play it, there’s mosh pits and shit, people getting beat up. I don’t want people to get hurt — the energy of that song makes people want to fucking go crazy. When I perform it, I feel like some Bad Brains shit, new black punk.