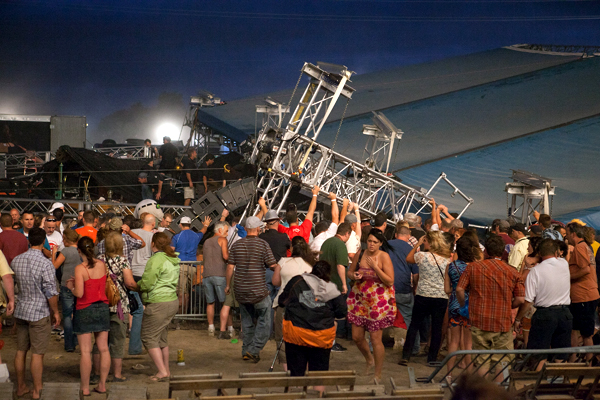 This summer’s tragic stage collapse at the Indiana State Fair prior to a Sugarland performance resulted in seven deaths and more than 50 injuries, but it apparently did not harm two local women who are being charged with faking injuries for profit.

On Tuesday, Marion County Prosecutor Terry Curry announced that Indianapolis residents Stephanie Murry, 25, and Sandra Hurn, 38, face charges for submitting false claims of injury stemming from the August 13th incident. The women attempted to extricate $22,500 from the Indiana State Fair Remembrance Fund and the Indiana Tort Claim Fund, which was reserved for the audience members injured prior to the country band Sugarland’s state fair performance.

Hurn and Murry allegedly began their scheme immediately following the deadly incident, but their stories did not match other eyewitness accounts; Hurn claimed that Sugarland had already taken the stage when it collapsed, which was inaccurate.

“I do not understand the mentality of someone who would look at the circumstances of that night and see the potential for financial profit from this kind of scheme,” Curry told The Indianapolis Star. “Most of us would look at those circumstances and feel sympathy and a desire to help assist the real victims in any way we could.”

The pair now face felony charges of forgery, perjury, theft and attempted theft. If convicted, Hurn could receive up to 36 years in prison; Murry could receive 14 years.