Afrojack on His Recipe for Creative Bliss - Rolling Stone
×
× 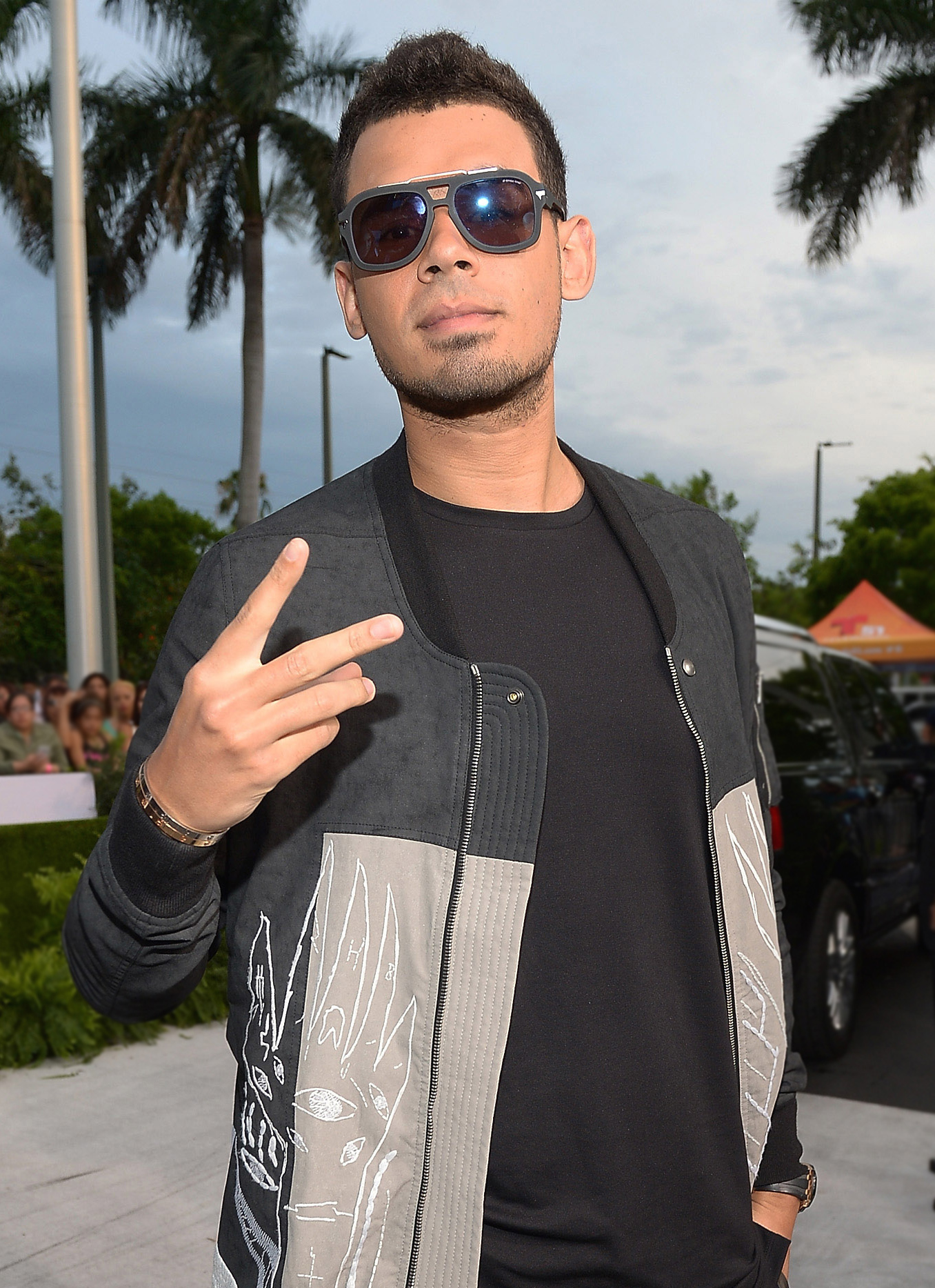 Afrojack‘s big hit of 2015 is “Hey Mama,” a chart-topping collaboration with David Guetta, Nicki Minaj and Bebe Rexha, but right now, he’s most excited about “SummerThing!” The new single, the first off an album due early next year, rides a peppy guitar line toward a cavernous drop that earns its exclamation point, then gets in line to do it again.

“SummerThing!” is a pop record, but according to Afrojack, it’s also a back-to-basics one. After negotiating his way through a surprisingly difficult first LP, the headstrong 27-year-old plans to follow his whims and create more of the uncanny sounds that originally drew him to DJ’ing. “No one ever believes me,” he says. “All I ever wanted to do was make music and play it for people. The essence is still the basics: Make songs, give them away and if people like it, that’s awesome.”

50 Most Important People in EDM

How did “SummerThing!” come about?
I was going for a fun summer song. I’ve been working on a lot of different styles of music, but I think this is the one that was closest to myself and great for a first single. After you’re done with your first album, you have to start a new cycle, and this is the single to get to another album, basically.

What did you learn from that first album cycle?
The music industry is — how do you say it? — a place with lots of illusions. It’s difficult to navigate your way through, but once you know the rules of everything, it’s just choosing for yourself what rules you want to accept and what rules you want to break. And since my music is already kind of edgy and different, I always try to handle myself the same way in the music industry. Not everyone always agrees with my opinions about speaking my mind, but I’d rather stay honest with myself and see what happens.

Having learned that, are you approaching this album differently?
Yeah. In the beginning I had so many people talking to me: “Maybe you should do this,” “Maybe you should do that,” “Blah blah blah.” Getting opinions thrown on you until you crumble into the ground. The first album, it was really difficult for me to have so many people and labels involved. It was a lot of pressure. Now, instead of what I did with the last album, accepting the pressure, I’m just choosing to ignore it and do whatever I feel is right. The main lesson I learned from my last album was trust your own instinct and follow your balls.

Where is your instinct taking you right now?
Right now the entire music scene around the world is really interesting. You have a lot of new genres and sounds popping up, and this is something I’ve always been interested in. So right now, the music I’m working on is not just about making great songs or making great club tracks; my main focus is to make a sound that is not describable. I want to use instruments where you’re unable to tell what it is. In “SummerThing!” when the beat drops in, I don’t know what to call those sounds, but they sound fun.

What genres and sounds are you inspired by currently?
The Skrillex sound, but more the hip-hop side of it. I started noticing more and more how the trap culture and all the hip-hop–trap-dubstep DJs — like Carnage and stuff — it’s starting to get louder and crazier but also better mixed and way better arranged. It has way more breathing room in it. I’m really getting excited about those sounds. I’m also really into the deep-house stuff. When I started off, I was a full-on techno DJ, and right now people are starting to understand the way this music works. It’s creating way more space to make different kinds of sounds. I am actually working on something right now which is almost a full-on deep-house song.

Have any songs particularly blown you away this year?
I really love the song that Skrillex did with Diplo, the Jack Ü song “Where Are Ü Now.” It’s so weird, but still it’s a cool song. It’s indescribable. Skrillex is one of the few artists in the world where every time I hear his shit I’m like, “What is this?” I saw his set at Ultra, and it was super amped. I’m good friends with Adam Russakoff, the guy that basically books all the DJs and runs all the legal stuff for Ultra, and he asked me who should close Ultra on the main stage on Sunday. I was like, “Dude, get Skrillex!” You have all these EDM DJs, a lot of them play the same stuff, but every time I saw Skrillex he always came with new shit.

Six or seven years ago, you were a young DJ in what was then one of those new genres, Dutch house. How did you transition from there to where you are now?
For me, it’s still exactly the same. I’m still trying to find new sounds. I’m still trying to constantly reinvent what I’m doing. And it’s difficult. After making “Take Over Control” a couple of years ago, everyone started to use the bleepy pitch sounds. I was like, “Ahh,” you know? “Should I try to do something else now that everybody is doing the same, or should I try to keep doing this?” Eventually, it was neither of the two. It was just sit in the studio and do whatever feels right.

I used to constantly be bothered by people copying my sounds or just other genres going totally different ways. I used to be completely engulfed by that and constantly focused on that. Now I’m just focused on doing whatever I want.

Do you think you’re happier with this attitude?
Oh, yeah. It’s the same attitude that got me started in the first place. Sometimes I wonder, like, “How the hell did I get myself into the stream?” In this life, it’s really easy to be sucked into the stream of what everyone is saying you should be doing and whatever society is doing.

You mentioned earlier that “SummerThing!” was close to who you are as an artist. What makes it so close?
Just its sound. For me, it’s a really safe sound. I’m used to doing drops and dance mixes, so for me this was a good start with a great song that Mike Taylor wrote. Also, speaking to the people that are true to their own culture, it really inspired me to stay close to myself. Same thing with “Hey Mama”: David had the song for a while, a really long while, and he didn’t know how to finish it. So when I got the song, I was like, “Well, what do you want?” And he says, “Just do you.” As you see, it worked out. There’s nothing better than to win with doing something that comes completely natural to you. Like, “OK, I’m just gonna follow my balls on this one,” and it worked out. That’s, like, awesome.

“There’s nothing better than to win with doing something that comes completely natural to you.”

What did you contribute specifically to “Hey Mama”? If you listen to the song, what are the Afrojack parts?
I did all the mixing and the pre-masterings but also all the beats, all the crazy sounds you hear. Especially during Nicki’s verse, when she starts rapping. All those weird sounds, that’s what I do. David is a great songwriter and great producer, and he’s also the one that taught me a long time ago about chords and chord progressions and how to make melodies and stuff. He’s just great at that. But I think my biggest contribution was the beats, making it street.

He also seems like someone who has reinvented himself and kept moving forward.
Yeah, I was in the studio with him last week for like five days, and he played me some new stuff of his, and it was really surprising to see how he just follows his heart with what genre he wants to do. He doesn’t care what people expect of him; he just cares about what he expects of himself and what he wants to make. It’s good to be around these kinds of people. It really helps a lot for your own well-being.

Popular comedians sometimes complain that they have trouble testing new material because their fans will laugh at anything they say. Do you ever have the equivalent problem with your music?
Not at all. My fans are brutally honest. When I do something that they don’t like, they’re like, “Hey, what is this?” It rarely happens when I make a new style of music, but when I make something that’s similar to something older I did, then the fans get pissed off [laughs]. They’re like, “Yo man, what’s this? It’s the same music that you’re doing again.”

Does that put pressure on you?
I don’t really see it as a pressure. I see it more as if you’re leading your own little community, and it’s your responsibility to provide them with new music and make them proud of you. It’s an inspiration. When I’m working in the studio, I always have Twitter on in the background, just so I continuously get inspired by whatever my fans are doing, what they’re saying, the conversations that I’m having. I’m more on Twitter to read the mentions than to read the people I follow.

That seems like it would be a distraction.
I like it. I like to have my crew around me. Also when I’m working in the studio, I usually have all the DJs and artists that I’ve signed, and I say “Come by, come hang.” It just gets me really amped up and really hyped up that I know that everyone around me is creating new music. It makes music comes to life. The most inspiring thing is to be surrounded by life, be it through the internet or people around you.