Nearing the end of his set on Friday night at the Chicago Theatre, Trey Anastasio took a moment to smile, glanced at his seven-piece backing band as if to say “It’s on,” and erupted into a jazz-inflected take on the Charlie Daniels Band’s apocalyptic country-stomping classic “The Devil Went Down to Georgia.” It was the second night of the Phish frontman’s tour in support of his recently-released solo effort, Traveler, and all his moves – from his decision to offer up nuanced takes on Phish classics like “Gotta Jibboo” and “Sand,” to the more noticeably refined nature of new album cuts like “Corona” and “Frost” – reflected a musician eager to walk outside the confines of his already notoriously-loose rock outfit.

What the Trey Anastasio Band – as the guitarist dubs his touring ensemble, which includes bassist Tony Markellis, drummer Russ Lawton, percussionist Cyro Baptista, keyboardist Ray Paczkowski, and a horn section consisting of Jennifer Hartswick, Natalie Cressman and James Casey – offers the Vermont native is an outlet: namely to push the boundaries of pop music, dive deeper into his love of jazz and rely less heavily on endorphin-releasing jam mayhem to sell his shtick. At times, this approach had the 48-year-old opting to revive Phish deep-cuts, like the salsa-tinged “Magilla” off 1992’s A Picture of Nectar, a tune normally melodramatic in concert, but fitting quite snugly here. During the evening’s encore, generally a site for over-the-top whammy-bar gymnastics, Anastasio did his best no-nonsense rock face, ending the show with Traveler’s chugging, rock-steady title track. 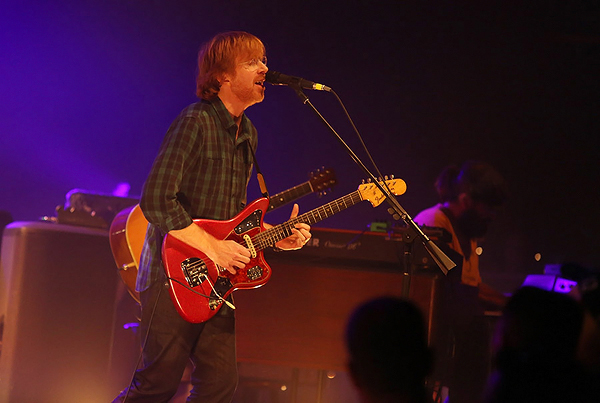 If anything, it’s Anastasio’s adept musical counterparts that keep his “solo” show grounded, rather than leaving it resembling yet another of the ADD instrumentalist’s various musical dirges. (Anastasio is also currently scoring a Broadway play and this past spring he played with full orchestral accompaniment.) On Friday, his horn trio shone brightest: saxophonist Casey, the newest member of the band, provided some of the night’s best soloing, particularly during “Burlap Sack and Pumps” and the always-rollicking “Push On ‘Til The Day”;  trumpeter Jennifer Hartswick, for her part, delivered an evening highlight with her saucy, blues-drenched vocals during a woozy cover of the Gorillaz’ “Clint Eastwood,” one of the tracks from Traveler.

Still, the audience, composed almost entirely of fans of the guitarist’s more famous band, yearned for those blissful moments where Anastasio wields his hollow-body electric guitar like a gun and fires off ear-rattling, arpeggio-laden solos. Never one to disappoint, the guitarist willingly obliged, unspooling  the rapid-fire flamenco relish of Phish’s Farmhouse-instrumental shimmy “First Tube” to rapturous delight, proving that even the most daring and exploratory musicians know when best to draw from their bag of time-tested tricks. 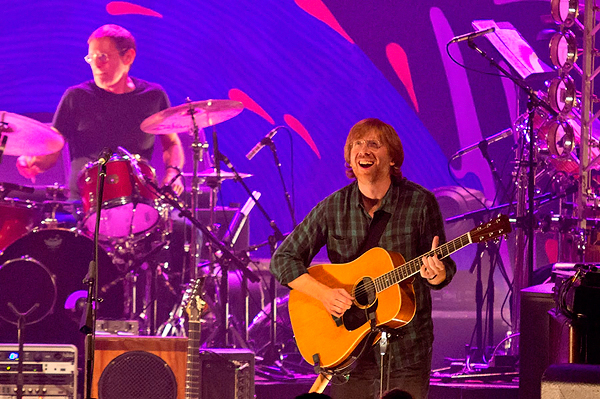