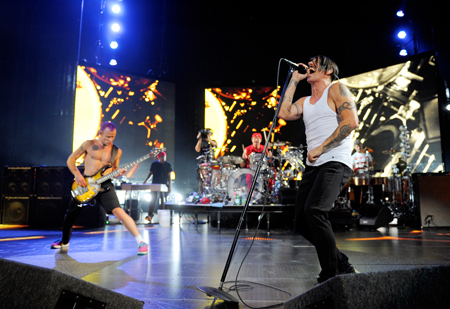 Red Hot Chili Peppers
Red Hot Chili Peppers, currently touring Europe, will launch the North American leg of their I’m With You World Tour in January. Tickets for the six shows listed below will go on sale on December 3rd, with more shows slated to be announced in the coming weeks. The tour will be the band’s first full-scale tour of the U.S. in five years, since they promoted 2006’s Stadium Arcadium.

Justice
French eccentrics Justice come to North America this spring in support of their new album Audio, Video, Disco. The duo will give Stateside fans a taste of their new sound, which Rolling Stone called “Seventies-style arena rock.” Get ready for some power chords.

Laura Marling
21-year old English troubadour Laura Marling just released her third album A Creature I Don’t Know, which has garnered the most enthusiastic reviews of her career. Marling will be touring the States for the upcoming holidays, starting in Minneapolis and ending in NYC with a double show.

*There will be two performances on these dates

Avey Tare
Animal Collective‘s Avey Tare hits the road across the country before year’s end, and will tour in support of his solo debut from last year, Down There. No doubt his performances will be full of his solo work, but as the primary songwriter of Animal Collective, don’t be shocked if a few classics slip into the sets.

Grimes
Montreal’s 23-year-old Claire Boucher — aka Grimes — produces a light, bouncy sound that somehow, probably due to her haunting falsetto, feels dark and even at times uncomfortable. The singer/producer takes her acclaimed sound to the road next year for a healthy amount of tour dates, kicking off in Vancouver.