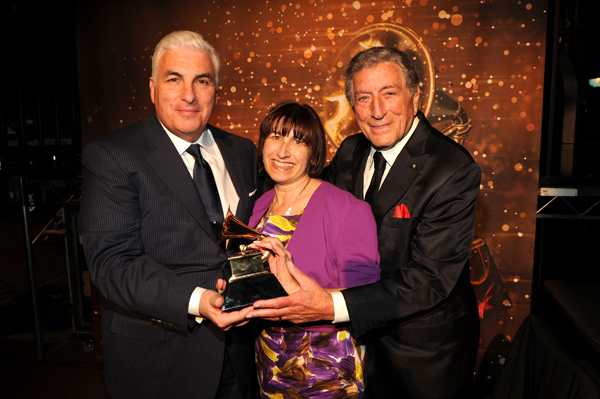 Tony Bennett took home two more Grammy Awards last night, including one for his achingly romantic duet with the late Amy Winehouse on “Body and Soul.” That brings his career total to 17 Grammys, beginning with his first for 1962’s “I Left My Heart in San Francisco.” “I love it,” Bennett told Rolling Stone backstage at Staples Center in Los Angeles. “Winning just feels great.”

When he won with “Body and Soul” for Best Pop Performance by a Duo or Group during the pre-broadcast portion of the show, he invited Winehouse’s parents to the stage with him. “Body and Soul,” from Bennett’s Duets II album, was Winehouse’s last known recording.

“We shouldn’t be here. Our darling daughter should be here. But these are the cards that were dealt,” Mitch Winehouse said on stage about the late singer, who died at 27 after years of struggle with drugs and alcohol.

It was an ongoing theme of the weekend. Bennett made some waves Saturday night at Clive Davis’s annual pre-Grammys party, which became a memorial for Whitney Houston after the singer was found dead in her hotel room hours earlier. On stage, Bennett called for drug legalization, stirring up instant reaction in the press and online.

“It was mostly positive,” Bennett said last night of the reaction to his comments, noting the struggles Houston had later in life. Legalization would “get rid of all the gangsters that make people hide. One thing I’ve learned about young people, when you say ‘Don’t do this,’ that’s the one thing they’re going to try and do. Once it’s legal and everybody can do it, there is no longer the desire to do something that nobody else can do.

“I witnessed that in Amsterdam,” added Bennett, 85, who survived his own cocaine habit in the late Seventies. “It’s legal, and as a result there’s no panic in the streets. There’s no deals, there’s no ‘Meet me at the corner and I’ll give you something.’ You’re always afraid you’re going to get arrested. You have to hide. Why do that?”

Though he never knew Houston, he remembered his first reaction to hearing her voice in the mid-Eighties. “When I first heard her sing, I called Clive Davis up,” he said of the label chief, who discovered Houston and nurtured her career. “And I said, ‘Clive, that’s the best singer I ever heard in my life. You really got something on your hands.’ Sure enough, at the beginning she was singing everything so beautiful.

“She just had the gift. Singers know other singers when they hear it. They say, ‘Wait a minute, this is different.’ She had that wonderful gift of believing everything she sang.”

Bennett is also a fan of this year’s big winner, Adele, who won six Grammys last night, including Album of the Year. He compared her to Kate Smith, an American singer with a big voice from a much earlier era. “She’s magnificent,” he said of Adele. “She’s the best British singer I ever heard.”