Thousands of Cranberries fans lined up outside of a Limerick, Ireland church – where Dolores O’Riordan was lying in repose ahead of her funeral Tuesday – to pay tribute to the singer who died Monday at the age of 46.

According to the Irish Times, fans congregated outside of St Joseph’s Church Sunday, the first public viewing since O’Riordan’s death on January 15th; earlier in the week, a London coroner announced they had released the singer’s body back to her family after conducting an autopsy, the results of which will be revealed no earlier than April.

Inside the church, Cranberries songs played quietly as fans entered during the four-hour viewing. A floral tribute – from the singer’s Cranberries band mates – next to O’Riordan’s coffin was inscribed with an homage to one of the band’s biggest hits, “The song has ended, but the memories linger on.”

The coffin was also lined with photographs of the “deeply religious” singer performing onstage as well as two pictures of O’Riordan meeting the late Pope John Paul II at the Vatican.

“We come to offer a heartfelt greeting to a deeply loved and cherished daughter of Limerick. As we file past her coffin, let’s pray for her, her family and those she loved and helped in life,” Bishop of Limerick Brendan Leahy told mourners Sunday. “I am conscious that, while millions across the world have been shocked by the sad news of her death, today is about Limerick’s public moment to bid farewell.” 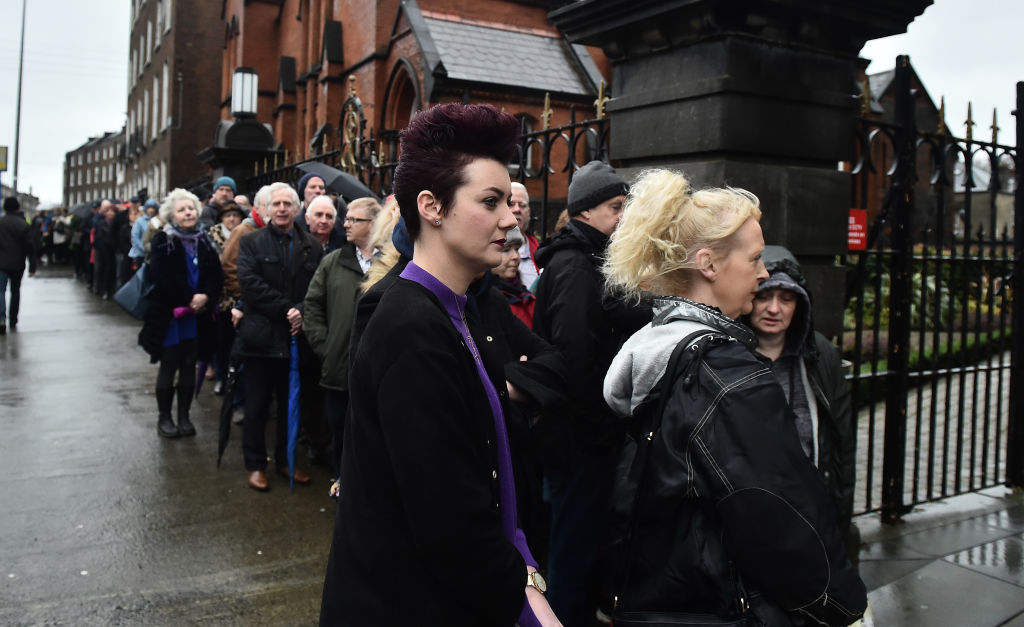 The public viewing in Limerick, O’Riordan’s home city, concludes Sunday afternoon, at which point the coffin will be relocated to a funeral home in nearby Ballyneety for another public viewing before she is laid to rest Tuesday at St Ailbes’ Church in Ballybricken, BBC reports.

While the funeral service itself is open to the public – and will be broadcast on Irish radio – only family will attend the private burial. The Irish Times added that O’Riordan would likely be buried next to her late father Terry, who died in 2011.