As an upbeat, largely positive music writer, I’m not above feeling occasional twinges of insecurity about whether…well, whether…I’m losing it!

Which is just one major reason I‘m so grateful today’s social media scene keeps me on my toes!

So I’d like to take this opportunity to thank reader Grant Haygood, who, courtesy of Twitter, this week noted: “@DaveDiMartino Your snarky cynicism really bummed me out. Try smoking a bowl before listening to new music, dude.”

So Grant, please be advised: After grinding the bowl down to smokeable particles, I could only withstand one or two puffs before nearly losing consciousness! And I only use the finest Tupperware at my house! Your advice sucks! 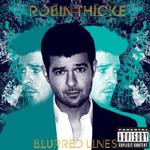 Robin Thicke: Blurred Lines (Star Trak/Interscope) I couldn’t be happier for young Robin Thicke, who through persistence, good connections, and a voice that rivals the Gibbs themselves for falsetto pureness, now appears to have reached his commercial zenith via his “Blurred Lines” hit! A talented, good-hearted fellow who has pursued his muse wherever it might lead him, Thicke now perhaps inadvertently seems to be exploring those R&B regions once pioneered by Marvin Gaye post-What’s Going On—not so much Let’s Get It On as the Leon Ware-penned 1976 set I Want You, and the underrated Ware sets that would follow soon after. Upbeat, topical, sexy, and always featuring random nudity—a surefire recipe for success!—Thicke has crafted the finest album of his career, which, as its cover picture indicates, has him as stumped as everybody else! Perhaps the irony of his last name has, finally, hit him! Isn’t it about time? 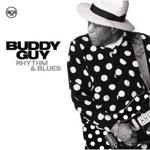 Buddy Guy: Rhythm & Blues (RCA) Something of a spectacular showing for blues legend Buddy Guy, whose guitar prowess has never been less than daunting, but whose various entries into the pop music market have always been slightly tainted by his essential bluesiness: He just hasn’t seem like the sort who’d be looking for a hit record! Yet this 2-CD set, featuring guest appearances by Kid Rock, Keith Urban, Beth Hart, Gary Clark, Jr. and some Aerosmith clowns, while appearing to be precisely the sort of sell-out move some among us might’ve feared, might just get him there! With prime playing, covers of immortal tracks like his Kid Rockified “Messin’ With The Kid,” and the radio-ready “Meet Me In Chicago”—which sounds like a perfectly crafted, rowdy rock hit uniquely colored via its presence of a 76-year-old vocalist—Rhythm & Blues seems like a polished, respectable set that may indeed catapult Mr. Guy into the same vaunted celebrity stratosphere as Ke$ha, Psy, and other artists whose work has no artistic merit whatsoever but are cultural curios! This is pretty good, though!

Five Finger Death Punch: The Wrong Side Of Heaven & The Righteous Side Of Hell, Vol. 1 (Prospect Park) As their bio clearly states, “Everyone has two choices—evolve or die.” I choose to evolve! You too? As such, rather than sitting back and merely digging the hard-rockin’ joys of this colorful Las Vegas quintet, I’m gonna ask the hard questions, such as: If this is only the “First installment” of The Wrong Side Of Heaven & The Righteous Side Of Hell Vol. 1, does that mean the next installment will still be part of Vol. 1? Will there be even more installments for Vols. 2, 3, and, hopefully, 4? Further, is it true that the band got its name from the cartoon dude that kept singing “fruit juicy Hawaiian Punch” while wearing that dopey hat? Finally, when your opening track “Lift Me Up” features a guest appearance by Rob Halford of Judas Priest, why not quit while you’re ahead and spend the remaining 13 tracks explaining how, at least in the case of your band name, the thumb actually counts as a finger, and all those literalist detractors are completely missing the point! 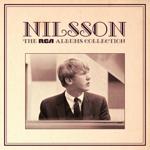 Nilsson: The RCA Albums Collection (RCA Legacy) “Reviewing records” tends to be a humorous notion when the records in discussion include the nearly complete works of the marvelous Harry Nilsson, whose catalog is among pop music’s most distinguished, and whose very finest works and much more are celebrated here. Were he never to have recorded anything but his first two RCA sets—1967’s Pandemonium Shadow Show and 1968’s Aerial Ballet—he’d still be just as legendary, but throw in the masterful remix reworking of 1971’s Aerial Pandemonium Ballet, his very own hit records from Nilsson Schmilsson, and his famed association (and collaboration) with John Lennon, evidenced here by 1974’s Pussy Cats, and a writing and singing talent that to this day is unapproachable, and you’ve got the makings of a still under-appreciated pop music icon. This set takes care of all of that and more: Largely complete (it’s missing some early stuff, the tunes from the Popeye soundtrack and a few other rarities), it’s oozing with substance, adventure, and the sort of artistic boldness we rarely see this far into the 21st Century, and is completely worth your owning, memorizing, and treasuring. He was a remarkable talent, and these discs—17 in all—certainly prove that. 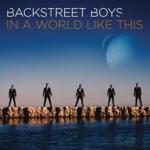 Backstreet Boys: In A World Like This (K-Bahn) While few of us expected former teen-pop sensations the Backstreet Boys to be making records well into 2013, even fewer, I suspect, imagined they’d devote them to admittedly far-out science fiction concepts as trans-dimensional space travel, telekinesis, interaction with the spiritual plane, and unexpectedly being kidnapped from Earth by evil aliens and being transported to Saturn! Their first album since the Big Move, In A World Like This bares it all: Their confusion about needing no spacesuits or oxygen masks, their lack of desire for food, sexual gratification or large-screen televisions, and their alien captors’ desire for them all to wear the same clothes and only be photographed from a distance! But the tunes? They rock! I like them all—and by the time near-closer “Feels Like Home” comes ‘round, I’m thinking the colorful combo may well have reached their artistic zenith! I’m also thinking of going out and getting some lunch, but some stuff you should keep to yourself! 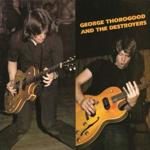 George Thorogood & The Destroyers: George Thorogood & The Destroyers and Move It On Over (both Rounder) To the slightly younger generation who perhaps first experienced George Thorogood as a character in his “Bad To The Bone” video of 1982, it may difficult to imagine him an even younger, exploratory blues-dude electrifying his adopted genre in a sexy, sleazy and sloppily bar-bandish way—but lo, this was true, and here’s the evidence. The rocking Delewarian—damn, is that a word? It should be!–introduced himself and his rocking combo via this set of Rounder discs, first issued in 1977 and 1978, back when record stores had such things as “New Wave” bins and Thorogood was often as not piled in there along with the Cars, Dr. Feelgood and punk legends the Hooters! Rootsy, energized, and with absolutely no fantasies of the rock stardom such things as MTV would provide, George & co. were much like the American Groundhogs, covering the giants, sweating a lot, and allowing pretty girls to buy them beers after their third and fourth sets! Frankly, it all sounds great! 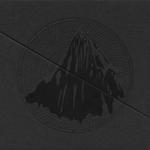 Various Artists: Erased Tapes Collection V (Erased Tapes UK import ) Anyone interested in compelling new music that quite deliberately defies genre—Is it classical? Is it jazz? Is it pop? Is it that sort of weird mixture Cherry Red Records used to celebrate 30 years ago?—should be completely enthralled by this limited edition set, apparently geared to be released by year’s end, but conceptually stunning even now. Featuring 10 exclusive tracks by such artists as Nils Frahm, Peter Broderick, Ólafur Arnalds, and A Winged Victory For The Sullen, the collection celebrates the unique aesthetic approach taken by the fascinating Erased Tapes label, offers them up in a variety of configurations, all noted here , and, for those who deeply enjoy music, will likely make you feel very good about liking it so much. All wonderful, subtle stuff, equally enjoyable on the physical and emotional level, and the sort of thing that occurs, on occasion, despite rather than because of the peculiarities of the record industry. Highly recommended and much worth seeking out. 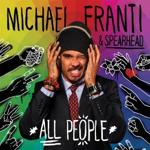 Michael Franti & Spearhead: All People (Capitol) Somewhere in the past 25 years, in the mix of multi-genre artist types who ended up appealing to rock/hip-hop/R&B fans and found a live following in the world of the H.O.R.D.E. tours, Bonnaroo, emerged the quite talented Michael Franti. Whether through his early bands the Beatnigs, the Disposable Heroes Of Hiphoprisy or his very own Spearhead—the “current” name for nearly 20 years—Franti has been pioneering emotionally-charged, often politically-driven material that resonates deeply with his fans, who significantly are growing rather than reducing in number. His latest set is quite good, sing-songy in a good way, and laden with catchy songs that are likely to sound even better in a live environment. There are very few artists doing what he’s doing—and what he’s doing is better than you might imagine, if you haven’t checked lately. See for yourself, and prepare to be captivated.

Tonto’s Expanding Head Band: Zero Time (Real Gone Music) Anyone who bought records in 1971 knew that jazzman Herbie Mann’s Embryo label was, as they say, a very mixed bag. Two of its highlights was the bizarre classic The Fifth Word by Novac—in my world an absolute drug-charged masterpiece—and this introductory piece by Tonto’s Expanding Head Band, a far-reaching synth showcase by Malcolm Cecil and Robert Margouleff, very much ahead of its time and still sounding fabulous all these years later. “Tonto”—short for The Original New Timbral Orchestra—was all hands-on back then, way before sequencers and buttons allowed one person to create a wall of music with merely a hand gesture, and the work and craftsmanship on display shows a dogged determination to create music rather than a pure effects show, which is why this aged document still excels. Best of all: haunting closing track “Tama,” which still, after all these years, blows what’s left of my digitized mind. Maybe yours, too.