'The Voice' Season 2 Recap: The Search Is On for the Next Big Thing - Rolling Stone
×
× 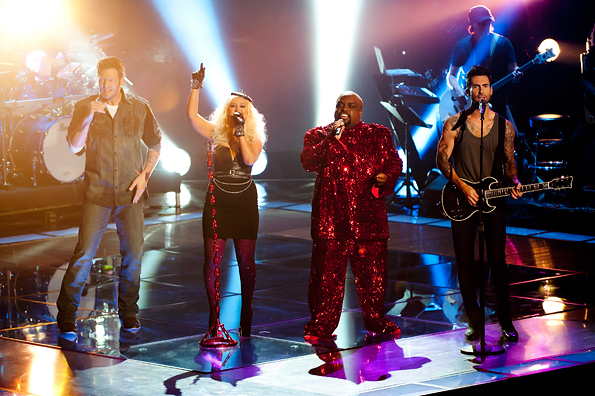 What is your favorite reality singing competition? It’s entirely possible you wouldn’t know off the top of your head anymore. Is it that old war horse American Idol, the brand new and soon-to-be-drastically-retooled X Factor, or perhaps it’s (God help you) The Singing Bee? Then again, maybe it’s The Voice, which returned for its second season immediately following the Super Bowl and struck ratings gold, which is famously more difficult to come by than actual gold.

A big difference between this show and the others is that rather than hold open auditions, The Voice sends out invitations to certain known vocal quantities who then come in for blind auditions. That means no exaggeratedly bad fruitcakes walking in from the street trying to make a fool of themselves on national TV. To a certain extent, I do indeed miss those fruitcakes, but by now, not encouraging people to embarrass themselves for our Roman gladiatorial amusement practically passes for a virtue.

The introduction to the show (generously) calls the judges “four of the biggest stars on the planet.” The flattery train keeps on rolling too, when Christina Aguilera is said to be “widely regarded as one of the best voices of all time.” Judging by her outfit in the season premiere, however, she currently wants to be widely regarded as Boobs McGee.

You know the premise of the show, with its spinning chairs and Carson Dalytron hosting apparatus. There’s a lot of ground to cover in the first two episodes, so let’s dive in.

Farm girl RaeLynn is up first, singing a song by country star judge Blake Shelton’s country star wife Miranda Lambert. We will be hearing a lot about her. RaeLynn has a feisty voice with some solid twang in it, and she wears a bright red flower in her blond locks. Adam and Blake are enchanted by what they hear, and turn around immediately. Christina Aguilera does what I soon realize is her signature move of almost pressing the button that turns her chair around, letting her hand linger there for a while and then withdrawing it. “I’ll make you a country star,” Blake promises. “Why would you want to be just a country star when you could be bigger than that?” Adam asks poignantly. RaeLynn ends up choosing Blake.

Although the auditions episodes are kind of low stakes – it’s hard to imagine any of these judges getting worked up into a frothy lather about whether the farm girl chooses them or not – it’s fun to see them act as though there’s a lot on the line. Regardless of whether their hearts are really invested in this, the judges constantly zing each other trying to win over the contestants, and it’s entertaining enough not to matter terribly.

The first sob story of the season belongs to the second contestant, one Jesse Campbell. He is a single father whose wife left him because of his propensity for musical pursuits (such as auditioning for The Voice). He’s got a soft, expressive voice and sad eyes. Immediately everyone except for Blake turns around. A moment later he does too. (“I realized I was the only dumbass in the room missing the show.”) “Ah man, you touch me deep down,” Cee-Lo says. He is incapable of saying anything that doesn’t sound at least somewhat sexual.

“I was feeling the soul too,” Xtina says, “even though I’m not the same color as Cee-Lo.” I’ll give you two guess whether Cee Lo responds by saying that we are all the same color when the lights go out. Eventually Jesse chooses Xtina.

After witnessing the sadness extravaganza of an overweight boy in a bow tie unable to force one chair to turn around, we meet Juliette Simms, the rocker crush you were too scared to talk to in high school. With her face set to “snarl,” Juliette rips through an unusual take on the Beatles’ “Oh Darlin,'” with some bite to her voice. Everyone except Blake turns around. Xtina seems determined to take Adam Levine down several pegs here, referring to him as a) a car salesman, b) a Justin Timberlake wannabe, and c) someone who needs a lot of attention. Xtina calling somebody out for needing attention is like the pot calling the kettle a pot, though. Cee Lo, of course, attributes these two judges’ weird mojo to sexual tension, and then wins Juliette over, somehow, with this line: “Baby, I am so thoroughly impressed and in awe of you. You turn me on.”

Episode 2 of the blind auditions starts with a bang. If you’re going to have “four of the biggest stars on the planet” as your judges, then they will have to make with the singing and the dancing at some point. Here, it’s a Prince medley that involves fun costume changes, such as the giant red sparkling onesie Cee-Lo wears during his “Little Red Corvette.” Well, it’s not as though he didn’t warn us he was freaky.

The auditions begin with a Nashville duo called the Line harmonizing on Tom Petty’s “American Girl.” Everyone except Adam pushes their button. Christina continues settling into her role as antagonist here, going after obvious choice Blake Shelton. “You know, Blake, last year . . . he had a duet, and he ended up sending them home,” she says. Blake defends himself, by mentioning wifey Miranda Lambert again . . . and gets called out on it this time. (“Will you stop using your wife to sell these people?” Adam says.) The Line ends up choosing Xtina, who laughs at the other judges menacingly in response.

Later in the episode, 37-year old Gwen Sebastian has a quietly moving story that stands out among the poignant tearjerkers, such as HIV-positive former meth addict Jamar Rogers. Gwen’s story is that she’s letting go of having kids in order to pursue a music career. Adam, Cee Lo, and Blake Shelton all turn around for her Sugarland cover. “You know what you’re doing,” Blake says. “You have a full sound. You’re developed. Cee Lo has a different definition of the word developed.” Somehow, even when trying to be respectable here, Cee Lo still sounds sexually charged. “I just wanted to turn around and let you know you were appreciated.” Gwen picks Blake.

Adam can’t seem to convince anyone to be on his team this episode, and Xtina sees an opening to be villainous on that score. “How many is that for you, Adam?” she asks after he fails to snare Gwen Sebastian. “Don’t worry about it,” he says in a measured voice.

Kim Yarbrough is 50 years old, generously proportioned, and showing just about as much cleavage as Xtina. If “Tell Me Something Good” is a terrible song to audition with, Kim manages to get some personality across with it. Both Adam and Xtina turn around and say mildly racist remarks. Adam asks Kim’s name and she gives it. “No,” he says “Your name is Chaka Khan.” Then he goes on to tell the large, black woman with reams of curly hair that she is just what he was hoping to see when he turned around. I guess she’s flattered by this, because she chooses Adam. In your (increasingly Cyndi Lauper-esque) face, Xtina!

As a too-perfect counterpoint to Kim’s triumph, we also witness a sexy young performer named Pamela Rose sing a kinda weak version of Kelly Clarkson’s “Already Gone,” which earns her a one-way ticket back to whence she came. The judges blame it on Pamela’s pitch because that’s the only complaint they ever make about anyone ever.

Angie Johnson acquired some internet fame as a military singer when a YouTube clip of her singing “Rolling in the Deep” with her Air Force band got a million views last year. When she rocks out to “Heartbreaker,” Cee Lo spins around in his chair, smiling. Then briefly, The Voice turns into The Gong Show. “Are you as beautiful as I think you are?” he asks Angie. “Wait a minute, let me put on my reading glasses . . . ” he says, before whipping out a pair of “comically” oversized sunglasses. Wokka wokka.

“I started listening to experimental things like Radiohead and Incubus,” says Lindsey Pavao of her formative influences, immediately earning my ire. Her Skrillex haircut does her no favors either, but this is The Voice, after all, so we know what counts here. Lindsey captures everyone’s imagination except for Adam’s, with a lilting, purring vocal quality on the unusual audition choice of “Say Aah” by Trey Songz. “That’s probably the coolest thing that’s happened on the second season so far,” Cee Lo says. Blake pinpoints the Fiona Apple influence and compliments Lindsey’s hair.

“You have such a unique tone of voice. I don’t want to change that, I just want to play with you,” Xtina says. In case anyone didn’t catch the lesbian baiting in that sentence, she follows up with: “We’d have an amazing time experimenting.” Yikes.

Jermaine Paul is a muscle-bound backup singer for Alicia Keys, and he’s introduced wearing matching keffiyehs with his daughter. Before Jermaine takes the stage, Carson Daly shows him a video message Alicia Keys recorded for him. “Hi Jermaine, it’s Alicia Keys,” she says, in case Jermaine had double-amnesia and remembered neither who Alicia Keys is or the fact that they’ve worked together. His version of “Complicated” sounds alternately too gruff and too soft for my taste, but both Cee-Lo and Blake like it.

“With my back turned around, I could hear the swag,” Cee Lo says. “I’m glad I turned around, though, because I want you on my team.” What follows is a weird etymological discussion about the word “want,” during which Xtina keeps hitting the button to show that she is still around. Cee Lo concedes that he “needs” this contestant on his team, but Blake somehow convinces his “tall brother” Jermaine that they belong together.

The final contestant of the two-hour second episode is Angel Taylor, singing what we must grudgingly accept is quickly becoming a singing competition show standard, Adele’s “Someone Like You.” Angel manages to pull in Adam, Blake and Cee Lo. “That was a tough song choice. You started off nervous, and it wasn’t so great at the beginning,” Adam says, but then Blake cuts in. “I thought it was pretty good at the beginning.” More undercutting! Despite professing a massive crush on Blake Shelton, though, Angel ends up picking Adam, who happened to win the show last year, if you didn’t catch that.

Next week: I hope you’re not sick of blind auditions yet, because there are more on the way.