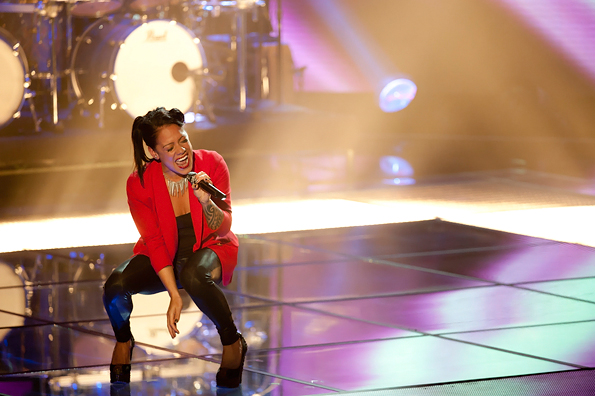 “It is definitely stiffer competition this year, and I think we’re all being that much more guarded and that much more picky,” Christina tells one of the blind auditions late in last night’s episode of The Voice. If there was a running theme to the episode, that was it. There were moments when the four judges, especially Adam Levine, seemed like your annoying vegan friend who can’t ever find anything to eat at any restaurant you visit. Or maybe the food was just mostly gross?

Each judge has 12 spots to fill, and though it doesn’t seem like anybody has a strategy, some patterns are beginning to emerge. Blake tends to choose country folk, and furthermore: duh. Adam has gone mostly for powerhouse vocalists. Christina seems fixated on diversity. And Cee Lo often goes for rockers or anyone dripping with personality. These patterns are based strictly on those contestants the judges have successfully “won,” which renders them basically meaningless considering the judges also bid on a lot of other contestants and lost. Hmm. It feels weird to talk about people like human chattel, but whatevs.

The first contestant is Sarah Golden and, oh boy, is there a dramatic build-up around her face. She talks about how she’d been signed twice before, but her looks rendered her unmarketable. In interviews, her face is blacked out; when she’s walking toward the stage, it is blurred out. We have no choice but to assume deformity. When we finally do get to see Sarah – only after Cee Lo buzzes his chair midway through her solid take on Lady Gaga’s “You and I” – she has a totally normal face. Maybe a bit boyish and round, but by no means noticeably flawed. So was this a fakeout by the show’s producers, or is this what “TV-ugly” looks like? Either way, my indignant sense is tingling. Adding to the depressing nature of this moment, Sarah is the first female contestant Cee Lo doesn’t aggressively flirt with. She ends up choosing him to be her coach anyway.

Elley Duhe is a 19-year-old with a County Fair JonBenet vibe. Incredibly, her father, a teacher, encouraged her to drop out of high school in her senior year to pursue a singing career – a move I call “Operation: Whoops.” Elley is a bit “pitchy,” as they say, and is done no favors by a particularly toothless instrumental track of Duffy’s “Mercy.” No judge presses a button for her, but she seems to have the best attitude of any losing contestant yet. Keep plugging away, Elley! Or go back to school!

Next up is a 19-year old boy named Pip, who is immodestly babyfaced, with suspenders and a bow tie to match. He also has a mature and very theatrical voice, which he flexes on “House of the Rising Sun.” Adam is first to press his button, then Blake, followed by the other two judges. Blake asks Pip how he’d like to be the one male in his all-female henhouse so far, which seems like the wrong way to go about this. “I’ve got time and attention,” Christina counters. “When she wakes before noon she has time and attention,” Blake says. Ultimately, Pip chooses Adam, which causes Christina to slag off Adam as a salesman. Really, he’s no more unctuous than any other judge.

Erin Willett is another of the sob-story contestants, and I’m a little frightened to see how hers will play out over the course of the show. Her father, the man who taught her how to sing, has pancreatic cancer, but he still came out to watch her sing “Give Me One More Chance” with a bold, powerful voice. The only person who presses is Blake, but that’s all she needs to make it on the show. I truly hope her father makes it through the season.

Big, hulking football guy David Grace does a precisely adequate cover of “Sweet Home Alabama,” and the judges are unmoved. Afterward, Xtina does that thing where she recuses herself from not choosing him by explaining she was trying to get the other judges to do so. There’s something so sad when a contestant who doesn’t make it on the show finally gets backstage, and the family is all like, “Hey, Champ, you did great!”

Katrina Parker gets a personal invitation to be on the show from Carson Daly, who comes to her office. It’s a little gross, though, that every singing competition show demonizes the day jobs these contestants have, despite having an audience comprised of people with similar jobs. (THESE POOR PEOPLE WITH THEIR TERRIBLE LIVES, JUST LIKE YOURS!) Katrina’s raspy version of Joan Osborne’s “One of Us” makes an impression on Adam, though, and he picks her.

Former kickboxer Jeff McBride wears sunglasses indoors, not to curry favor with bespectacled Cee Lo, but because he had his retina scratched when someone put a thumb in his eye in seventh grade. Jeff’s a skinny baldheaded dude who resembles Robert Townsend. Christina buzzes in early on his committed performance of “Higher Ground.” Just like last week, though, we once again witness Christina promising a black dude, “I may not look like Cee Lo, but I’ve got soul too.” “Everybody know you’ve got soul, girl,” Cee Lo says diplomatically. “I had one person in mind, and right now it’s Christina,” Jeff says, which makes no sense when you dissect the statement, but good for Jeff.

Erin Martin is an interesting case. She’s absolutely gorgeous, which she claims counts against her since nobody takes her music seriously. She defines her own look as “Egyptian warrior princess,” which is no fun because it’s my job to come up with descriptions like that for her headband and necklace. Her voice sounds like Norah Jones multiplied by the power of Bjork, but it seems rather forced, like she aspires for uniqueness. At times, the affect really shows, and she drifts into babytalk. Everyone but Adam presses their button. “You look like a wonderful creature of a woman,” Cee Lo says to her. “And your voice is so great and unique and bizarre and great.” Blake also goes on about her unique voice, but she chooses Cee Lo. The victorious judge then delivers a strange James Bond villain monologue to the camera while stroking a cat: “I think it was fate that we meet. She was given to me. I deserve her.”

James Massone is a golden-throated 23-year old who works in a body shop with his family in Boston. He sounds like Good Will Hunting and looks like he’s 12. He also has a very confusing story about four rappers getting gunned down once upon a time. He’s tangentially involved, but it changed his life forever? I don’t know. Adam’s the only one who doesn’t turn around during James’ sterling take on “Find Your Love.” The boy’s own impressive showing makes him cry, adorably. Luckily some more casual racism follows. “He’s white!” Adam exclaims, with mock-shock. “Yeah, but he’s got soul,” Christina says. Oh, boy. (Why is “soul” a code word for “audio blackness”?) James eventually chooses Cee Lo, who is starting to get a full dance card.

Winter Rae waits tables at a bowling alley and is happy with her job, because they let her look the way she looks, which is: asymmetrically shaven blue pixie cut, neck tattoos and thigh-high boots. She seems like a perfect contestant for the show, but she falters in two ways – by bringing along a human name-drop (Perez Hilton), and asking the audience for a round of applause as her song starts. The judges probably didn’t like that. Nobody turns around. “I loved your soul!” Christina says afterward, confusing me further.

Chris Cauley gets points right out of the gate for naming his bluegrass-artist grandma as his number one influence. “She’s like June Carter, a real sweetness in her voice,” Carson Daly observes of her, accurately. Chris sings a gritty but pitch-perfect “Grenade,” during which Adam looks conflicted and upset. He finally turns his chair, long after Cee Lo has already done so. Adam explains why it took him so long to turn around: he wanted to be sure, and after one perfectly executed falsetto note, he knew. Chris chooses Adam.

The final contestant is Jordis Unga, who comes from intriguing stock. Her dad is Tongan; mom is Swedish. He’s wearing flower-laden tribal garb; she’s wearing leopard print. Jordis doesn’t look more like one parent than the other – she’s got big eyes, and a bigger smile. She totally sticks to the script on “Maybe I’m Amazed” and really brings down the house. Everyone turns around except Adam. The celebration dance Jordis’ dad does in his flowy muumuu after she wins is the best thing I’ve ever seen! Watching the three judges compete over her is easily the most exciting part of the show. “I picked you,” Cee Lo says, underselling. “I picked you. Simple.” Blake flatters her: “You’re the type of voice I’ve been waiting for. Your voice makes me want to push myself to be better as a singer.” Christina mentions again that she has time and attention to give, and suggests that unlike Cee Lo, she won’t be out touring. This prompts Blake to mentions that he took the winner from his team last year on tour with him. Ultimately, though, Jordis says she picked Blake because he pressed his button first. Fair enough!

Next week: Even more blind auditions? How is that possible?