The National played three shows in small New York clubs yesterday, celebrating the release of their sixth album, Trouble Will Find Me, in unique style.

The first venue, announced on Twitter, was a tiny bar (and flower shop) in Ditmas, Brooklyn, called Sycamore. (“Care to to join us for a liquid lunch? Doors at noon, show at 12:30,” the band posted on Facebook.) The second was at Public Assembly in Brooklyn, at 5 p.m., for which tickets were raffled to fans online. The third, at 10 p.m., was at Manhattan’s Mercury Lounge, a 250-capacity club where the National performed in their early days.

For a band whose upcoming tour will make stops at venues with 2,000-plus capacities, the National seemed to be hankering for their club days. At Mercury Lounge, singer Matt Berninger said, “The first time we played here, it was a huge deal for us. This venue means more to us than any in the world.” The band also joked that the club “lost a lot of money” on them over the years, “back when we were legit.” 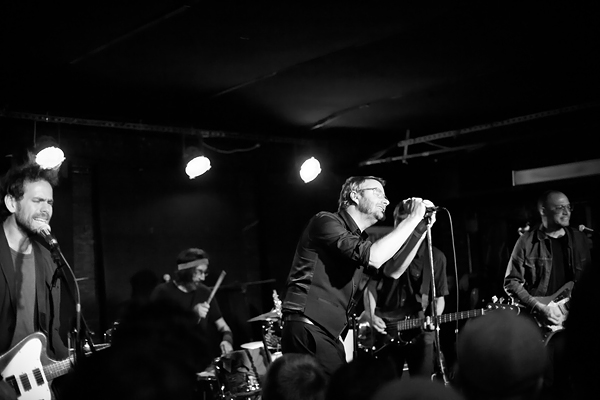 But their 14-song set at Mercury Lounge didn’t include anything earlier than 2004’s Alligator, and focused mainly on the new record. Performing on a stage about two feet high, the five-piece band (with two additional multi-instrumentalists who alternated between keys and horns) seemed to blend with the crowd, almost at eye level. In such a small room, the satisfying subtleties that course through the songs’ studio versions didn’t get the reverberation or balance they deserve, but it didn’t matter. Berninger channeled the heightened sense of intimacy with his baritone venom and cryptic lyrics. On the new song “Humiliation,” they blasted through an instrumental break that swerved far left of the studio version, a highlight of the night. 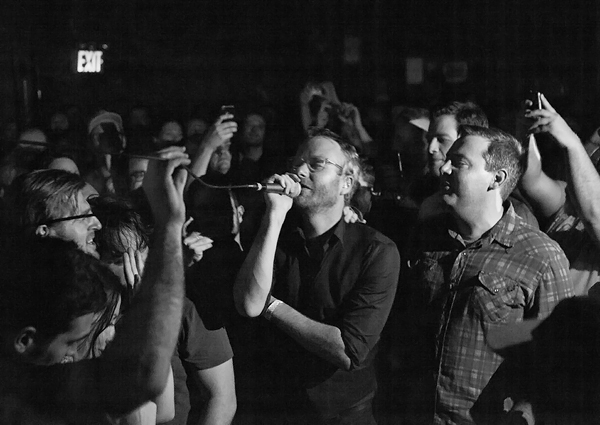 The restless fog of the day was an appropriate launch for Trouble, which has been carefully promoted with choice late-night appearances (most recently Monday on Letterman), fan connections (they debuted the video for “Sea of Love” on a Reddit Ask Me Anything chat) and freebies (they started streaming the album in full on May 13th). In a time when over-the-top teasers and stunts run rampant before major album releases, the National’s unassuming approach was a gentle nudge in the right direction.