The Making of Band Aid: Secrets and Stories From the Legendary Session - Rolling Stone
×

It’s not yet Thanksgiving, but those commercial-free holiday-music marathons are already inescapable. Listen long enough and, after repeat playings of Mariah Carey and Mannheim Steamroller, you’ll eventually be treated to that darkest of year-end chestnuts: Band Aid’s “Do They Know It’s Christmas?”

“The lyrics are bleak, but essentially so, and a welcome change from the bromides of mistletoe and the saccharine Christmas fare that is usually served up,” says Sting, recalling the charity single he recorded 30 years ago – on November 25th – as a member of the mostly-British supergroup.

Nearly 40 artists – many of the biggest acts of the early Eighties, like Duran Duran, Culture Club, Wham!, even a then-bubbling-under U2 – converged that day at London’s Sarm Studios in response to a harrowing BBC report on the starving victims of the Ethiopian famine. And every year since, “Do They Know It’s Christmas?” reminds us, as we gobble down our holiday dinners, that “there’s a world outside your window/it’s a world of dread and fear.” Then, in its bluntest moment: “Tonight thank God it’s them instead of you.”

Inside Band Aid 30: The Story Behind the Unexpected Reunion

Watch Boy George Break Down the Biggest Hits of 1984 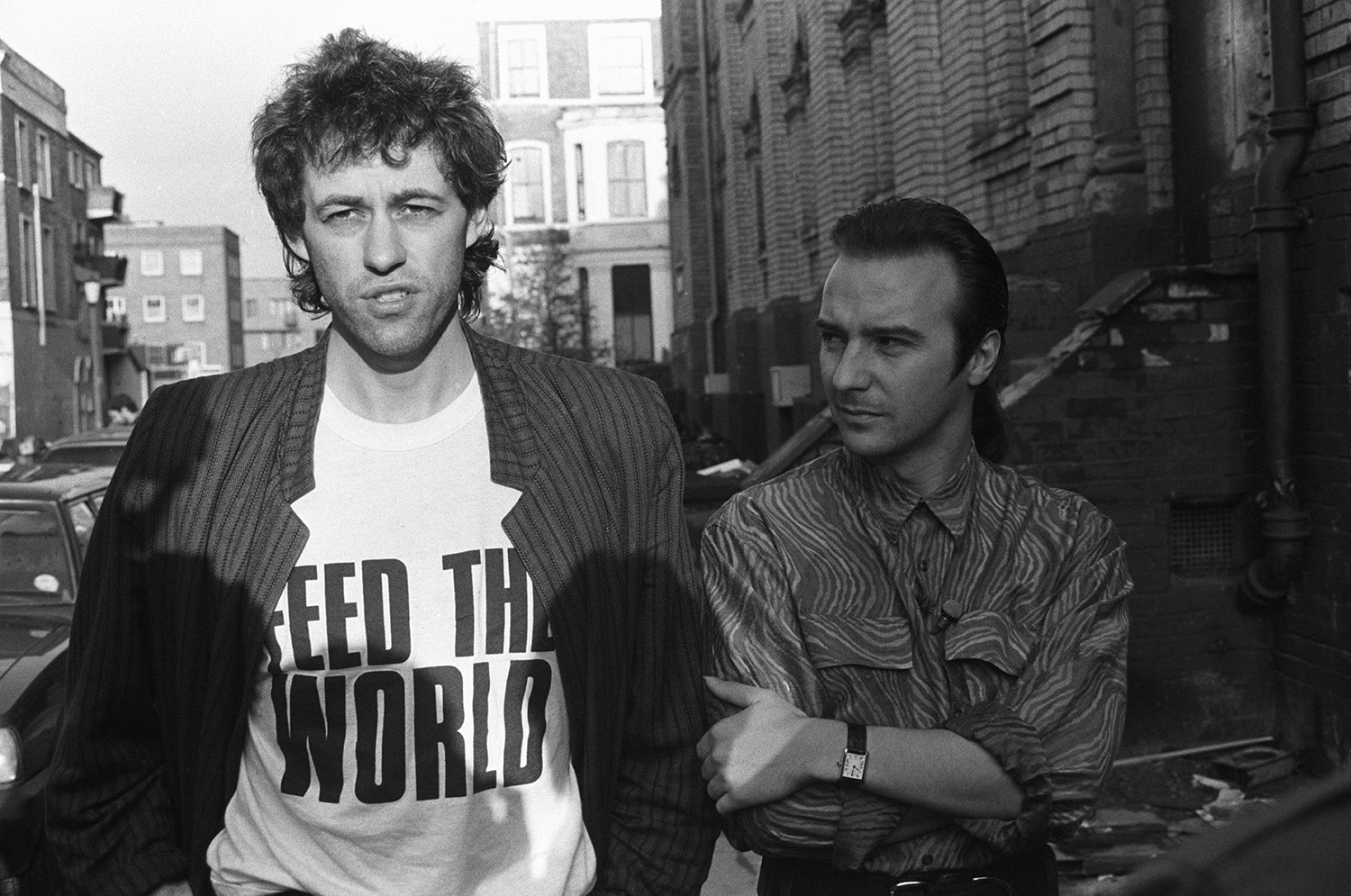 “It was a song written for a specific purpose: to touch people’s heartstrings and to loosen the purse strings,” says ex-Ultravox singer Midge Ure, who wrote the song with Band Aid organizer Bob Geldof, frontman for the Boomtown Rats. “[The lyrics] had to be brutal. We were looking at television pictures of children spending five minutes trying to stand up.”

“Band Aid and Live Aid were a great contradiction to what people thought, another side of the decade,” says Boy George. “The Eighties were about greed and excess – we were called Thatcher’s Children.”

“We got lumped in with Thatcherism because people thought we were living the high life,” adds Simon Le Bon. One reason Le Bon and his contemporaries found Band Aid so attractive, he says, was because it “was this opportunity to do something that wasn’t about ‘me.’ It made you feel you could do something useful. We made young people believe they had some kind of power and were able to do something that did have an effect.”

In stores just three days after it was recorded, “Do They Know” remained the U.K.’s biggest-selling record until Elton John’s Princess Diana tribute version of “Candle in the Wind” overtook it almost 15 years later.

Earlier this month, new group of stars came together (at the U.N.’s request) to record a 30th anniversary update, but Geldof himself still has trouble hearing the original. “I associate it with the meat counter at my local supermarket,” he says. “Every time I arrive to buy the fucking turkey, I hear [hums the song’s intro]. The butcher looks at me with a little smile and I go, ‘Yeah, yeah. Give me the fucking turkey, dude.'”

Here, he and his cast of musicians detail their world-changing session and share some of their favorite untold stories from the making of the hit. 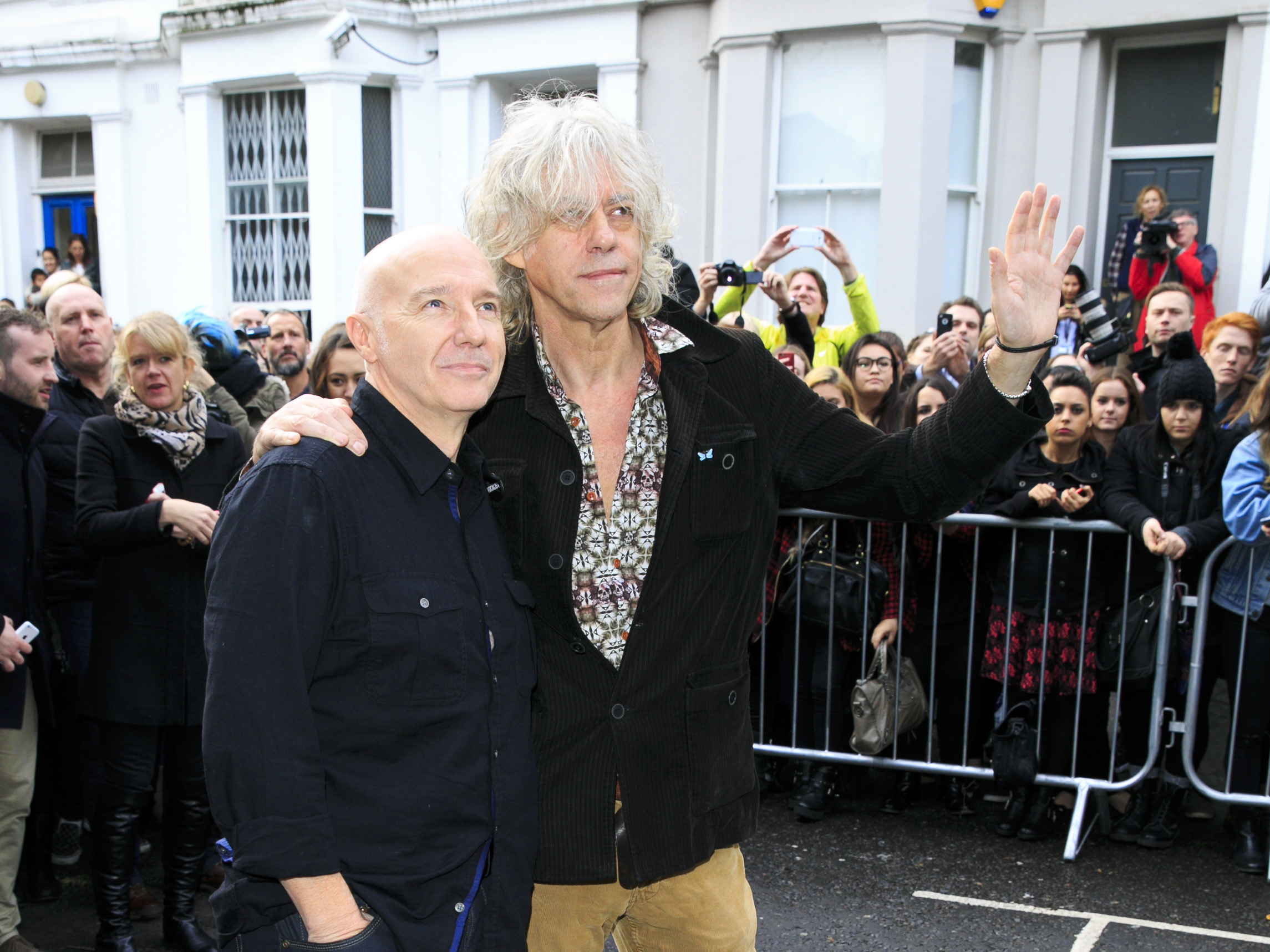 “Do They Know It‘s Christmas?” began life as a rejected Boomtown Rats tune.
Midge Ure: Bob turned up at my place with a guitar that looked as though he’d found it in a dump. It had hardly any strings on it. He started singing me this thing – it was obvious he was making it up as he went along. He sounded like a demented Bob Dylan. There was no melody, no structure and every time he sang it, it sounded different. He presented me the idea for the lyrics, the “It’s Christmastime, there’s no need to be afraid.” My main contribution was changing “And there won’t be snow in Ethiopia this Christmas,” which doesn’t scan in anybody’s book. We changed that to “Africa,” and we wrote the middle section together: “Here’s to you, raise a glass for everyone,” which is the nod to the irony of [it being a] Christmas record.

Simon Le Bon thought “Do They Know It‘s Christmas?” was going to be a duet between him and Sting.
Simon Le Bon: I was the first one Bob called. He called out of the blue and said, “Simon, did you see the [BBC report on the Ethiopian famine] last night? We’ve got to do something.” I didn’t see the program. He told me what it was about, and he said, “I have an idea. We should make a charity record. What do you think?” I said, “Yes, mate. Absolutely.” But it wasn’t sold to me as, “This is going to be a whole pile of musical legends”; it was, “You and Sting do it.” I thought I was going to get half the song. I was a bit pissed off, because when I walked into [Sarm Studios] they’re already recording somebody else singing one of my lines! That took a while to sort of get my head around.

Sting didn‘t want to sing the lyric, “the bitter sting of tears.“
Bob Geldof: Sting was moaning, “Do I have to sing that?” I said, “Yes, because it’s just a coincidence that the word sting is in it.” If you listen to the song, there’s a deep bitterness in Sting’s voice.

Sting: There’s a touch of irony there. When we had to dole out the lines to everyone else, it wasn’t an accident. I was still the King of Pain after all.

Bono didn‘t want to sing his line – “Tonight thank God it‘s them instead of you” – either.
Ure: Bono had a problem with it. He said, “Why would you say that?” That can be perceived as a brutal, unfeeling line.

Geldof: He said, “Are you really sure that’s what you want to say?” And I said, “I’m really sure.” I went through it with him rather like a director goes through a line that the actor may not be happy with.

Ure: But we’re not saying, “Rather them than us.” We’re saying how lucky we are that we don’t have to deal with that kind of extreme poverty. [After] Bob explained, Bono got it, and turned it into this magical moment on the record.

Geldof: He just has a profound rage. If you listen to the way the emotion of the song scales up, that’s the big powerful explosion. That became a phenomenon, which none of us expected.

Ure: I think he probably scared himself when he did it. He jumped way up an octave, and it was just astonishing – the sound that this little guy could radiate! It was like standing next to an opera singer. He did it twice but I think we kept the first.

JT Taylor (Kool and the Gang): I hated that line. All these years, I thought I was the only only person who felt that. For me, it was the worst line in the whole song. 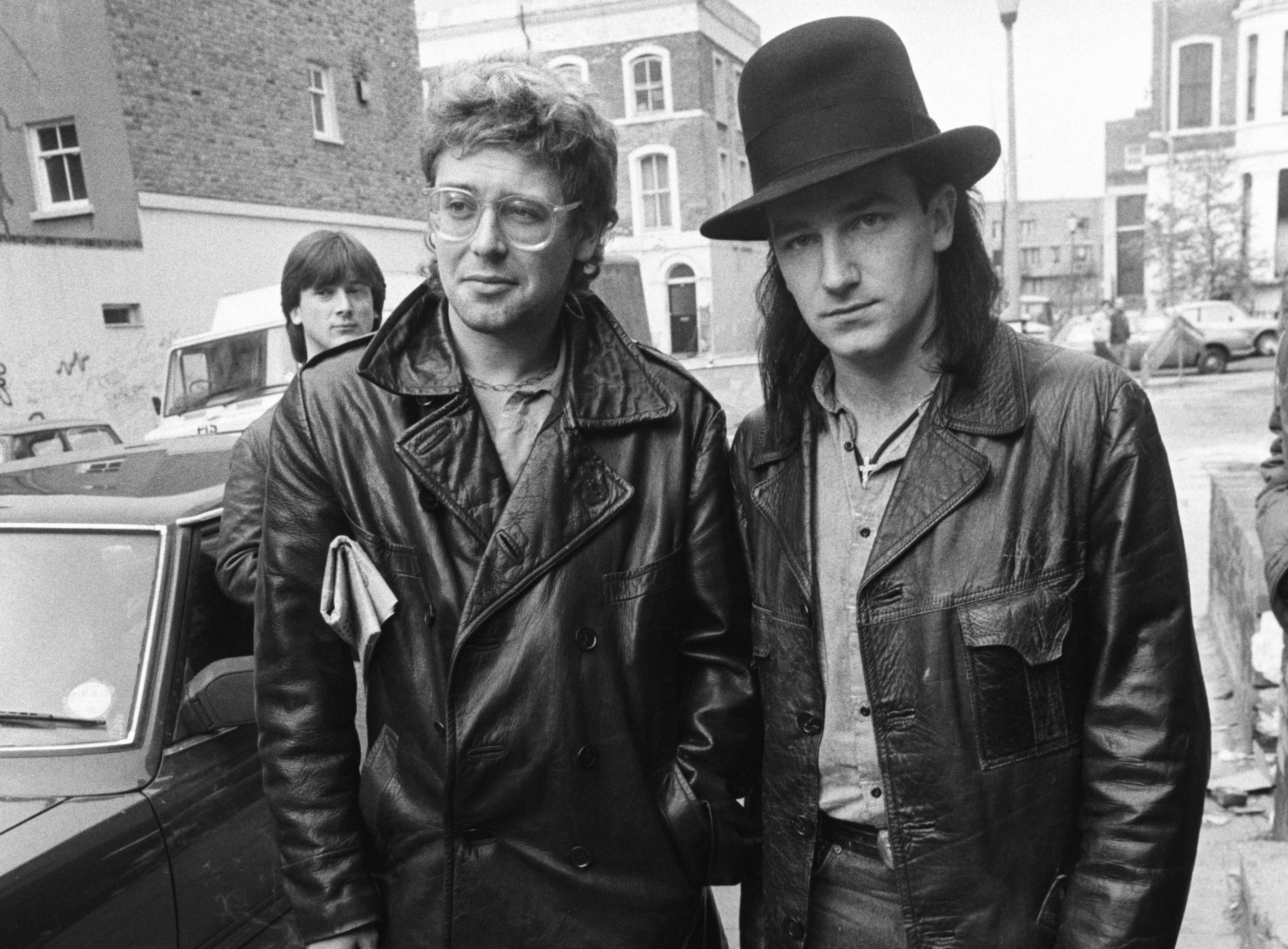 Band Aid taught Bono “how to care.”
Ure: The Band Aid process changed him quite considerably. I saw a U2 concert three, four years ago, and they stopped the concert in the middle and said, “In the audience tonight…” And the spotlight came on me. Bono said, “Him and Bob taught me how to care.”

Geldof: I pulled him into Band Aid. [U2] were young turks on the make; they hadn’t really crested yet. But I thought, “He’s got such a voice.” And then Live Aid – they thought they blew it. It actually pushed them over the top. A few years later, he wanted to get involved in a related subject [the ONE Campaign, which fights extreme poverty and disease in Africa]. We argue all the time; it’s kind of a good cop/bad cop [friendship]. He wants to give the world a big hug; I want to punch its lights out.

Boy George almost missed the recording session entirely.
Boy George: Culture Club had just done a show at Madison Square Garden, and I was in bed at the Plaza hotel. I got a call at three o’clock in the morning from Bob Geldof, whom I’d never met.

Ure: We had to have him. So Bob woke him up in New York. George said, “Who’s there?” Bob said, “Every fucker but you. Get your ass on Concorde.” And he did – at his own expense, I might add.

George: When I arrived, around eight o’clock in the evening, there was no time to practice or maybe have a go at the song to make sure you’re in the right key. It was literally: “You’re on!” I was thinking, “Oh my God, what’s going to come out of my mouth?”

Ure: He turned up, and he said, “Can someone get me a brandy?” I had to press the intercom button and say, “No! We don’t have anyone here to go running about for you.” We didn’t have mountains of food, we didn’t have champagne, there was no sponsorship going on. It was incredibly basic.

George: I did pretty well, though. I remember Bob saying, “Oh George, you sound like a black lady – like a black mama!” I was like, “That’s what I’m aiming for, so thank you!”

Duran Duran and Spandau Ballet arrived together – hungover.
Tony Hadley (Spandau Ballet): The night before we were in Germany on the piss with Duran, having a real good drink. By the morning, we were all pretty rough. We didn’t look great. I remember arriving back at Heathrow and someone said, “There’s all the press, there’s cameras out there, there’s about 400 screaming fans.” All of a sudden we’re all in the bathroom trying to make ourselves look presentable – you know, Nick Rhodes putting stacks of makeup on. I think we all put a bit of makeup on that day, actually.

Le Bon: I remember turning up in the car with a hangover. I did everything with a hangover in those days. I don’t think John [Taylor, Duran Duran] had been to sleep at all. But that was John. He just didn’t need much in those days because of chemical sleep. 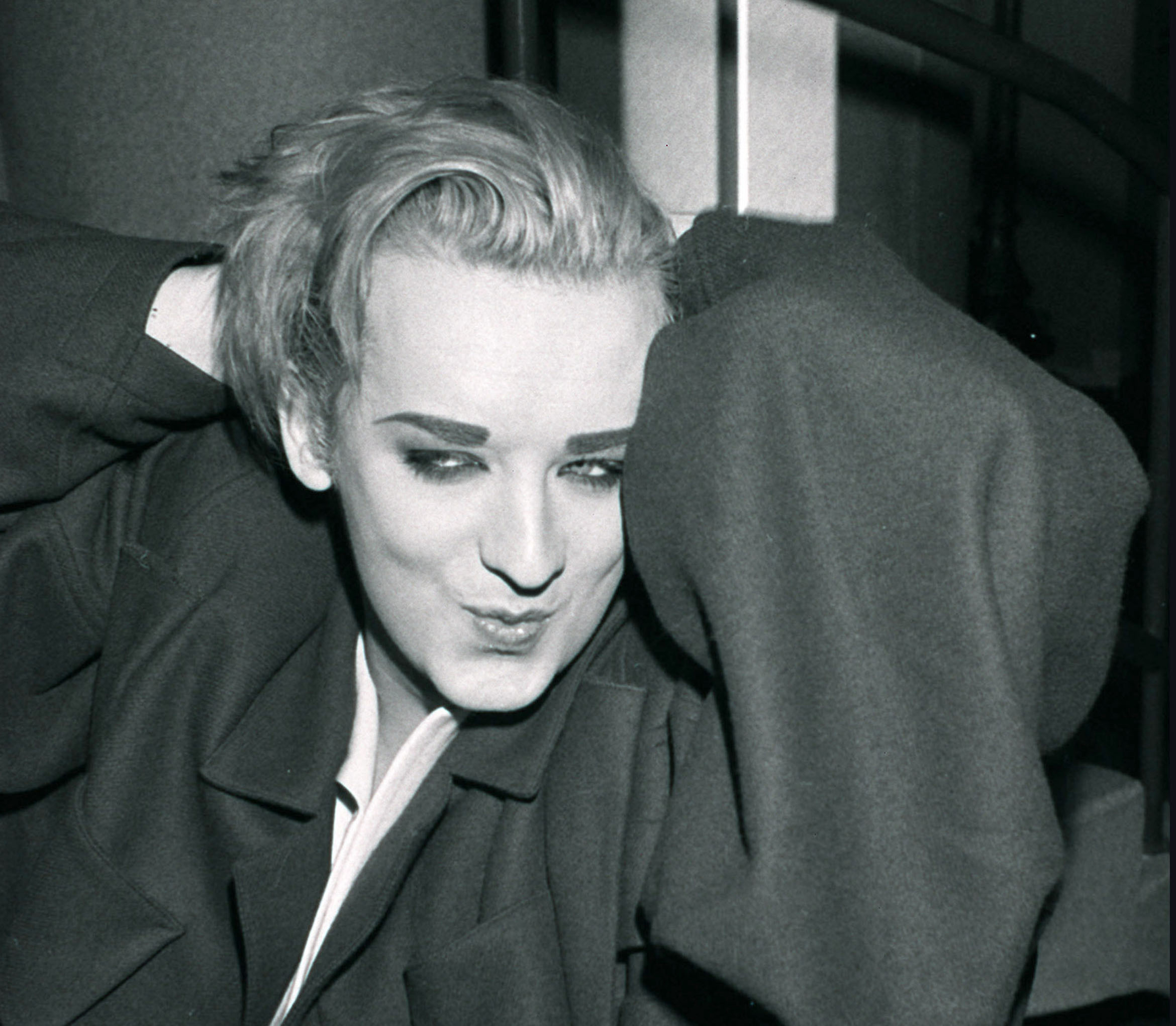 The session was – as Boy George puts it – “a carnival of celebrities.”
Sting: It was a funny day, like a school reunion for truants. All of us had a lot in common but had rarely been in the same room together. There were no fights as I remember.

Le Bon: That was the first time I met Sting. He was very friendly, apart from when I said, “God, it’s really hot and sweaty in here,” and he told me not to do so many drugs.

George: I had had a feud with Simon Le Bon, a bit of a confrontation in Paris, and we ended up walking into the studio arm in arm for the press.

Le Bon: Paul Weller wasn’t very friendly. He was very political. . . and [Duran Duran] as a band had always stayed clear of politics. But [Band Aid] wasn’t about politics, it was about saving lives. People wanted to have an effect, and that really is the line that joins me to Paul Weller. He wanted to help feed some kid in Africa, same as I did.

George: I remember hearing the voice after me and saying, “Who’s that? Who’s the girl?” and then being told it was George Michael. I said, “He sounds really camp.” Then I said, “But he is, though, isn’t he?” I was always trying to out George.

After the session, George Harrison advised on how to prevent Band Aid from turning into another financially questionable Concert for Bangladesh.
Ure: The Concert [for Bangaldesh]. . .all of the money didn’t get where it was meant to go. It was spent on overhead and ad men. So [Harrison’s advice to Geldof] was, “Get yourselves good accountants.” We have the same accountants today who [ensure] we don’t spent a penny on anything. We’ve had no office, no secretaries. We begged, borrowed, and stole telephone lines, space, whatever we could.