The Legacy of Lucille: The Surprising Story Behind B.B. King's Guitar - Rolling Stone
×

Eric Clapton had “Blackie” and “Brownie”; Willie Nelson has “Trigger”; Keith Richards, “Micawber.” But before all of them, B.B. King had “Lucille.”

For more than a half-century, the bluesman and Lucille have been virtually inseparable — few, if any, relationships between man and guitar have persevered for as long or proven more fruitful. Lucille is the stinging single-note lines that punctuate “The Thrill Is Gone” and “Sweet Little Angel”; the embodiment of the whole of American blues music on U2’s “When Love Comes to Town”; and, more generally speaking, the sound that has stirred and inspired guitarists for generations. Lucille also serves as B.B. King’s voice, as much as the bluesman’s actual voice. “The minute I stop singing orally,” he once said, “I start to sing by playing Lucille.”

One thing that Lucille is not — unlike Blackie, Trigger or Micawber — is a one-of-a-kind instrument. Through the years, there have been many Lucilles. Today, Lucille is widely recognized as a black-with-gold-hardware Gibson ES-355–style guitar. But she came into being as a much different instrument, one born — in a origin story befitting a blues icon — in a burst of fighting and fire.

Lucille’s beginnings date to 1949, when King, then in his early 20s, was performing at a nightclub in Twist, Arkansas, in the dead of winter. To heat the cold room, King recalled in a video interview, “they would take something that looked like a big garbage pail, half fill it with kerosene, light that fuel [and] set it in the middle of the dance floor.” All well and good, but on this night, a fight broke out between two men, and the pail was knocked over. “It spilled on the floor, it looked like a river fire,” the guitarist said. “And everyone started to run for the front door, including B.B. King.”

The blueseman managed to make it to safety outside — only to realize he had left his guitar behind. He raced back inside to retrieve it even as the wooden building, he said, “started to fall in around me.” The next day, he learned that two men had died in the blaze and that the fight that had set off the tragic chain of events had been over a woman who worked at the club. Her name was Lucille. 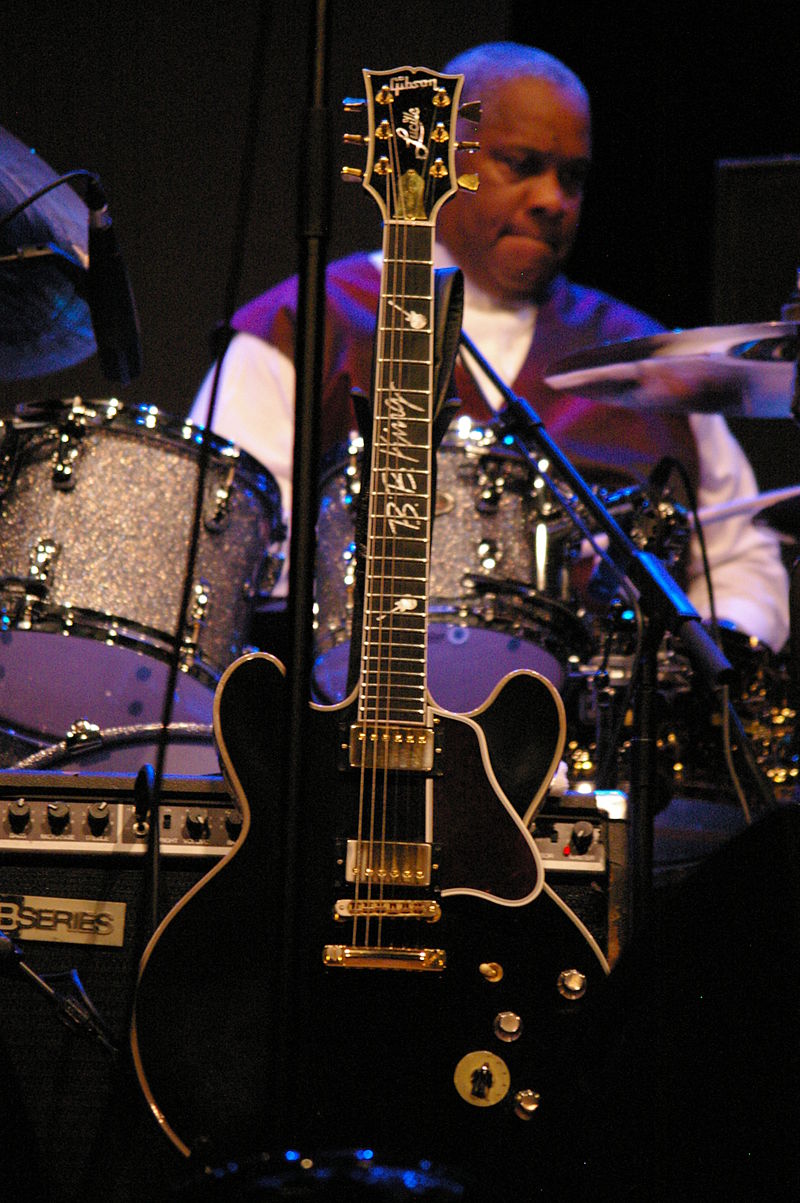 B.B., who claimed he “almost lost [his] life” rushing back into the nightclub, christened his guitar after her, he said, “to remind me never to do a thing like that again.”

The original Lucille — the guitar King rescued that night in the fire — was an inexpensive, small-bodied Gibson L-30 archtop. The singer would go on to play a range of guitars over the ensuing years, attaching the Lucille name to each one. He was particularly drawn to Gibsons of the semi-hollow “ES” (Electric Spanish) variety, such as the ES-335 model that can be heard on his legendary 1965 disc, Live at the Regal. He eventually arrived at the ES-355, a top-of-the-line model boasting stately looks (gold-plated hardware, multi-layered binding, big mother-of-pearl fretboard markers) and a sharp but sweet tone bolstered by dual humbucking pickups and stereo and mono outputs.

The ES-355 remained B.B.’s instrument of choice until the early Eighties, when he collaborated with Gibson to create his own signature model. Known as the Gibson “Lucille,” the guitar was essentially a 355 outfitted with several modifications, some of them aesthetic (the personalized “Lucille” headstock), and others more functional — King, who reportedly would occasionally stuff rags into the f-holes of his guitars to reduce feedback, requested that on his signature model the f-holes simply be removed entirely.

Over the years, the Gibson Lucille has been issued in a variety of iterations, including a limited-edition “King of the Blues” version and an ostentatious “Super Lucille.” In 2005, Gibson produced an 80th Birthday model Lucille for the bluesman, which he summarily adopted as his main stage instrument — until, in the summer of 2009, it was stolen. But a few months later, a guitar trader and appraiser named Eric Dahl came across this very Lucille in a Las Vegas pawn shop. “The whole thing was covered in sweat. The strings were nasty,” Dahl told Gibson.com. “Then I flipped it over and looked at the headstock and it said, ‘Prototype 1’ in a white stamp…. I assumed it meant this was one of the original 80th Birthday model Lucilles that B.B. King had approved.”

Unaware of what he was holding in his hands, but curious about its unusual headstock stamp, Dahl contacted Gibson about the guitar. Following several months of dead-end inquiries, he was notified that the instrument was not merely a Lucille approved by B.B. King but, rather, King’s actual Lucille. Upon hearing his guitar had been recovered, King met with Dahl and traded him a new Lucille for the prized 80th Birthday model. Following the exchange, Dahl recalled that King “told me he hoped I’d enjoy playing mine as much as he enjoys playing his.”

Indeed, it would seem that B.B. King has continued to enjoy playing his Lucille, right up to and through his most recent show, on October 3rd, 2014. That night, like thousands of nights before it, could likely have been summed up by the opening lines of King’s song “Lucille,” the paean to his trusty companion that King recorded for his 1968 album of the same name:

It’s a sound blues fans have been listening to now for more than 50 years, and it’s one the world won’t soon forget.