Leaning heavily on songs from their latest album Battle Born – which takes its name from a phrase on the Nevada state flag – the band represented its home city in both spectacle and sentiment, larding the two-hour concert with pyrotechnics, lasers and enough flashing projections to warrant a seizure warning.

Following a short set by Canadian pop-rockers Tegan and Sara, the Killers began their show with appropriate pomp, with lead singer Brandon Flowers climbing the monitors and raising his arms meaningfully during “Flesh and Bone,” the first track from Battle Born. Looking fit and steely, he quickly put down any concerns about his vocal health, which caused the band to cancel a pair of Manchester shows earlier this month.

“It’s our first show here in three years, and you haven’t deserted us!” Flowers gushed during a rambling intro to “The Way It Was.” “I’m no good at talking about it, so I’ll just sing about it.”

The Killers have always been Flowers’ show, but that fact was clearer than ever during the soaring choruses of songs such as “Smile Like You Mean It” and “Miss Atomic Bomb.” The band can sound limited and thin in the studio, despite their phalanx of notable producers, and close inspection has never done any favors for Flowers’ painfully clichéd lyrics. But live, his voice is the burning core of the group’s appeal. It helped that guitarist Dave Keuning, bassist Mark Stoermer and drummer Ronnie Vannucci were joined by a pair of backup guitarist-keyboardists, and the thunderous, meaty sound they wrought put most of the Killers’ recorded work to shame. Who needs quality lyrics or subtlety when you have punishing volume and Swiss precision? 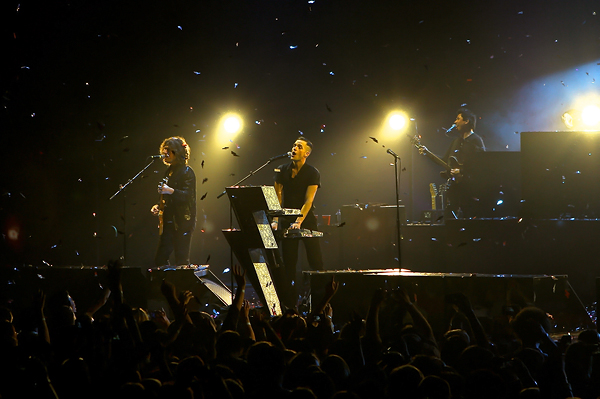 The band isn’t really known for subtlety, of course. The visuals projected onto the widescreen behind them were often about as literal a pairing with the music as one could imagine – starfields and cosmic imagery for “Spaceman,” sepia-toned visions of the wide-open-west for “A Dustland Fairytale.” Sometimes they contrasted bizarrely with the song, as when a muddy-sounding “Somebody Told Me” was backed by virtual golden bulbs that made the stage look like a nightmarish game show perched on the edge of reality.

The displays occasionally strayed into full-on summer concert territory, or even a Vegas-revue homage. Every few songs, smoke pots, curtains of sparks, red flames and blasts of sparkling confetti showered the band. Even without them, the energy in the sold-out venue was immense, despite the fact that the floor of the 6,500-capacity arena seemed barely half-full. The all-ages GA audience had crowded to the front, and even the seated patrons stood for the entire performance, a few little girls perched atop their fathers’ bouncing shoulders.

There were missteps, as when the infectious, clanging riff on “When You Were Young” – arguably the band’s best – was bludgeoned by an imprecise mix, or the Jackson Browne-indebted “Here With Me” showed just how little Flowers’ songwriting has evolved since moving from Anglophile to heartland-rock tourist. But for all the cheesy synth flourishes and stadium moves cribbed from Bono and Springsteen, Flowers still came off as genuinely humbled by the adoration. He even name-checked the Larimer Lounge, a Denver indie rock venue where the Killers first played to “probably seven or eight people,” as an example of how far the band has come.

He may not always be artful, but unlike his hometown, Flowers can be charmingly earnest. A nice Mormon boy with a hipster-Marine haircut, a highly successful, U2-meets-Bruce songwriting formula, and the live chops of a singer with something to prove. Vegas should be proud.

Set list:
“Flesh and Bone”
“The Way It Was”
“Smile Like You Mean It”
“Spaceman”
“Heart of a Girl”
“Bling (Confession of a King)”
“Miss Atomic Bomb”
“Human”
“Somebody Told Me”
“Here With Me”
“For Reasons Unknown”
“From Here on Out”
“A Dustland Fairytale”
“Read My Mind”
“Runaways”
“Mr. Brightside”
“All These Things That I’ve Done”
“Jenny Was a Friend of Mine”
“When You Were Young”
“Battle Born”