The one thing Lou Reed did not do, over 50 years of recording, was make a truly solo album: alone with new songs, acoustic in a studio. The closest he came was the quiet and delicacy of 1969’s The Velvet Underground, his third album with that group, and 1997’s Perfect Night: Live in London, a semi-unplugged concert survey of obscured jewels like the gorgeous, otherwise unrecorded “Talking Book” from Timerocker,Reed’s 1997 theatrical collaboration with Robert Wilson.

Joseph Arthur‘s new album, Lou (Vanguard), is a moving tribute to the composer and that missed opportunity: Arthur singing 12 Reed songs with only his piano, acoustic guitar and a few, poignant vocal overdubs for company. “I made a rule,” Arthur writes in his liner notes, “no drums or electricity.” He stuck to it in a canny selection of hits and hidden genius.

The first track is “Walk on the Wild Side,” tenderly sung at a wounded crawl. But Lou really starts with the sharply drawn peril of “Sword of Damocles” from 1992’s Magic and Loss, framed in martial strumming and haunted piano. Arthur adds a high, distant vocal to “Stephanie Says,” as if Stephanie is in the room, singing back to him; “Heroin,” stripped of its original amplifier heat and John Cale‘s scalding viola, is a blues again; and “Wild Child,” a Velvets-era orphan revived by Reed for his self-titled 1972 debut, gets a gingerly hypnotizing third life.

Arthur, a friend of Reed’s, says making this album was like “getting to hang out with Lou again. This was the only way to get close.” There is plenty of room for the rest of us too.

I can tell you exactly what I thought when I dropped the needle for the first time, in 1982, on the jumping pulse and raw-guitar grind of “Sure Thing,” the first track on the self-titled debut EP by the Dream Syndicate: “Wow, they sound like the Velvet Underground.” Singer-guitarist Steve Wynn, now leading the strong, long-running Miracle 3, continues to honor that early debt. His gentle-to-wrenching performance of Reed’s “Coney Island Baby” was a runaway highlight of an SXSW all-star tribute concert in March. 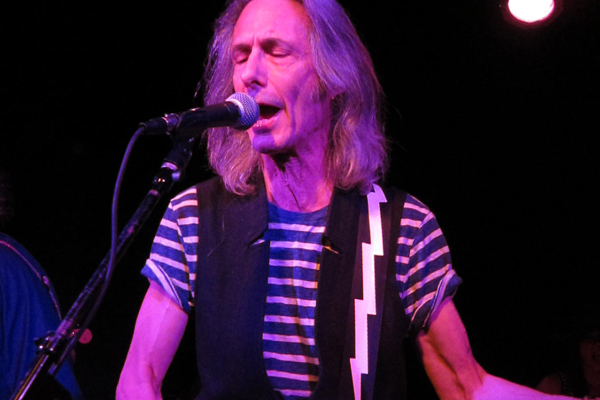 Wynn and the Miracle 3 – guitarist Jason Victor, bassist Dave DeCastro and drummer Linda Pitmon – played that song again on May 29th at New York’s Bowery Electric, in the middle of nine other Lou Reed covers that ranged from the Velvets’ graceful wake-up call “Sunday Morning” to Reed’s cannonball of attitude on 1978’s Street Hassle, “Leave Me Alone,” fattened with saxophone and so much fuzz that it sounded like a hard chip off the Stooges’ “Fun House.” Also revived with extreme, noisy delight: the Velvets’ “There She Goes Again,” with that nicked lick from Marvin Gaye’s “Hitch Hike”; “Crazy Feeling,” the opening number on 1976’s Coney Island Baby, with Victor greasing the agitation with dirty-slide guitar; and “Run, Run, Run,” starring Reed’s friend, Patti Smith guitarist Lenny Kaye, on vocals and hard strum.

Kaye hung around for Loaded‘s “Rock and Roll” and an inevitable full-throttle “Sister Ray.” But there was a moment at the end of “Coney Island Baby,” easy to miss amidst the afterburn of that “Glory of love” crescendo, that spoke volumes about the night: when Wynn quoted Van Morrison, singing “Listen to the lion” in a low, humbled register. It sounded like gratitude, of course, but also urgent advice – the kind, with Reed gone, that you can’t hear too often.