Over the course of their career so far, New Jersey rockers the Gaslight Anthem have worn their hearts on their sleeves, as well as their influences. Drawing from the earnest confessionals of the Replacements, the cocksure swagger of the Clash and the indefatigable charisma of their homestate hero Bruce Springsteen, they’ve concocted a unique blend of punk and folk topped with a double dose of sincerity. Luckily for Gaslight Anthem, blue-collar honesty seems to be what their fans appreciate most, and nowhere has that been more apparent than at their show last night at New York’s Webster Hall.

It was the release day for the band’s fourth LP, Handwritten – an album full of adrenaline-stoking anthems like “45” and lovelorn numbers like “Here Comes My Man” – and judging from how the audience sang along, moshed and crowdsurfed to nearly every tune from the LP, many present had already purchased it. This observation did not go unnoticed by the group. Just before playing Handwritten‘s title track, frontman Brian Fallon said, “When I woke up this morning, someone told me, ‘Hey, you’re doing pretty good on the iTunes charts.’ It’s so unbelievable that our little record is Number One on the whole thing.” Then that sincerity kicked in, as he said, “The way we look at it, we’re four kids from New Jersey. We’re in a band – we quit our jobs and did not go back – and you guys liked it. It means a lot.” As the audience roared back with approval, it was clear that for everyone in the venue, this night was a celebration. 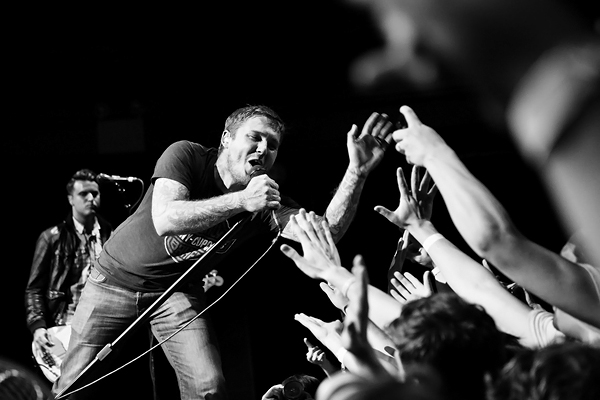 Perhaps the reason why everyone could get involved was because the group put on no airs. When the Gaslight Anthem took to the stage, they hung out in the darkness for a minute or so, then finally kicked into “Mae,” a heartfelt Handwritten track, and kept the lights down. Guitarist Alex Rosamilia even wore a hoodie for the duration of the concert. As the song ended, they turned on the lights and launched into the rousing title cut from their 2008 breakthrough, The ’59 Sound. With that, the venue began to shake from all of the fans jumping, clapping and singing along.

The shared energy between the Gaslight Anthem and their audience lasted for the rest of the marathon-length, nearly 30-song set, which found the group focusing heavily on Handwritten and The ’59 Sound – not that anyone seemed to mind. On slower songs like the family drama lament “Keepsake,” men shouted along fervently to lyrics like, “I just want to love someone who has the same blood.” And a group of fans even filmed themselves, bright cell phone flash and all, singing along with Fallon during “The Patient Ferris Wheel.” The singer, who wore a Harley-Davidson-like Johnny Cupcakes tee and an ear-to-ear smile throughout the night, returned the ardor when he thanked all in attendance before playing the new LP’s lumbering “Too Much Blood,” even bowing. “I’m not bowing to you,” he clarified. “I’m bowing for you.”

In the time the group left and returned for a nine-song encore, the excitement in the audience intensified. After a solo performance by Fallon of a song by Fake Problems – the first band to take Gaslight Anthem on the road – the dance floor was in perpetual motion, with mini mosh pits forming and one crowdsurfer after another floating toward the stage during fan favorites like “American Slang” and “Great Expectations.” The evening’s jubilation wasn’t just for the band, though. Fallon brought up a concertgoer named Laura, who was holding a heart-shaped sign saying it was her birthday, and led the crowd in a round of “Happy Birthday,” after which she stayed onstage for the duration of the ballad “Blue Jeans & White T-Shirts,” dancing and singing along. When the group left the stage for a final time, after playing The ’59 Sound’s Springsteen-esque “The Backseat,” a song came up on the PA that seemed to capture its mood: Hall and Oates’ “You Make My Dreams.” This sort of ultra-sincere move might seem a little corny from any other band, but with the Gaslight Anthem, it’s easy to believe they would mean it. 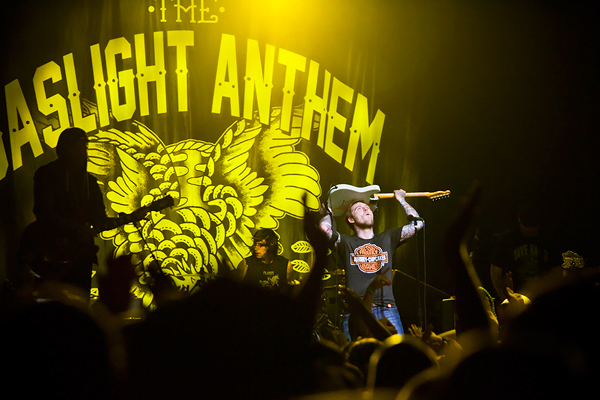