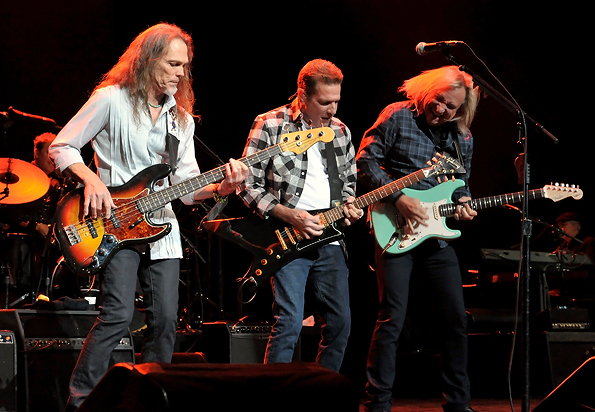 According to Joe Walsh, the Eagles are going to celebrate their upcoming 40th anniversary with a retrospective tour next year. “Everybody’s seen our show, so we have to put together something new,” the guitarist tells Rolling Stone. “We’ve been archiving so much stuff from the band’s early days, concert footage and interviews and stuff. Those will be the visuals to go along with the songs. We’ll also revisit some old songs and some new stuff.”

Walsh says the band plans to tour for four or five months in the second half of 2012 – which leaves him with plenty of time for other projects. He just finished work on a solo album that he hopes to release in February or March, and he wants to tour again with the James Gang. “I just played Cleveland solo and I saw Jimmy [Fox] and Dale [Peters],” he says. “We got together a few years ago just for six shows, just to see if we still had it. And we pretty much did. So, a James Gang tour is on my list. I’ve just been so darn busy with the Eagles. We played everywhere in the world last year.”

The Joe Walsh lineup of the James Gang haven’t cut an album since Thirds in 1971. “We should record at least four things playing the way that we used to,” says Walsh. “I don’t want to use Pro Tools and I want to overdub, because you can’t do that live. But if we can do at least four things new and get them on the Internet, I think with that and a cross section of the old stuff, we’d have all we need to go out and try and kick some ass. I hope we get to do that in the first half of 2012. I really hope it works out.”

Related
• Don Henley: Record Companies ‘Not Going to Roll Over’ on Copyright Issues