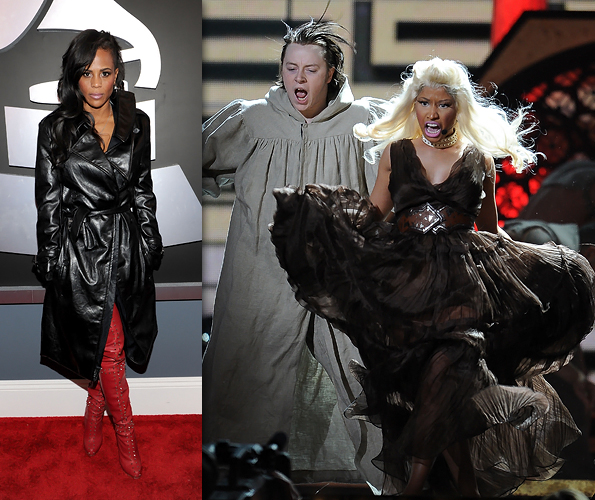 What goes into directing a pop spectacle like the one Nicki Minaj unveiled at the Grammys? Meet creative director Laurieann Gibson, who has created and choreographed some of the most visually stimulating stage shows in the pop world.

Gibson woke up in South Korea Wednesday morning (Tuesday night in the U.S.) to find herself at the top of the U.S. headlines. Overseas, the Alvin Ailey-trained dancer is putting together the stage show for K-Pop sensation BigBang (check out their takes on Maroon 5’s ‘This Love’ and Mariah Carey’s ‘We Belong Together’), but stateside Gibson has gained notoriety as the creative engine behind Minaj’s controversial Grammy performance.

“I woke up this morning like, ‘huh?'” Gibson tells Rolling Stone, seemingly puzzled by the way Minaj’s performance at the 54th Grammys seemed to overshadow everything on the busy show, from Jennifer Hudson’s emotional tribute to the late Whitney Houston to the reunited Beach Boys and Adele’s astonishing six-award sweep. Minaj performed the new track “Roman Holiday” as her nihilistic alter-ego Roman Zolanski, executing the first-ever mock exorcism on the Grammy stage. Critics were quick to pan the performance for its over-the-top religious overtones and similarities to other church-baiting performances in the name of pop music, among them Madonna’s “Like a Prayer”  and Lady Gaga’s “Judas” video, which Gibson co-directed. The Catholic League blasted Minaj’s performance on their website for its “vulgar” choreography, taking special exception to “a scantily clad female dancer stretching backwards while an altar boy knelt between her legs in prayer.”

“To be honest, no, we didn’t do anything for controversy,” Gibson claims. “We never had that conversation at all. Nicki just truly wanted Roman to be exorcised, and I just went to work.”

For her part, Gibson was tasked with marrying Minaj’s idea of the exorcism and the Hype Williams-directed video that accompanied the performance. Titled ‘The Exorcism of Roman,’ the video borrowed imagery from the 1973 classic The Exorcist and more recent horror flicks like The Devil Inside.

A self-described “believer” and Catholic, Gibson says she never watched The Exorcist as a child because it “scared the boots” off her. To adapt Minaj’s ideas for the stage, she looked to the House of Borghese and the Vatican for inspiration. “I love the inspiration of those colors and that architectural world,” Gibson says. “I personally chose to stay away from any religious moves. There were no crosses. There were no religious symbols. We made sure we were very respectable. The bishop was a symbolic figurehead. He was not [intended] in a negative light, but in a position of authority.”

Gibson assumes the reason Minaj’s performance drew so much attention is simply because Catholic imagery alongside pop music just does. “You don’t get press on the other stuff,” she says. “As far as the theatrical and dramatic performance, it’s entertainment. If you are going to rise up about a performance that is not literal or harming from two people that are believers, then we need to see that anger being used to make a change.”

This isn’t the first time Gibson has been attacked by the Catholic League for her choreography. It happened with her work on Lady Gaga’s “Judas” video. On YouTube the video, which begins with Gaga riding with a biker gang made up of Jesus’ apostles, has more than 127 million hits.

“I loved the idea of Jesus being on a motorcycle bringing them from Damascus to face a situation that might not be so favorable,” Gibson says. She doesn’t see similarities between the Gaga video and Minaj’s Grammy performance. “They are two completely different stories. As far as what I do and the execution of it, that’s great that it is at that level where people recognize the similarities and how I execute for an artist. But ‘Judas’ was a completely different experience. Nicki is extremely unique – it’s a different genre of music. What people are feeling is the similarity in what I do and how I’m capable of breaking a new artist into a competitive field.

Before choreographing the grand entrances and videos for “Just Dance,” “Poker Face,” “Paparazzi” and a huge chunk of Gaga’s work prior to 2011’s “You and I,” Gibson was a Fly Girl on In Living Color in the Nineties. She went on to choreograph dance moves for Missy Elliott, Diddy, Alicia Keys and the Jonas Brothers before becoming a creative director. “A choreographer deals with the movement that you create,” Gibson explains, “and with a creative director it’s about the story, the stage, the lighting, the costuming, executing someone’s idea, choosing how far to go or how little to go, and blending it so that you feel it, you’re emotionally effected.”

Asked if she feels she is molding the pop stars she works with, Gibson says, “Molding them from a place of love and wanting to see their dreams come true. With Lady Gaga I really stretched myself as a creative director, and because I was with this artist from before she got signed I was able to really take control of the opportunity and execute as a creative director.” The two stopped working together in 2011 after Gibson’s work on Gaga’s “You and I” video, ending their professional relationship due to “creative differences.”

Gaga had simply gotten to the point where she wanted to be her own creative director, she says. “Instead of fighting, I had to say, ‘Go ahead. It’s all good. We got here. Thank you,'” Gibson says. “I had a great time. I got to do so much. You don’t want to fight with someone you love and you have fun with. So it’s OK if they want to run their creative. I wish her luck.”

As for Minaj’s Grammy performance, the negative publicity has paid off, boosting anticipation for the femcee’s next single, “Starship,” which dropped yesterday. After all, a little controversy never hurt fellow rappers like Eminem or Kanye West.

As for Zolanski, this isn’t the last we’ve seen of that character. Minaj is currently writing a story and movie about her alter-ego, and Gibson confirms that they have other projects lined up together.