The mood inside Brooklyn’s Bell House on Friday night, when the Breeders kicked off a 10-date North American tour for the 20th anniversary of their classic 1993 album, Last Splash, was nothing short of flip-out celebratory. “Thanks for doing this!” a fan shouted, prompting an uproarious applause that had singer-guitarist Kim Deal blushing. The only thing missing was a birthday cake.

Barring a secret warm-up show in Kentucky, the 90-minute gig was the first time the LP’s original lineup – Kim’s sister Kelley, bassist Josephine Wiggs and drummer Jim MacPherson, plus violinist Carrie Bradley – had shared a stage in nearly two decades. The intimate, 350-capacity venue, paired with a track-by-track run-through of an Alternative Nation classic – it’s Number 80 on Rolling Stone’s list of the 100 Best Albums of the Nineties – had fans in a tizzy. The show sold out in less than two minutes; overweight, grown men were pogo-bouncing like teenagers at the Warped Tour. The room glowed with sentiment: “I first heard it when . . .” and “I remember seeing them play . . .” stories abounded.

Flashback: The Pixies Reunite at Coachella

Like the album – set for a deluxe reissue on April 23rd with era B-sides, EP tracks and live recordings – the show was charmingly rickety yet powerful, a reminder that “Cannonball” was one of the artiest songs to ever storm the charts – even by Nineties standards. Unlike their onetime tour mates Nirvana (and Deal’s first band, the Pixies), the Breeders didn’t lean on the soft-loud, verse-chorus-verse formula; Last Splash is a deeply experimental art-as-music album, full of fuzz explosions and blissed-out guitar riffs, achingly gorgeous melodies and love-drunk lyrics. The Deal Sisters’ girly charisma and bubbly chemistry topped it off. 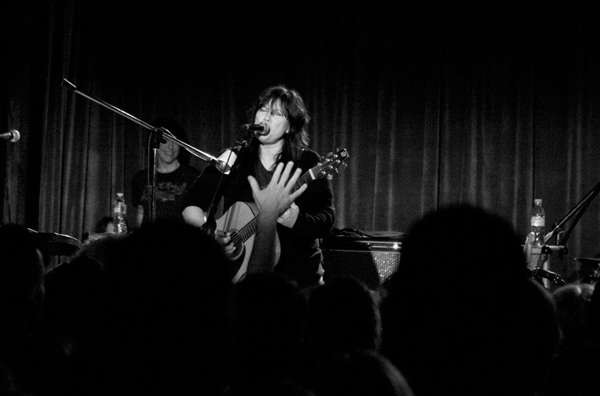 All was in fine form Friday night. Opener “New Year” chugged and accelerated into dizzying blasts. “Cannonball” was a sonic amusement ride with its hop-skip drum-and-bass lock, two-part harmonies and Kim’s distorted, broken-bull-horn vocals. It’s the instantly accessible single that Last Splash will be remembered for, but hardly the LP’s only transcendent moment.

The 15-track release has a stunning breadth, too. The Hawaiian-esque guitar riff of “No Aloha” and the meandering Moog of “Roi” – the latter featuring Wiggs on drums “because she recorded it that way,” Kim said – flaunted the album’s weirder moments, while “Divine Hammer” delivered its most straight-ahead pop sound with weaving guitar and hooky vocals. The night’s most tender blow came with “Do You Love Me Now?” on which Kim ponders, “Does love ever end / When two hearts are torn away?” The hushed sing-alongs were many.

But it all hinged on the Deal sisters’ uncontainable personalities. “Justin Bieber wrote this one,” Kim joked while introducing “I Just Wanna Get Along.” Later she stopped the intro to “Mad Lucas” to ask Wiggs a pressing question: “Could you walk here from your apartment?” Wiggs awkwardly responded, “Um . . . I could . . . but I didn’t. . . .” Kim smiled. “Okay,” she spat, returning to her guitar. And the Deal sisters were constantly whispering in each other’s ears and laughing, like they were in on the best inside joke of all time.

And they might be. The beauty of the Breeders, and their Nineties-alternative classic Last Splash, lies in this sloppy, off-the-cuff charm. When Kelley solos, you want to hold your breath and then congratulate her for nailing it. Which happened numerous times Friday night. After a member nailed a solo or technical section, the band flashed encouraging grins all around and occasionally exchanged high-fives. That’s what seals the band’s legacy.