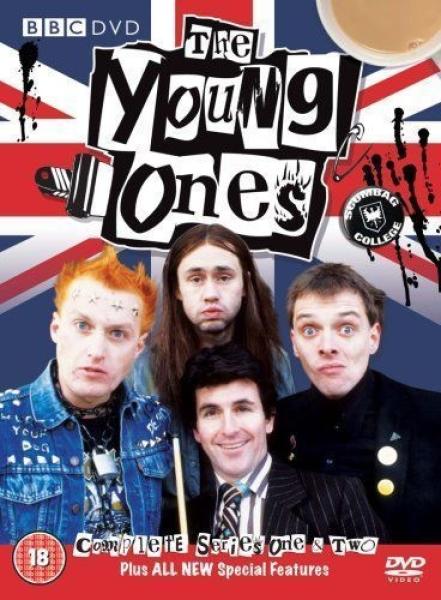 On June 9, British comedian Rik Mayall died tragically and suddenly, at age 56. Although Mayall amassed an impressive résumé of comedic credits during his three-decade career, on this side of the pond he will probably always be best known and loved — at least by children of the 1980s — as the People’s Poet, aka insufferable-but-lovable wannabe anarchist Rick, from the BBC’s punk-rock comedy The Young Ones.

In the mid-’80s, MTV ran episodes of this surreal sitcom every Sunday night, introducing America to Rik/Rick and his three North London undergrad housemates — Vyvyan the poser punk, Neil the sad-sack hippie, Mike the shady playboy — as well as a revolving cast of vegetable puppets, talking toilets, axe-wielding psychopaths, meddling slumlords, and toothy game-show hosts. And of course, there was always a fantastic house band playing at the boys’ grubby flat.

As is usually the frustrating case with great U.K. sitcoms, only a handful of Young Ones episodes were ever made (12 total, over two seasons), which meant MTV ended up airing plenty of reruns. So it wasn’t long before impressionable Stateside viewers had memorized the show’s every bizarre line and catchphrase. Those viewers probably assumed that a Season 3 was on the way, but it never came. Season 2 ended abruptly with a bus carrying Rick, Vyvyan, Neil, and Mike careening off the side of a cliff, and that was it.

And now, with Mayall gone, the series’ theme song (a ramshackle remake of Cliff Richard’s schmaltzy hit) takes on sad, literal new meaning. We may not be the young ones very long, indeed.

Along with the show’s weekly Cliff Richard tribute, almost every episode featured a random, unexplained musical performance, by some of the coolest Brit bands of the day. Since Mayall was not just the star but also the co-creator of The Young Ones, he deserves credit for ensuring that the Damned, Motörhead, and a Dexys Midnight Runners song other than “Come On Eileen” actually received substantial MTV airtime. So in honor of the late People’s Poet, here are The Young Ones‘ best musical moments:

This post-punk offshoot of the Pop Group provided the perfect soundtrack for the lads’ out-of-control house party. The soiree ended as all proper Young Ones parties should: with an extended dream sequence and poor Neil getting a boot to the head.

This sitcom supergroup (featuring Squeeze’s Chris Difford and Jools Holland and the Police’s Stewart Copeland) mimed along to Bob Dylan’s classic in the “Cash” episode. Longtime Young Ones fans will surely get a little homesick for the blokes’ squalid old house when watching this rare clip, which for years wasn’t included on the show’s DVDs for legal reasons.

Really, EVERY episode of The Young Ones featured a house of fun, didn’t it? Madness was the only act to ever appear on the show twice, also performing the hit “Our House” on the series’ penultimate episode.

Yes, Dexys did have other singles. This one, a Van Morrison cover, was the follow-up to “Come On Eileen,” and it went top five in Britain. And this performance is certainly a top five Young Ones moment.

Rick and his intellectually challenged flatmates didn’t exactly ace the “University Challenge” quiz of Season 2’s premiere, but Lemmy Kilmister and company sure provided these losers with a winning, rawking soundtrack.

Arguably the best Young Ones installment ever, and certainly a cooler vampire-themed episode than anything the creators of True Blood or Vampire Diaries could come up with, “Nasty” didn’t just feature this bloody great Damned cameo but a few lines of David Bowie’s “Ashes to Ashes,” crooned by Rick during a drop-dead-funny funeral scene.