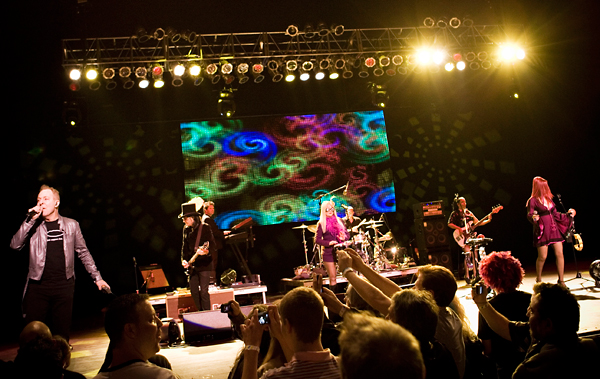 They didn’t really know what they were doing – didn’t even totally know how to play their instruments, if they were being honest. But back in 1977, a couple of the band’s friends were holding a Valentine’s Day house party at a place on Milledge Ave. in Athens, Ga., just across the street from where the Dunkin’ Donuts sits today. The B-52’s – a band that would christen itself after the beehive hairdo that bore an aesthetic similarity to a Boeing-designed strategic bomber – were playing for 25 or so people, who were dancing like crazy. The band set up in the foyer, the audience was in the living room. It was cramped, but there was a keg. Someone was taking photographs of hands, feet, dresses, legs. The floor was about to cave in.

“We weren’t really a band at the time,” Keith Strickland tells Rolling Stone. “But Fred [Schneider, B-52’s frontman] said we were, so then we had to be one, and we had to shore up some songs. I think we [ended up] with about six, which were ‘Rock Lobster,’ ‘Planet Claire,’ ‘Lava,’ ‘Killer Bees’ and ‘Strobe Light.'”

Last night, just about a mile and a half from that house, and 35 years nearly to the day of that very first, awkward, performance-art of a performance, the B-52’s played the Classic Center in downtown Athens. But it felt less like a couple thousand people housed within a fancy venue and more like a gathering of old friends – ones who came bedecked in pinstriped blazers with leopard-print lapels, colored wigs, and lights draped or attached all over their bodies, but old friends nonetheless.

Unsurprisingly, it was also a tribute night of sorts to Athens itself. From local upstarts Tunabunny, who were recommended as an opener to Schneider by the folks at legendary local record store Wuxtry, to the local Terrapin Beer Company brews flowing in and out of flimsy plastic cups, to the “sometimes you wanna go where everybody knows your name” vibe of the crowd itself. The whole event practically screamed “quintessential college town.”

For their part, the B-52’s brought the party. Schneider’s speaksinging delivery, one of the most recognizable in all of pop music, still sounds great. Kate Pierson’s pipes are stunning despite three-and-a-half decades of wear, and Wilson and Strickland strut like it’s the Seventies. Songs like “Hot Corner” and “Roam” earned massive responses, thanks in no small part to their Classic City connections, and the latter was especially emotionally resonant, pairing the group’s globe-hopping past with its homecoming present. They played a handful of tracks from 2008’s Funplex, and those songs went over fine, but it was clear on both sides that this was going to be a hits showcase.

Then there’s that moment when “Love Shack,” a ubiquitous cultural force, karaoke hall-of-famer, wedding dance-floor igniter and grocery-store staple, comes to life in front of a group of people and the group goes completely bonkers. Even the most steadfast of the crowd’s non-dancing throng seemed moved to stand up and shake it, if only just a little bit. The security guards even lost it.

With the recent disbanding of R.E.M., the B-52’s became the last remaining vestige of Athens’ college-rock origins, the final band from that first wave of talent that gave the town its first real musical presence, opening the metaphorical door for future bands as varied as Neutral Milk Hotel, Widespread Panic, Of Montreal and Drive-By Truckers. That history is not lost, it seems, even in one of Athens’ latest buzzy acts, Tunabunny, who opened the show with its noisy, art-damaged pop, receiving welcoming and rapturous applause in return for its unhinged music.

“Athens is a great place for music, and it’s not always perfect,” Tunabunny singer/guitarist Brigette Herron said as a precursor to the final song of the band’s set. “We have the B-52’s to thank for that.”

Her sentiment echoed that of  Strickland earlier in the day, sitting behind the stage on which she spoke those words. “I remember listening to that Patti Smith song,'” Strickland said. “She had this lyric, ‘Dip into the sea of possibilities.’ That was my mantra in those early days. Anything can happen. You can do it.”