The 'American Idol' Matrix: Why It's Tough to Create a Superstar - Rolling Stone
×
×

American Idol may be given its last best chance to prove its relevance this year.

Though the wildly popular singing competition has launched a handful of popular stars, the show hasn’t proved to be the superstar-generating machine it was originally billed to be when it began over a decade ago. The launch pad the show gives artists fails to catapult contestants from obscurity to the A-list 70 percent of the time. Superstardom, as we popularly define it – sold-out stadiums, several platinum albums, an eponymous fragrance, and endorsement deals from Chevy – hasn’t come to former winners Ruben Studdard, Jordin Sparks, Fantasia Barrino, David Cook, Kris Allen, Lee DeWyze or Scott McCreery.

In my book Celebrity Inc.: How Famous People Make Money I speculate that it is because Idol is a moneymaking endeavor first, entertainer second, and star-maker third (in order of importance). Each Idol who signs a record deal following the show becomes a business unit in the asset portfolio of the label (Sony until 2010, then Universal Music Group) and Idol management company, 19 Entertainment.

I classify previous Idol winners and the occasional runner up lucky enough to get a contract through the Boston Consulting Group (BCG) growth-share matrix, a business tool oft used to classify successful and struggling business units in a company.

The model is predictive. If you’re a cute, sugary sweet sometimes blonde your potential for success according to the matrix is quite high. If you’re a dude’s dude with a penchant for artfully mussed hair and flannel all bets are off (unless you’re Daughtry) and if you’re a poppy gay then things are still up in the air.

The matrix has four categories: Star, Cash Cow, Problem Child, and Dog. Stars make money, Dogs don’t, and the other two exist in purgatory somewhere in between. 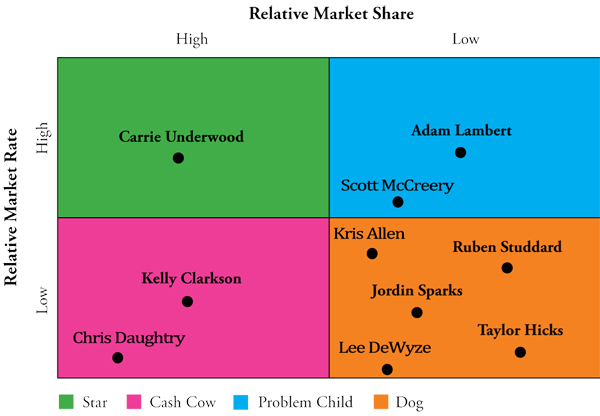 STARS
A Star is a performer in a high-growth market with a relatively high share of that market. Stars not only sell lots of albums, but they are also eminently likable and therefore salable across other platforms. They get lots of endorsement and licensing deals. Carrie Underwood is the epitome of a Star. Not only has the diminutive blonde country powerhouse sold more than 11.57 million albums (which gives her a high market share), but her brand strength continues to grow through endorsement and licensing deals, because she is enormously likable. On the Davie Brown Index (DBI) of likability she has a score of 80.57, by far the highest of any Idol contestant. She is also aspirational to her fans, because she cultivates her celebrity. Underwood first played the celebrity dating game by being linked romantically to Dallas Cowboys quarterback Tony Romo and Gossip Girl actor Chace Crawford, and in 2010 she married Ottawa Senators hockey player Mike Fisher. She is entirely inoffensive and, despite marrying a Canadian, is apple-pie all-American with her blonde hair and blue eyes – which makes her the ideal brand spokeswoman for companies like Vitaminwater and Olay.

CASH COWS
The Cash Cow is a performer with high sales in a low-growth market. After starting out a Star, Kelly Clarkson became a Cash Cow in 2011, nearly nine years after her Idol win. It’s a terrible title but not a bad market position. Over the course of her nine-year career, Clarkson has sold around 11 million albums, including half a million in sales for her most recent release, Stronger. Though she consistently performs well on the charts and continues to sell, the pop audience has changed since her 2002 win. It keeps getting younger. By 2010, artists like Justin Bieber, Ke$ha, Miley Cyrus, and Lady Gaga were cutting significantly into Clarkson’s fan base of tweens and teenagers. Additionally, the entire rock market – of which Clarkson (and pop generally) is a part – declined by 16 percent in 2010. And unlike Underwood, Clarkson simply doesn’t have the kind of celebrity personality that excites the tabloids and endears her to the public, which makes her less sought after by brands.

PROBLEM CHILDREN
In 2009, Season Eight runner-up Adam Lambert eclipsed that year’s winner Kris Allen from the very start and has since been the quintessential Problem Child for 19 and Sony. The eyeliner-wearing glam rocker recalled a punk aesthetic while belting out poppy dance anthems like Madonna and Lady Gaga. Lambert’s edginess was both an asset and a liability. In 2009, the market was looking for the “other,” but Lambert was a loose cannon, and that could hurt potential sales. If the Idol Machine picked him up, he could be trouble from the start – yet with the potential for a high payout. Lambert’s position in the matrix could shift up or down following the release of his new album, Trespassing, in March.

Lambert has potential, but his brand needs constant nurturing and policing to survive. Problem Children can become Stars or Dogs. They have the potential for high growth but they require significant investments of time and money and a lot of nurturing.

DOGS
When Taylor Hicks won American Idol in 2006 you could tell Simon Cowell was dying a little inside that the winner was not Katharine McPhee. After his first album sold only 704,000 copies – the lowest of any Idol winner up to that point – Arista (a division of Sony), 19 Entertainment and Hicks broke up in 2006.  What is clear is that Hicks had been labeled a Dog. A Dog has low market share in a low-growth market. Hicks’s genre of bluesy rock had little potential for radio airplay and was difficult to market. There was no growth to be had. His first album only proved his critics right when it sold fewer copies than any previous Idol winner’s. Kris Allen and Lee DeWyze would later have debut albums with much worse sales than Hicks’s (around 326,000 and 133,000 respectively), and they, too, have since been labeled Dogs. What do all these canines have in common? They’re men and they’re not obviously pop singers.

Take a look at the Idol contestants next time they take the stage together during the show’s Hollywood Week. Think about the music you and your friends listen to. Think about who looks like a star. That seems to matter when it comes to future long-term album sales. When America votes, however, it doesn’t think about these things. People vote with their hearts and not their wallets. That’s what makes America so special.