The Old Taylor can’t come to the phone? Long live the New Taylor. Reputation is one of this fall’s most tightly guarded secrets; Taylor Swift‘s sixth album is her first in three years, her longest vacation ever. So far, each Swift LP has been a major musical departure. But this time, she isn’t letting any secrets slip, declining interviews and, somehow, avoiding paparazzi detection wherever she may be. All we have to go on is a quote from a source close to the project who tells Rolling Stone, “Reputation is lyrically sharper and more emotionally complex than 1989. This music has and will continue to speak for itself.”

So what do we know about Reputation? We know it has 15 songs; “…Ready For It?” will be the first track and “Look What You Made Me Do” will be the sixth. We know it drops on November 10th, which happens to be Richard Burton’s birthday. (What if that makes Reputation the Burton to Taylor’s Taylor? What if she is about to marry herself and embrace her muse as her soulmate?) It’s one day before the nine-year anniversary of Fearless, which came out in 2008 on November 11th, whereas she usually prefers to pounce in late October, as she did with Speak Now, Red and 1989. So here’s a rundown of all the clues to the burning mysteries around Reputation – what we know for sure, what we wonder, what we want, what we hope.

All 115 of Taylor Swift's Songs, Ranked

The sound. The first two singles are moody electro-pop: the Hot Topic quasi-goth blare of “Look What You Made Me Do” (produced by Jack Antonoff) and the hip-hop island breeze of “…Ready for It?” (produced by Max Martin, Shellback and Ali Payami). “Look What You Made Me Do” is Sal-Tay in supervillain mode; “…Ready for It?” is sultrier and far superior. Neither sounds like any of her previous work. But drastic swerves are what Swift does. All five of her previous LPs have developed a sound she could have milked for years – but she’s never made the same record twice, even when that’s what everybody wanted, from her record company to her fans.

Last time the world was hoping for Red II: Fifty Shades Redder, Red III: Revenge of the Scarf or Red IV: Maple Latte Massacre, but instead she made 1989, an album as far from Red as Speak Now was from Fearless. Nobody sane would have advised her, “You know what you should do next? Make an album that sounds nothing like Red, but exactly like Erasure or the Pet Shop Boys.” Yet Swift followed her own muse and turned out to be right – when it comes to high-risk moves that pay off, she’s gone five for five. So whatever she tries on Reputation, it won’t be what she did last time.

The romance. The line that jumps out from “…Ready For It?” is “He could be my jailer / Burton to this Taylor.” Not her usual kind of love story. Richard Burton and Elizabeth Taylor got married and divorced twice, which by 1970s standards made them the ultimate glamour couple – even Sonny and Cher only got to break up once. Their boozy jet-set affair lasted a total of (hmmm) 13 years, despite the fact that they basically loathed each other. Burton was fond of referring to Liz as “MGM’s Little Miss Mammary,” while she called him “the Frank Sinatra of Shakespeare.” By the time Liz was Swift’s age, she was on Husband Four; Burton was Five (and Six). So Liz and Dick weren’t exactly Romeo and Juliet – their Shakespearean duet was a 1967 film adaptation of The Taming of the Shrew. Fans have speculated the song is her ode to her beau of the past year, British actor Joe Alwyn – currently filming Mary Queen of Scots, where he plays the lover of Queen Elizabeth. Burton once got an Oscar nomination playing her father, King Henry VIII.

The playlist. Her Spotify playlist “Songs Taylor Loves” is loaded with sad weepy ballads – the side of her music missing from the two new singles. It’s also full of younger artists – from pals like Selena Gomez and Ed Sheeran to country upstarts like Maren Morris and Brett Young to indie brooders like the National and Bon Iver. But none of the legendary names Swift usually loves to invoke – the girl named after James Taylor isn’t bumping “Fire and Rain” these days. Is the playlist representative of her new music? Or is she digging these tearful ballads because she’s no longer writing them?

The cover. She’s wearing black lipstick, clearly a sign that Old Taylor is dead, given her affection for the red-lip classic thing. She gazes blearily through newspaper headlines spelling her name – math experts have counted her name on the cover 899 times. The cover’s weirdest detail: the Richard Hell-like torn sweatshirt, stitched up to create five triangular peaks, one for each previous album. 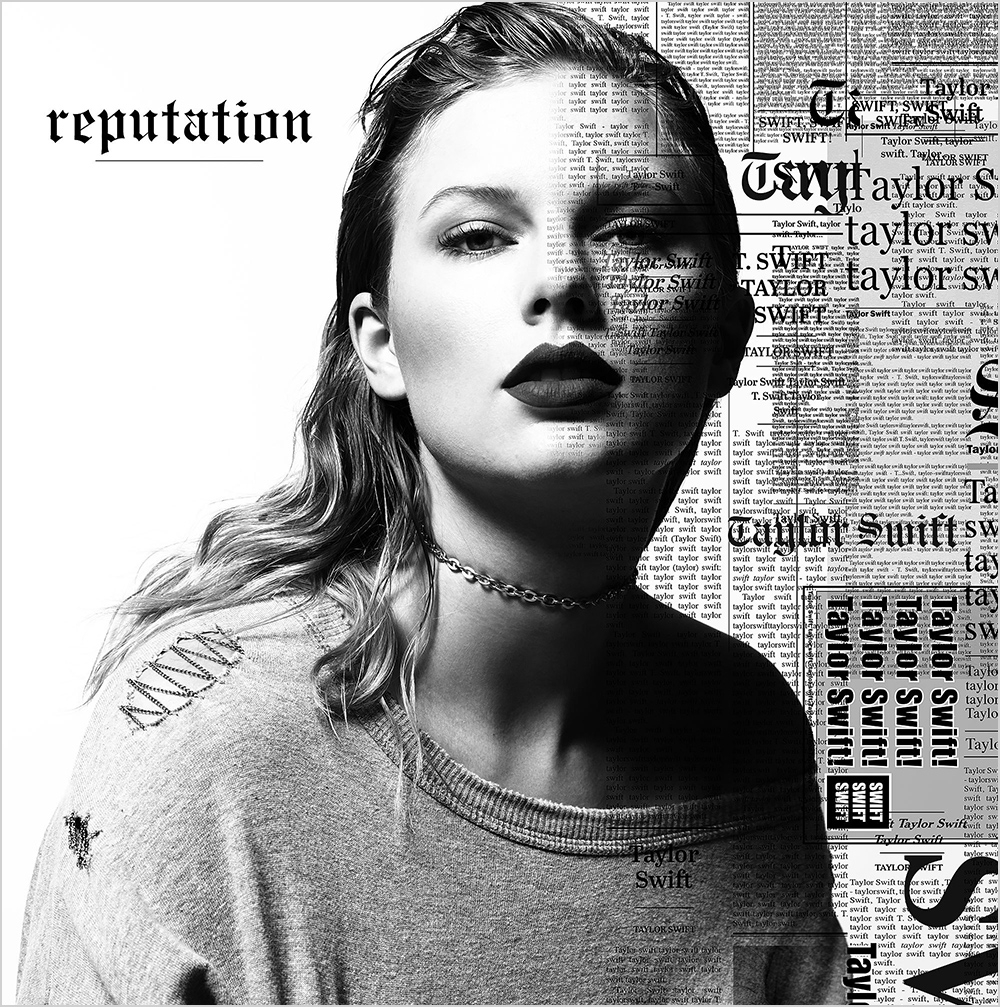 There will be no further explanation. There will just be reputation.

The snakes. She’s teased the album with serpentine imagery – want to buy a $60 Gold Snake Ring? Either she’s a budding herpetologist or she’s reviving her Kimye feud. You remember – from last summer, before Kanye’s 5150 or his rock-bottom moment ass-kissing the new President. But it’s safe to surmise the feud factor will be the least intriguing aspect of Reputation, since her celebrity conflicts have been fruitless musically for all the artists involved. “Look What You Made Me Do” is much stronger than Katy Perry’s “Swish Swish” or Kanye’s “Famous,” but that’s hardly an achievement given how those remarkably wretched gaffes sandbagged the albums they were intended to launch. All evidence indicates that we’re in a post-beef era where nobody cares about pop-star feuds, since we’ve got more pressing problems. Swift sending Cardi B flowers to congratulate her on “Bodak Yellow” hitting Number One – even though it replaced “Look What You Made Me Do” – is much more in step with the 2017 zeitgeist than snake emojis, which are so last year. And you have to love how Cardi B made sure to document the flowers on Instagram, to thwart any would-be Cardor truthers.

The Drake factor. Be on guard for Drizzy content. Last year, while the rumor mill was full of reports of them hanging out and possibly working together, the two did linked Apple Music ads, one with Taylor lip-synching the Drake/Future collabo “Jumpman” and the other with Drake doing “Bad Blood.” Since Aubrey Graham is the only pop star on earth who can approach Tay’s feelings-per-minute ratio, the mind reels at how they might sound together – let’s just say they could go from zero to 100 real quick.

The shirt. The “Look What You Made Me Do” video ends with an attention-grabbing shot of Swift in a “Junior Jewels” t-shirt decorated with her friends’ names. Squadologists plotzed at the roll call, from Patrick Stewart (he’s on it twice? Make it so!) to Abigail (the “Fifteen” bestie whose wedding had Swift as a bridesmaid last month). Who’s lurking on the back of the shirt? And who’s a blank space? The most high-profile absence was Karlie Kloss, currently seen in a new Cole Haan ad campaign with well-that-escalated-quickly pal Christy Turlington. (In Elle a few weeks ago, K.K. gushed, “I am surrounded by extraordinary women – from my mom and sisters to role models like Christy Turlington, Melinda Gates, and Sheryl Sandberg, and many more.”) Will Reputation offer a state-of-the-squad update?

The exes. Just because Swift seems to be in a functional relationship, is that any reason she should keep a dignified silence about her Long List of Ex-Lovers? Dignified silence is not this lady’s style. Between Tom Hiddleston and Calvin Harris, she has some real content opportunities. In the new video, Zombie Tay digs a grave marked “Nils Sjoberg,” her ghostwriting pen name; there’s also an empty engagement-ring box. Perhaps she’s mocking Harris for both his career and love life, given that Nils Sjoberg is an anagram for “Jobless Ring”? Or maybe she’s accusing him of swiping her work, since it’s also an anagram for “Robs Jingles”? Or maybe – just maybe – anagrams are meaningless and dumb coincidences?

The tour. One thing Swift has made clear over the years – she’s not into looking back. In the spirit of Madonna or Bowie, when she tours, she focuses on the new songs, not the hits of yesteryear. It was a shocker when she left “All Too Well” off most stops of the 1989 tour, just as she left “Enchanted” and “Long Live” off the Red tour. But given the choice between reprising the oldies or showing off her new songs, she’ll go new every time. And that goes for her albums as well – she’s never been an artist who repeats herself. Don’t expect her to start now. “Honey, I rise up from the dead, I do it all the time”? Bring on the New Tay-stament.