Vampire Weekend helped close out SXSW 2013 last night with a crowd-pleasing after-midnight set at Stubb’s BBQ. It was a moment-of-truth performance for the band – their first full U.S. show in nearly a year, and their first opportunity to share several songs from their highly anticipated third album, Modern Vampires of the City (due out May 7th), with the public. If this was a test, Vampire Weekend passed it with flying colors.

The four band members took the stage at 12:20 a.m., with the appropriately bombastic opening bars of DMX’s 1999 banger “What’s My Name” blasting loudly over the P.A. to announce their arrival. The packed crowd, already primed after a four-alarm blazing opening set by L.A. sister act HAIM, jumped for joy to see their heroes back again. Vampire Weekend leapt without preamble into an adrenaline-laced rendition of 2010’s nervy “Cousins,” and they were off – frontman Ezra Koenig singing with a sped-up swagger, Rostam Batmanglij bashing away at a second guitar, bassist Chris Baio pogoing in place and drummer Chris Tomson lost in a blur of rhythm.

The next few songs were all greeted with big cheers, especially 2008’s fan favorite “Cape Cod Kwassa Kwassa” and 2010’s “White Sky.” Here was the Vampire Weekend this audience knew, with its sprightly blend of Afropop influences and collegiate wit, and they clearly adored it. But all that was just a palate-cleanser. After four familiar tunes, Koenig tossed his ivory sweater aside. It was time for the first new song of the night: “Diane Young,” the jittery electro-rockabilly jumper that will be released as Modern Vampires of the City‘s first single on Monday. There was a hint of anxious energy in the air as the band began playing; the audience fell quiet during the first chorus, which features tweaky pitch-shifted vocals from Koenig (manipulated in real time by Batmanglij). By the second time the chorus came around, there were whoops of approval rippling through the venue. When the song ended in a last burst of manic energy, the house responded with solid applause. One guy even shouted, “Play it again!” 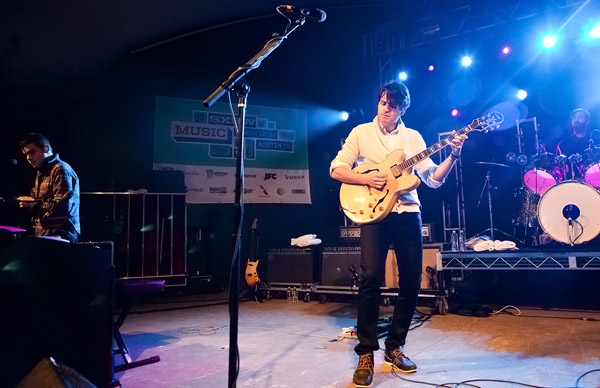 The band pivoted with ease back into 2010’s “Holiday” and “California English” – songs that Vampire Weekend perfected on the lengthy world tour for their previous album and before. Koenig smiled wide as they got the crowd bouncing on its heels with 2008’s “A-Punk,” then switched to an acoustic guitar for “Unbelievers,” the cheerfully death-obsessed new song that they debuted on TV last fall. He took a modest theatrical bow at the end, much appreciated by the audience.

The main set ended with a few more reliable older numbers. When Vampire Weekend first released 2008’s “Campus,” they were barely out of the undergrad world in which the song is set; now, seven years after graduation, it’s become a song of fond nostalgia. Koenig rolled up his sleeves and arched a puckish eyebrow as the band segued seamlessly into “Oxford Comma,” once their signature song in that early era. Everyone in the band was grinning as the crowd sang along to every word. 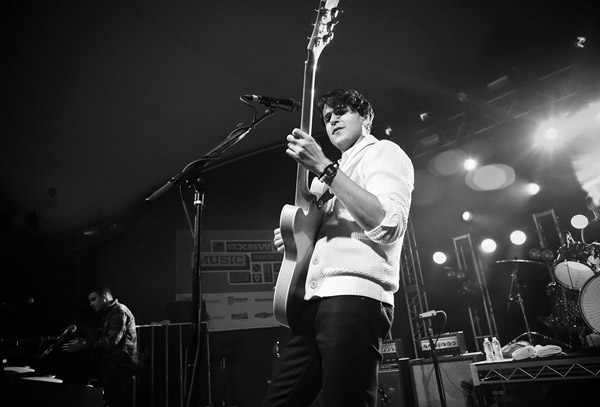 Fans cheered for “one more song” after the band closed with a spirited spin through 2010’s “Giving Up the Gun.” It barely took a minute for the band to re-emerge from backstage. “We’ll do more than one,” Koenig said with a smile,” since you guys are so nice.” They began the encore with another brand new song: “Ya Hey,” a bittersweet ballad with reggae-influenced lyrics about Babylon, Zion, fire and the paranoid style. After a heartbreaking version of 2010’s “I Think Ur a Contra” and a giddy call-and-response on 2008’s “One (Blake’s Got a New Face),” they sent us home with 2008’s wistful “Walcott.” Arms were waving slowly all through the BBQ as the show came to a gentle close at 1:35 a.m. Just about everyone went home happy.